Read Ford’s written testimony: “I am here today not because I want to be. I am terrified.” 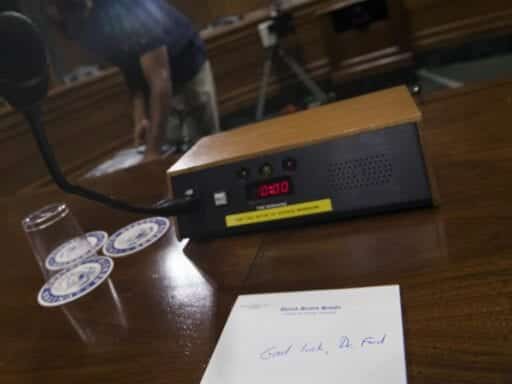 “My motivation in coming forward was to provide the facts about how Mr. Kavanaugh’s actions have damaged my life.”

Christine Blasey Ford’s written testimony for Thursday’s Senate hearing with Supreme Court nominee Brett Kavanaugh begins with a stunning, simple summary of why she has come forward with an accusation of sexual assault against a man who could soon be one of the most powerful people in the country.

“I am here today not because I want to be. I am terrified,” Ford writes in the testimony, which was posted online Wednesday afternoon. “I am here because I believe it is my civic duty to tell you what happened to me while Brett Kavanaugh and I were in high school.”

She describes her childhood in Bethesda, Maryland, and the social scene involving her all-girls alma mater Holton-Arms and Georgetown Prep, the all-boys school that Kavanaugh attended.

“This is how I met Brett Kavanaugh, the boy who sexually assaulted me,” Ford writes.

She goes on to recount the day of the alleged assault, which Kavanaugh has repeatedly and unequivocally denied. (He has also denied accusations of sexual misconduct from two other women: Deborah Ramirez and Julie Swetnick.)

Ford says that after swimming at Columbia Country Club, she went to a small gathering of friends at a house in the Washington area. She says she had one beer while at the house but that Kavanaugh and his friend Mark Judge were “visibly drunk.”

She then begins to describe the alleged assault:

Early in the evening, I went up a narrow set of stairs leading from the living room to a second floor to use the bathroom. When I got to the top of the stairs, I was pushed from behind into a bedroom. I couldn’t see who pushed me. Brett and Mark came into the bedroom and locked the door behind them. There was music already playing in the bedroom. It was turned up louder by either Brett or Mark once we were in the room. I was pushed onto the bed and Brett got on top of me. He began running his hands over my body and grinding his hips into me. I yelled, hoping someone downstairs might hear me, and tried to get away from him, but his weight was heavy. Brett groped me and tried to take off my clothes.

“I believed he was going to rape me. I tried to yell for help. When I did, Brett put his hand over my mouth to stop me from screaming,” Ford says. “This was what terrified me the most, and has had the most lasting impact on my life. It was hard for me to breathe, and I thought that Brett was accidentally going to kill me.”

Kavanaugh and Judge, according to Ford, “were drunkenly laughing during the attack. They both seemed to be having a good time.”

Ford writes that at one point, Judge jumped on the bed, Kavanaugh fell off her, and she ran out of the room and left the house. She also offered an explanation for why she did not report the assault immediately to the police or her parents.

“I did not want to tell my parents that I, at age 15, was in a house without any parents present, drinking beer with boys,” Ford says. “I tried to convince myself that because Brett did not rape me, I should be able to move on and just pretend that it had never happened.”

Ford then recounts what she shared with her husband and friends over the years about the attack, her struggle to decide whether to come forward once Kavanaugh’s Supreme Court candidacy picked up steam, and what her life has been like since her story became public.

She ends with another explanation of why she has come forward.

“My motivation in coming forward was to provide the facts about how Mr. Kavanaugh’s actions have damaged my life, so that you can take that into serious consideration as you make your decision about how to proceed,” Ford testifies. “It is not my responsibility to determine whether Mr. Kavanaugh deserves to sit on the Supreme Court. My responsibility is to tell the truth.”

In his own written testimony, Kavanaugh says that while he is “not questioning that Dr. Ford may have been sexually assaulted by some person in some place at some time,” he has “never done that to her or to anyone. I am innocent of this charge.”

You can read Ford’s full testimony on Document Cloud or below.