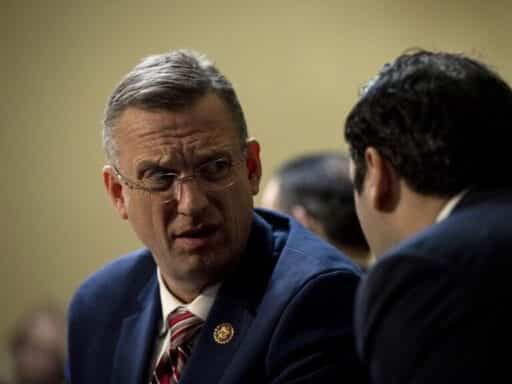 “No matter what was said today,” Collins said, “this is not a solemn occasion. When you go looking for something for three years … you ought to be excited when you found it.”

The first Republican in the House of Representatives to speak in Wednesday’s historic debate on the articles of impeachment against President Donald Trump was Rep. Doug Collins, ranking member of the House Judiciary Committee and a faithful ally of the president.

During the public hearings leading up to Wednesday’s debate, Collins was one of the fiercest defenders of Trump, passionately (and at times heatedly) putting forth the Republican case against impeachment and slamming Democrats for having wanted to impeach Trump since day one of his presidency.

And, true to form, Collins’s opening statement on the House floor was a vehement denunciation of the entire impeachment process, delivered with his characteristic tone of indignation. “From the very moment that the majority party in this house won, the inevitability that we would be here today was only a matter of what date they would schedule it,” Collins said.

Responding to House Speaker Nancy Pelosi’s opening statement, in which she called the day “solemn,” Collins said, “When you go looking for something for three years and especially this year since January, you ought to be excited!”

It is certainly true that some members of the Democratic caucus — including Reps. Rashida Tlaib and Al Green, both of whom Collins mentioned by name in his speech — have long called for Trump’s impeachment. Shortly after being sworn in, Tlaib told a crowd of supporters, “‘We’re gonna go in there and we’re gonna impeach the motherfucker!’”

But contrary to what Collins and other Republicans have claimed, the House Democratic leadership didn’t rush to impeach Trump, and Pelosi herself worked to tamp down talk of impeachment following the revelations of the Mueller report.

Of course, that has since changed, and Pelosi has since come out in favor of impeachment — a fact Collins used to attack the impeachment process: “Even Speaker Pelosi said it would be dangerous to leave it to voters to determine whether President Trump stays in office. Really?”

Collins went on to complain about the way Democrats have handled impeachment, calling the process “deplorable” and “awful.” He impugned the rhetoric used by Democrats, describing some of their statements as “below the dignity of this body.”

And he closed with his spin on the articles of impeachment themselves, calling both weak.

“We’re going to talk about two articles of impeachment,” Collins said. “Abuse of power, because they can’t actually pin anything of factual basis on him, the president did nothing wrong in this issue. And they’re going to talk about obstruction of Congress. You know, ‘obstruction of Congress’ is like petulant children saying we didn’t get our way when we didn’t ask the right way and didn’t try to make a case.”

Of course, Democrats would argue they have a mountain of evidence gathered through their hearings and closed-door sessions with witnesses to support those articles. Those arguments have indeed been made, and will be heard again during the six-hour impeachment debate Wednesday.

But despite what Collins said and what his colleagues will say over the next several hours, President Donald Trump will almost certainly be impeached today. However, Collins’s words were as cogent a summary as any of the way Republicans are shielding the president from the fallout of that reality.

And we are here today to enter into a debate that should surprise no one. This has not been a surprise, and it’s not even something that we would have not thought about. From the very moment that the majority party in this House won, the inevitability that we would be here today was only a matter of what date they would schedule it. Nothing else.

In fact, how it even began even to look even further was on September 24, the speaker announced an impeachment inquiry before even seeing the call transcript that we’re going to hear so much about today.

You know, it’s not about what this body can do and its constitutional oath. There’s been a lot of constitutional and founders thrown around — and will be all day today.

But there’s one thing I will mention all along and that is also the founders were very concerned about a partisan impeachment in which politics of the majority who have their strength can do what they want to do irregardless of any facts.

In fact, I said it before and I will say it again: I do not believe no matter what was said today and even what has been said, this is not a solemn occasion. When you go looking for something for three years, and especially this year since January, you ought to be excited when you found it. But they can’t because what is now happening — it took me last night but I was thinking about it, why do we keep calling this a solemn occasion when you’ve been wanting to do this ever since the gentleman was elected. Mr. President came forward and did what he thought fit for the American people, but yet they wanted to impeach him.

How do I know this?

One of our members, Ms. Tlaib, said on the night she was sworn in, “We’re going to impeach …” Well, you know the rest. In May of 2019, Al Green said, “I’m concerned if we don’t impeach the president, he’ll get reelected.” That is probably the most prescient thing said by the majority in the last year is they said, “We can’t beat him if we don’t impeach him.”

I will tell you right now, Madam Speaker, we on the Republican side have no problem taking our case to the majority and to the people of this country because they elected Donald Trump and it is a matter for the voters, not this House, not in this way, not in the way this is being done. It has trampled everything this house believes in.

I will fight the facts all day long, because when we found here today is a president who did not do as being charged: In fact they had to go to abuse of power, this amorphous term that you’re going to hear many, many arguments about how that abuse of power, except for one thing, the call itself, the two parties say no pressure, nothing was ever done to get the money, in fact they didn’t even know the money was held.

But there is something that very much bothers me about the facts.

There were five meetings — we’ll hear about those today — in which there was never a linkage made. There was one witness depended on 600 times in the majority’s report that in the end after questions had to say, well, that was my presumption of what was happening.

You see, this is an impeachment based on presumption. This is a poll-tested impeachment on what actually sells to the American people. Today is going to be a lot of things. What it is not is fair. What it is not is about the truth. What is true today, and I just heard it a moment ago, in the articles themselves, where it said, and the speaker I believe actually talked about about this, is the president weakened a foreign leader.

You know what the truth of the matter is?

Madam Speaker, the most interesting and deplorable thing I’ve heard over the last few weeks is the actually attack by the majority on [Ukrainian] President [Volodymyr] Zelensky, because they realize their whole crux of their case is if he was not pressured, their house of cards falls. And by the way, it’s already fell.

But if we can’t show pressure, then we either have to call him a liar, a world leader, or we have to make up names to call him. And that’s exactly what happened in Judiciary Committee when a member of the majority actually said he’s acting, or they’re comparing him to a battered wife.

That is below the dignity of this body, to take a world leader and when he doesn’t make your case for you, to belittle him, especially, as is often said by the majority, that they’re in the middle of a hot war with Russia. You see, President Trump actually did give them offensive weapons. President Trump did nothing wrong. We’re gonna talk about that all day today. We went on process and we went on facts. Why? Because the American people see through this.

But before I close this first part, I will have to recognize that even the Senate, the minority leader in the Senate, recognized that the House did not do their job, because he can’t make the case to his own members, so he’s having to ask for witnesses, ask for more time. You see, and even yesterday, it’s sort of funny, I thought it hilarious that the minority leader in the Senate went out and did a press conference and said, They denied my witnesses, they denied my requests.

“Abuse of power,” because they can’t actually pin anything of factual basis on him, the president did nothing wrong in this issue. And they’re going to talk about obstruction of Congress. “Obstruction of Congress,” I’ve said before, is like petulant children saying we didn’t get our way when we didn’t ask the right way and didn’t try to make a case. You know why, Madam Speaker?

The clock and the calendar are terrible masters.

And the majority will own that problem today because to the clock and the calendar, facts don’t matter. The promises to the base matter. And today is a promise kept for the majority. Not a surprise, a fact. And with that I reserve.

Cyclist gives Donald Trump the middle finger
Let’s talk about the ending of The Half of It
It’s time to take Trump both seriously and literally on Russia
Joe Biden reacts to his presidential victory: “It’s time for America to unite and to heal”
Trump’s 2020 message: “Depraved” Democrats “want to destroy you”
Twitter’s stance on Infowars’ Alex Jones should be a moment of reckoning for users