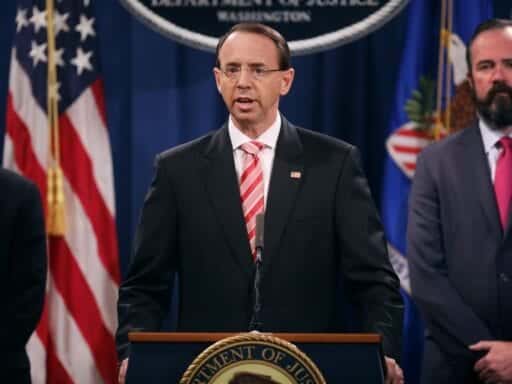 President Trump’s conservative allies in the House of Representatives have moved to impeach Deputy Attorney General Rod Rosenstein, claiming that he committed “high crimes and misdemeanors” for failing to turn over requested documents and obstructing oversight by Congress.

Republican Reps. Mark Meadows (NC) and Jim Jordan (OH), both members of the House Freedom Caucus, filed the resolution late Wednesday. It’s an incredible escalation of a war between the Department of Justice and Trump’s allies in Congress that’s been brewing for months.

“For 9 months we’ve warned them consequences were coming, and for 9 months we’ve heard the same excuses backed up by the same unacceptable conduct,” Meadows said in a statement. “Time is up and the consequences are here. It’s time to find a new Deputy Attorney General who is serious about accountability and transparency.”

This impeachment resolution is the culmination of a showdown between the House and the Department of Justice over the House’s subpoenas for documents related to the FBI’s investigations into Trump campaign aides’ Russia ties and investigations related to Hillary Clinton from 2016. House leaders allege that Rosenstein stonewalled their requests, failing to turn over the requested documentation by the required deadlines, or restricting access to certain materials.

The Justice Department, on the other hand, has maintained that it’s complying with the subpoenas and has already turned over hundreds of thousands of documents. Bloomberg reports that the Department of Justice has built out two reading rooms, and the FBI has written new software code just to meet Congress’s demands.

The articles of impeachment were filed shortly after Meadows and other House leaders met with DOJ officials about compliance with the subpoenas.

Filing articles of impeachment is a big deal — but it’s very unlikely at this point that the House will vote on the measure anytime soon.

Meadows avoided a procedural measure that would have forced a vote this week. And timing is everything: The House is headed off for summer break on Thursday, which means this probably won’t be dealt with until lawmakers return in September — weeks before the midterms, where Republicans are looking more and more vulnerable. The GOP might not have the appetite to undertake such a politically charged move, one that could reveal deep cracks in the Republican caucus.

Meadows and Jordan have floated the possibility of impeaching Rosenstein, or holding him in contempt of Congress, for weeks, and they’ve been steadily building to this point with a campaign against the deputy attorney general. In June, the House voted along strict party lines to demand Rosenstein comply with document requests. Last week, Meadows and Jordan demanded the DOJ Inspector General investigate Rosenstein for alleged threats to Congressional aides.

But the idea for impeachment hasn’t gotten much traction with House leadership, including from House Speaker Paul Ryan (R-WI) and Rep. Trey Gowdy (R-SC), the chair of the House Oversight Committee. Both men have expressed confidence that the Justice Department is working toward meeting Congress’s document demands.

“I’m not a big fan of drama,” Gowdy told the Washington Post Wendesday afternoon, shortly after meeting with the DOJ officials. “Impeachment is a punishment, it’s not a remedy. If you’re looking for documents, then you want compliance, and you want whatever moves you toward compliance.”

Other Republicans have already come out against the measure. Sen. Lindsey Graham (R-SC) told Bloomberg earlier Wednesday it would be more likely Rosenstein would play in the NBA than get impeached. Sen. Jeff Flake tweeted that “he does not agree” with the move to impeach.

This Senate Republican does not agree https://t.co/ItTLIHD71n

Impeachment does seem unlikely — it’s only happened to one Cabinet member in US history. But this is still an extraordinary move by House Republicans, who are attempting to impeach a top Justice Department official in an administration controlled by their own party.

Then again, Trump — who appointed Rosenstein — has joined in the attacks against his own Justice Department.

A Rigged System – They don’t want to turn over Documents to Congress. What are they afraid of? Why so much redacting? Why such unequal “justice?” At some point I will have no choice but to use the powers granted to the Presidency and get involved!

Democrats have said that the House lawmakers are trying to discredit Rosenstein, and by extension, special counsel Robert Mueller’s investigation, which the deputy attorney general oversees.

“It is a panicked and dangerous attempt to undermine an ongoing criminal investigation in an effort to protect President Trump as the walls are closing in around him and his associates,” the statement continued.

Rosenstein, for his part, has yet to comment publicly on this impeachment move; but he has responded to previous attacks with defiance. “There have been people who have been making threats privately and publicly against me for quite some time,” Rosenstein said at an event in May. “I think they should understand by now the Department of Justice is not going to be extorted.”

Still, the Republicans’ resolution could force a showdown between the White House and Department of Justice, potentially giving Trump cover to fire Rosenstein or forcing him to resign — all of which could throw the future of the Mueller investigation into doubt.

Bill Gates and the 10 other tech titans with the power to shape how the US fights the coronavirus
The unexpected resonance of Zooropa, U2’s least-remembered album, 25 years later
Ball State University party shooting: what we know
The three charts that disprove Donald Trump’s convention speech
Ahead of a far-right rally in Portland, Trump tweets a warning to antifa
The 4 best movies you can now watch at home