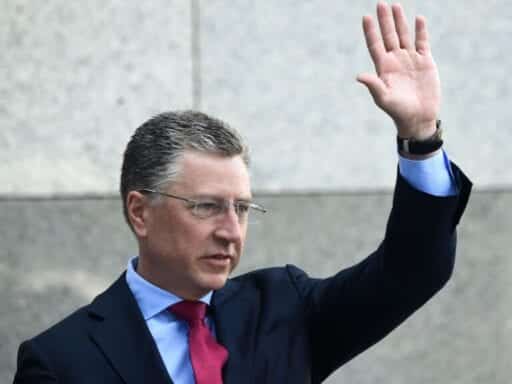 Share
Loading...
US Ambassador to NATO and US special envoy for Ukraine Kurt Volker waves as he arrives at a press conference in Kiyv on July 27, 2019, following his visit in Ukraine. | Sergei Supinsky/AFP/Getty Images

The former US special representative for Ukraine testified behind closed doors Thursday.

Kurt Volker — the former US special representative to Ukraine, who resigned last week amid the whistleblower scandal — became the first witness to testify in House Democrats’ impeachment inquiry of President Donald Trump on Thursday.

Volker’s testimony took place behind closed doors, so we don’t yet have a full transcript. But now, multiple media outlets have published his prepared opening remarks. Volker also provided text messages among State Department officials documenting the effort to get Ukraine to launch investigations that President Trump wanted, which House Democrats released Thursday.

In his opening remarks, Volker asserted that he did nothing wrong, insisting he wasn’t trying to bring about an investigation of the Bidens and that former Vice President Joe Biden was not a topic of discussion in his texts. He argued that the president’s focus on corruption was “understandable,” but “rooted in the past”:

“He said that Ukraine was a corrupt country, full of ‘terrible people.’ He said they ‘tried to take me down.’ In the course of that conversation, he referenced conversations with Mayor Giuliani. It was clear to me that despite the positive news and recommendations being conveyed by this official delegation about the new President, President Trump had a deeply rooted negative view on Ukraine rooted in the past. He was clearly receiving other information from other sources, including Mayor Giuliani, that was more negative, causing him to retain this negative view.”

But while it is true that the name “Biden” is never mentioned in the texts, there is repeated discussion of Trump wanting an investigation into “Burisma,” the Ukrainian gas company Hunter Biden sat on the board of. Volker also mentions elsewhere in the opening statement that Giuliani did in fact mention “accusations about Vice President Biden” to him.

You can read Volker’s full opening statement below, or at this link.

Will the coronavirus drive down housing prices? This real estate broker says no.
Poll: Biden would beat every other Democratic candidate in a one-on-one race
Are China and Iran meddling in US elections? It’s complicated.
Trump’s about to miss a court-ordered deadline to reunite young immigrant kids with their parents
Global protests reveal that white supremacy is a problem everywhere
Trump nominates Brett Kavanaugh to Supreme Court: full transcript