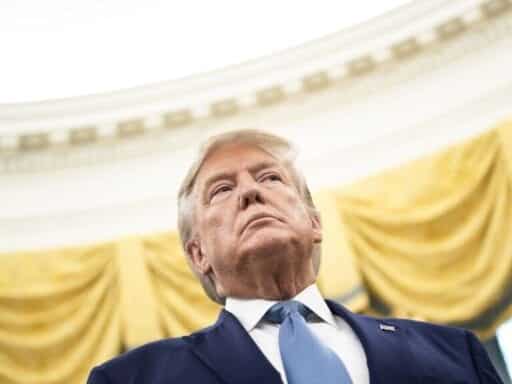 Share
Loading...
President Trump in the Oval Office at the White House, on October 8, 2019. | Brendan Smialowski/AFP via Getty Images

The Trump White House is refusing to participate in the House’s impeachment inquiry, the administration announced in a strongly worded letter to House Democrats Tuesday evening.

The letter, from White House counsel Pat Cipollone, reads more like a political document than a legal one.

It claims Democrats are violating President Donald Trump’s right to due process, as well as violating “the Constitution, the rule of law, and every past precedent,” with their inquiry, and suggests the inquiry is politically motivated and seeks to nullify the results of the 2016 election.

“Put simply, you seek to overturn the results of the 2016 election and deprive the American people of the President they have freely chosen,” Cipollone wrote. “Many Democrats now apparently view impeachment not only as a means to undo the democratic results of the last election, but as a strategy to influence the next election, which is barely more than a year away.”

The letter came the same day as House Democrats’ announcement they plan to subpoena US Ambassador to the European Union Gordon Sondland, after the Trump administration blocked Sondland from testifying in front of the House Intelligence Committee Tuesday morning.

It’s a continuation of the Trump administration stonewalling Democrats on their requests for documents and witnesses — which is only intensifying as they dig into the Ukraine scandal.

Read the White House’s full statement here or below:

The devaluing of black property has led to the devaluing of black lives
What is the essence of pamplemousse? LaCroix still won’t tell us.
Rosey Blair, the #PlaneBae matchmaker, apologizes for invading a woman’s privacy
Vaping: the astonishing surge in e-cigarette use
Why you’re unlikely to get the coronavirus from runners or cyclists
The Senate just passed a $2 trillion coronavirus stimulus package. Here’s what’s in it.