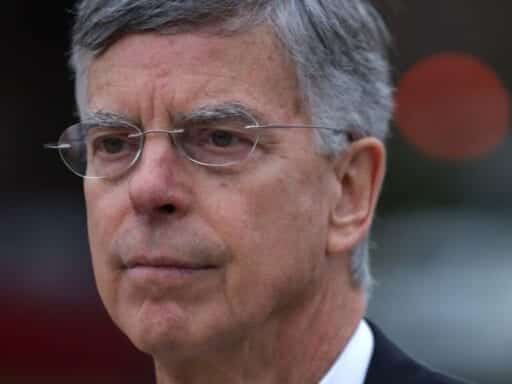 This is very bad for President Donald Trump.

William Taylor, the top US diplomat in Ukraine, used his opening statement in testimony for the congressional impeachment inquiry on Tuesday to say that there was, indeed, a quid pro quo. What’s more, President Donald Trump knew all about it and even ordered it.

The ambassador told three Democratic-led House committees that Trump made military aid to Ukraine contingent on the new Ukrainian government publicly announcing it would reopen an anti-corruption probe into Burisma, a Ukrainian gas company that Hunter Biden, Joe’s son, once sat on the board of.

Taylor said Trump also wanted Kyiv to investigate a long-debunked 2016 election conspiracy theory: that a Democratic National Committee server was whisked away to Ukraine to hide the fact that the country interfered in that vote, not Russia.

“Everything” — the much-needed military aid and even a meeting between the US and Ukrainian presidents — was dependent on Kyiv complying with Trump’s wishes, according to Taylor. “President Trump wanted President Zelensky ‘in a public box’ by making a public statement about ordering such investigations,” Taylor recalled a colleague telling him in a September phone call.

The career diplomat’s testimony is extremely devastating to Trump’s case that he did nothing wrong and that there was no quid pro quo. Now, more than ever, it’s clear there was one — which may only accelerate the timeline for Trump’s potential impeachment.

You can read Taylor’s entire opening testimony here or below:

Those who like government least govern worst
America fell in love with Steve Kornacki this week
Keith Ellison denies abuse allegations
The #MeToo movement and its evolution, explained
He signed up to DJ on a cruise ship. Then coronavirus struck.
SNL takes on pre-election anxiety in its Halloween cold open