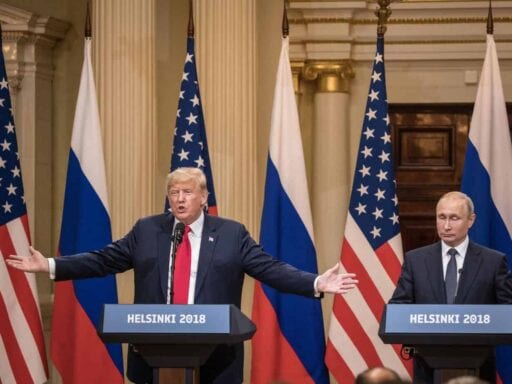 Some of the absolute worst moments from one of the Trump presidency’s lowlights.

President Donald Trump stood up next to Russian President Vladimir Putin on Monday in a press conference, and had not a single unkind word for Putin — a leader who has murdered journalists at home and poisoned dissidents abroad. But Trump did have a lot of unkind things to say about his own domestic political opposition — the Democratic Party.

Trump blamed the entire issue of Russian election interference on sore-loser Democrats, saying that it was an excuse for “why the Democrats lost an election which, frankly, they should have been able to win, because the electoral college is much more advantageous for Democrats.” He also bashed the Democratic party — and “the media” — for raising questions about Trump’s summit with Putin, saying that they were harming global peace and security for partisan gain:

As president, I cannot make decisions on foreign policy in a futile effort to appease partisan critics or the media or Democrats who want to do nothing but resist and obstruct. Constructive dialogue between the United States and Russia forward the opportunity to open new pathways toward peace and stability in our world. I would rather take a political risk in pursuit of peace than to risk peace in pursuit of politics.

Just last week, special counsel Robert Mueller indicted 12 Russian intelligence officers for hacking Hillary Clinton campaign officials, the Democratic National Committee, and the Democratic Congressional Campaign Committee.. There is indisputable evidence that Russia interfered in the 2016 US election in this and other ways. There are also a plethora of different things — invading Ukraine, slaughtering civilians and US-backed rebels in Syria, using chemical weapons on British soil — that might lead one to raise questions about treating Russia as a friend and potential ally.

But when Trump had an opportunity to highlight these issues publicly, standing right next to Putin on a joint stage, he chose not to do so in any serious way. His attacks on Democrats and the free press were far, far more pointed. This was a US president siding with a hostile dictator and calling his opposition unpatriotic for questioning that.

This would be stunning if it were any other president. But given Trump’s record on Russia and foreign policy more broadly, it’s not at all surprising — just profoundly disgraceful.

Senate Democrats broadly shut down Republican trolling on the Green New Deal
Pete Buttigieg drops out of the presidential race
The state of the 2020 Democratic primary
The Trump administration admits there’s no timeline for North Korea to give up its nukes
Everywhere basic income has been tried, in one map
In Dave Chappelle’s surprise new special, he drops the comedy to meditate on black America