Recessions are always racist. This one could be catastrophic. 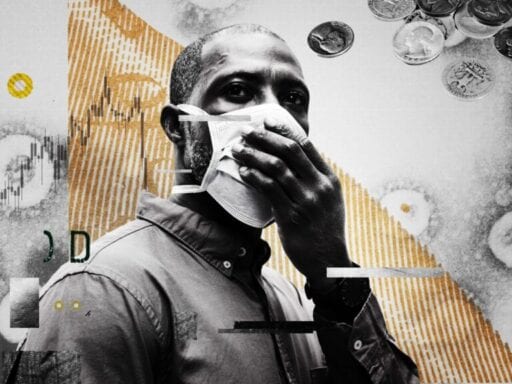 Recessions are always racist. This one could be catastrophic.

Though official numbers from the Department of Labor have yet to be released, CUNY labor economist Michelle Holder calculates that white unemployment hit 16 percent in April and black unemployment hit 20 percent. She considers those calculations conservative. The forecast, based on federal unemployment insurance claims, stands bolstered by other labor economists who’ve warned of spiking jobless rates with stark racial disparities in recent days. “We are in a depression-like time,” says Holder.

This depression will likely be uneven. Looking back over the past 30 years, you can’t find a recession that hasn’t been more severe for black workers than for whites. It’s just history. Moving forward, black laborers can expect higher unemployment as they are underrepresented in the white-collar jobs that are more easily done from home over Zoom or Slack. Perennially crushed by lending bias, battered by employment discrimination, and neglected by high interest rates, black Americans stand poised to be ravaged by the Covid-19 downturn.

The current crisis could devastate black Americans by hitting their earnings. Not only are black workers more likely to get laid off, but black-owned businesses are among the most likely to get hit by extended closures demanded by controlling the public health crisis. And with men of color suffering higher mortality rates due to Covid-19, some families may never see those earnings return.

The wealth gap compounds the calamity. For every dollar of wealth the median white family owns, the median black family owns a dime. This means they have less of a financial cushion to fall back on. Black Americans lost half their wealth in the Great Recession, which hit particularly hard because the crisis was rooted in housing. They never fully recovered from the last economic downturn. This one could be crushing.

One way to create wealth is through entrepreneurship. This crisis strikes black businesses the hardest.

The last economic crisis hit generational wealth by draining housing. This crisis hits yet another area that can be devastating to black Americans: black entrepreneurs.

Entrepreneurship functions as a way to genuinely create wealth. But black-owned businesses operate as the most precarious firms in the United States, according to an April report published by the Federal Reserve of New York. Most — 58 percent — are deemed “at risk” or “distressed.” These companies suffer from low profits, low credit scores, or weak earnings. Compounding matters, reporting from the New York Times and Mother Jones indicates that these fragile firms strain to access federal government loan assistance during the pandemic. “If you couldn’t get a loan from the bank before, you’re just screwed. And many of us are in that position,” a small black business owner told Mother Jones’s Kara Vought.

It’s hard to overstate how precarious these companies are. According to a recent analysis by Pew Research Center economist Rakesh Kochhar, black business owners only run 2 percent of firms that have paid employees. Black Americans make up 13 percent of the United States. Given the disparity, the survival of these firms remains crucial to the communities they serve. However Congress’s policy fix to support small businesses, the Paycheck Protection Program, relies on institutional banks with a history of discrimination to distribute financial assistance.

Previously, researchers from Utah State, Brigham Young, and Rutgers universities have shown that these banks tend to discriminate against minority entrepreneurs. Last year, a study by the National Community Reinvestment Coalition found “better-qualified black and Hispanic testers who shopped for small business loans at Los Angeles area bank branches were treated worse than less qualified white testers” and revealed “steep declines in government-backed lending to black business owners between 2008 and 2016.”

By relying on biased banks, the federal stimulus is replicating racial inequities in lending. The smaller, black-owned companies with their frail financial footing and weaker ties to bank regulators and policymakers sit at the front lines for what many economic analysts fear will be an extinction-level event for small businesses during the Covid-19 economic shutdown.

Black-owned businesses’ difficulties accessing the government funds echo inequities in previous bailout programs. In The Color of Money: Black Banks and the Racial Wealth Gap, University of California Irvine law professor Mehrsa Baradaran explains how financial institutions serving black neighborhoods like Chicago’s ShoreBank and Harlem’s Carver Bank received inadequate assistance during the 2008 recession and were forced to sell most of their assets to “a consortium of top Wall Street banks and investors.” This type of consolidation represents a loss for black neighborhoods, which seek to steer the destiny of their own development through local financial institutions. As Baradaran notes in her book, ShoreBank and Carver did not engage in racially predatory lending. Many of the banks that bought them up, like Wells Fargo and Bank of America, did.

Research on recessions suggests this pattern of replacing more equitable businesses with more exploitative ones is commonplace in segregated neighborhoods. NYU sociologist Jacob Faber finds that recessions open opportunities for high-fee businesses like check cashers to capitalize on hard economic times. In Cashing in on Distress: The Expansion of Fringe Financial Institutions During the Great Recession, Faber’s study of New York City found between 2006-2011 the number of check cashers dramatically increased in predominantly black, Latino, and mixed neighborhoods. And by 2011, nonwhite communities had approximately twice the number of check cashers as white neighborhoods.

“The fact that fringe financial services expanded in neighborhoods hardest hit by an economic downturn caused by another fringe financial instrument (i.e., subprime mortgages) has serious implications for our understanding of segregation,” Faber writes.

A recovery won’t necessarily feel like one for black Americans

Though we’re a long way from a true reopening of the economy, whenever that comes, history shows us that any recovery will likely come slower to black workers.

In 2017, Vox’s German Lopez published a story about a 30-year meta-study on the persistence of racism conducted by Northwestern University, Harvard, and the Institute for Social Research, which “found no evidence of changes over time in rates of hiring discrimination for black people.”

This latent bias tends to increase during recessions, says Holder. In her book African American Men and the Labor Market during the Great Recession, she explored the discrimination black men faced in the last downturn. “During the Great Recession there was an across-the-board decline of African American men’s representation at all occupational wage levels—high, mid, and low,” she wrote citing studies that explain discrimination “occurs during economic downturns that appear to be specific to slack labor markets in the USA.”

When mass unemployment arises, businesses can filter potential hires not just by qualifications but also by desired race. Buoyed by bias during the last recession, black men’s employment-to-population share dropped lower than that of all other major male demographic groups and lower than that of women overall. The cycle often works like this: Economic contractions lead to increased unemployment. Increased unemployment leads to hiring discretion, and hiring discretion leads to more discrimination.

Due to bias, employment segregation, and historical inequities, University of Rochester economist Narayana Kocherlakota estimates that recessions impact black people 1.9 times harder than they do the general public. He stresses that the Federal Reserve’s monetary policy can alleviate some of this disparity, however.

Citing the additional benefits of lower interest rates, Kocherlakota explained in Bloomberg that “the Fed’s choices can have a very different effect on black Americans than on the economy as a whole.” In line with this sentiment, economists Stephanie Seguino and James Heintz have criticized central banks for shifting “emphasis of monetary policy to an almost singular concern with controlling inflation over the goal of employment generation.” This policy recommendation of racially progressive monetary policy stretches back to the civil rights era.

“Another myth, quite popular these days, is that when unemployment drops below 4%, inflation becomes a problem,” activist Whitney Young wrote in 1969. “In effect, that means letting Black America pay for White America’s price stability. Better hungry black kids than less purchasing power for an already sated middle class!”

The Fed’s interest rates are only one tool amid many available for policymakers to improve the hardship black people experience during recessions. However, acting on these required a competent government actively seeking to mitigate the disparate impacts, something the Trump administration is yet to show an appetite for.

Regarding the health care side of this pandemic, the racially disparate trend is already revealing itself, where black people are experiencing less access to testing and higher rates of death. For black Americans, the economic trends of downturns — higher unemployment, higher business failure, more bank failure, less government assistance — means they will experience this downturn with acute pain. As eyes turn toward the economic fallout from Covid-19, similar gratuitous exposure to eviction, homelessness, poverty, and other the spoils declining economic prospects likely awaits black Americans as well.