Red-state Senate Democrats are redoubling their efforts to protect Obamacare 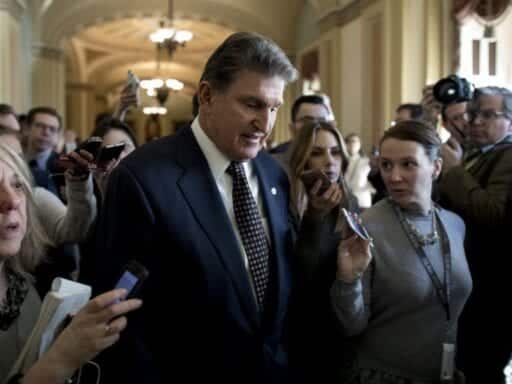 The issue is also the cornerstone of party leadership’s argument against Supreme Court nominee Brett Kavanaugh.

Red-state Democrats are signaling some solidarity with the rest of the caucus on at least one policy issue flaring in the fight over Brett Kavanaugh’s Supreme Court nomination. Lawmakers including Sens. Joe Manchin (WV), Joe Donnelly (IN), and Heidi Heitkamp (ND) — all Democrats representing states that Donald Trump won by a wide margin in 2016 — are among those backing a new Senate resolution aimed at defending the constitutionality of the Affordable Care Act.

It’s important to note that this resolution is not explicitly related to the Supreme Court nomination. In fact, Manchin stressed that he sees this measure as its own independent effort during a press conference last week. Its main focus does, however, have some hefty overlap with a key argument party leaders have been using to gin up opposition to Kavanaugh: Democrats argue that the ACA could face an existential threat from the Texas v. United States lawsuit if the conservative judge ascends to the bench.

This resolution seeks to stymie this exact threat, suggesting that health care is something Democrats can still agree on across the board. It also indicates that the issue could offer the common ground that party leadership is hoping for as the Supreme Court fight continues.

As part of the suit, several states are questioning the constitutionality of the ACA’s protections for those with preexisting conditions, and they’re doing so with the White House’s backing. Their challenge argues that the congressional repeal of the ACA’s individual mandate penalty rendered the mandate and other parts of the law unconstitutional. It would effectively decimate many aspects of the law if successful.

“If the Trump administration’s argument were to prevail, insurers could once again be able to flat-out deny Americans insurance based on their health status,” Vox’s Dylan Scott writes. “No amount of federal subsidies would protect them. Medicaid expansion would remain, but the private insurance market would no longer guarantee coverage to every American.”

This outcome is one that Democrats consider widely untenable. “We cannot go back to a time when insurance companies played God and allow them to decide who will be insured and who will not,” Manchin said in a statement. “This resolution will allow the Senate to play the role the DOJ has refused to take on — one of defending the existing law and West Virginians with pre-existing conditions.”

This isn’t about the Supreme Court nominee … yet

Because it is a nonbinding resolution and Republicans are unlikely to back it, this measure isn’t expected to have a significant impact. Instead, it’s an opportunity for Democrats to put yet another stake in the ground on health care — while attempting to call Republicans’ bluff.

Senate Majority Leader Mitch McConnell has previously said he supports protections for those with preexisting conditions, for example, and a resolution like this could force him to more clearly draw a line in the sand. He has yet to issue a statement on the resolution.

The full Democratic caucus, meanwhile, has thrown its support behind the measure. Whether that’s a portent for the Kavanaugh vote, though, is unclear. Manchin emphasized on Thursday that it shouldn’t be seen as an indication of his position on the nominee.

“It has nothing to do with anything except preexisting conditions for 800,000 West Virginians,” he said. “Not another thing that I’m thinking about except how do I get these people protected.”

Manchin is among the most closely watched lawmakers as the fight over Kavanaugh’s nomination continues to unfold, given his vote in favor of Neil Gorsuch in 2017. As Sen. Lindsey Graham (R-SC) has said, red-staters like him face what appears to be a “nightmare decision” as they weigh their Kavanaugh votes and are seemingly forced to decide between party allegiance and self-preservation. Manchin is also among the first Democrats to say that he’ll meet with Kavanaugh next week.

This measure ultimately enables red-state Democrats to reaffirm their commitment to the ACA. On the one hand, these senators’ very public opposition to Texas v. US could give them an easy out. Even if they vote in favor of Kavanaugh, they can point to other efforts, like this resolution, that indicate they fought on behalf of constituents’ health care.

On the other hand, this resolution could be a way for senators to hint how they plan to vote down the line. If red-staters think Kavanaugh could, indeed, endanger the ACA in the way that Democrats like Senate Minority Leader Chuck Schumer have suggested, a resolution like this suggests their minds could be all but made up.