Redditors love Infinity War’s Thanos so much, 300,000 of them just faked their own internet deaths 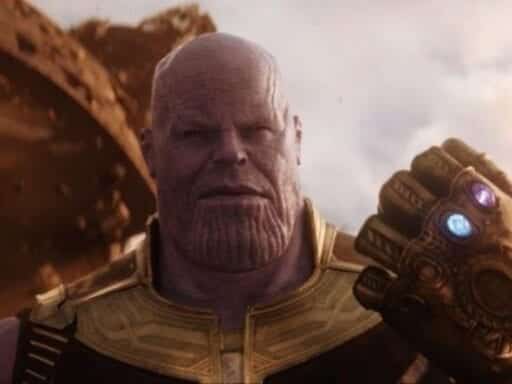 It’s the biggest mass ban in Reddit history — but unlike Thanos’s victims, they were all asking for it.

Warning! This entire article is a massive spoiler for the end of Avengers: Infinity War.

Thanos, the Marvel Infinity War villain whose controversial plot to bring “balance” to the world has fueled philosophical debates since the movie debuted at the end of April, can now claim credit for another mass purge.

After nearly a week of hype and anticipation, the subreddit r/ThanosDidNothingWrong on Monday began a mass purge of half its membership. Over 350,000 users were banned by random selection — an attempt to mimic Thanos’s “solution” to the overpopulation of the universe whereby, thanks to his capture of the Infinity Gauntlet, half of humanity was instantly erased.

This jarring ending to the film spawned a lot of meme-ing, especially from jokers who were, perhaps, overly sympathetic to Thanos’s plight. The phrase “Thanos did nothing wrong” was established even before the movie came out; on March 16, Reddit user Bundon5300 commented in the Marvel Studios subreddit: “Thanos really isn’t doing anything wrong. He’s just trying to bring balance to the universe. If that means that half of humanity has to go then half of humanity has to go.”

This prompted a user named whitebandit to create the new Thanos Did Nothing Wrong subreddit, in the vein of similar apologist subreddits. The most notable of these is the Star Wars subreddit r/EmpireDidNothingWrong, where at any given moment you might find Yoda jokingly being called a terrorist, a lot of humorous, worshipful love for Stormtroopers, and Empire propaganda. Predictably, r/ThanosDidNothingWrong has mainly focused on praising Thanos, meme-making, and debating the merits of wiping out half of all life in the universe. (Apparently Thanos killed half the world’s animals, too.)

As part of the merriment, a running theme quickly emerged that suggested it would be funny if at some point, half of the subreddit’s members were randomly banned — similar to the concept behind Did Thanos Kill Me, a meme website that randomly saves or sacrifices anyone who visits it for the good of humanity. And as the subreddit grew, so did the meme. On June 29, one of the moderators asked, “You seriously want us to ban half of the subreddit?”

Restore order to this meme haven to please Lord Thanos? It would be the biggest massban in reddit history and we’d probably get into some serious trouble, but for the good of Thanos, maybe we will.

Thus the great project was born. The moderators of r/ThanosDidNothingWrong had to get permission from Reddit admins to go through with the ban, and then they had to automate the process. As word of the upcoming ban spread, hundreds of thousands of Reddit users flocked to join r/ThanosDidNothingWrong just so they’d have a chance to get ousted. By the time ban day rolled around, over 700,000 users had subscribed — making the culling by far the largest “dusting,” or mass ban, in Reddit history.

When the process began late Sunday night, it was making headlines. Infinity War directors the Russo brothers even took part in the exercise, with Anthony Russo joining in the sub’s preliminary festivities. The ban process was also live-streamed on Reddit’s official Twitch account — and none other than Thanos himself, an inexplicably shirtless Josh Brolin, was on hand to snap the ban into existence.

Redditors who were banned were asked to unsubscribe from the r/ThanosDidNothingWrong subreddit and proceed to r/inthesoulstone, a reference to the infinity stone, where presumably all the souls lost in Infinity War’s great purge will be trapped until the next Avengers movie continues the story and presumably restores some or all of them. Not all of those banned have complied, however, and while the dusting of half the subreddit’s membership has been successfully completed, just under 600,000 users still remain subscribed to it.

If this all smacks of pointless nihilism, that’s kind of the point. One Reddit user noted that the purge of r/ThanosDidNothingWrong was basically a giant mass cybersuicide — though it’s important to note that the ban doesn’t apply to the rest of Reddit, no one is losing their account, and it’s purely and simply an excuse to get excited over very little. Much like thousands of Cards Against Humanity fans coming together to pay for the company to dig a giant hole in the ground, it’s much ado about nothing.

It’s all good news for Marvel, though — speculation has already begun that the burly, CGI-generated Thanos could be the next generation’s Joker. And plans for an Infinity War extended edition are being billed as containing an extra half-hour of footage — not of any of the Marvel Cinematic Universe’s many, many heroes, but of its latest villain and his backstory.