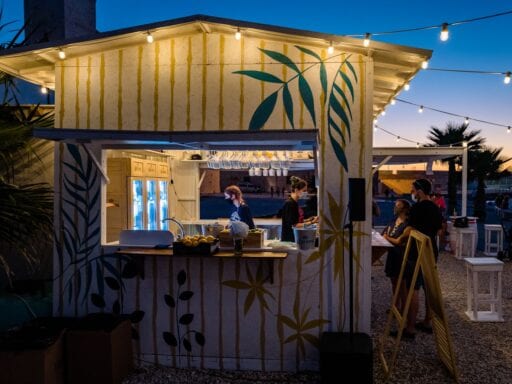 It’s right for the economy and for public health.

Adam Ozimek is a first-rate labor market economist, but also the part-owner of an excellent bar/restaurant/video arcade/bowling alley in Lancaster, Pennsylvania, called Decades — which, like so many bars and restaurants, has been hit hard by the coronavirus and economic crisis.

He reported on September 17 that while “revenues have moved up a little” from their Covid low point, they’re still at less than one-third of normal levels “despite takeout and a new big outdoor space.”

One problem is that to comply with state safety mandates, only half the lanes can be open at a given time. Another is that the big corporate event business has vanished, which is a big part of their normal mix. Decades’ owners were worried about the pandemic as far back as January, so they plowed all their 2019 profits into reducing debt. That, plus some help earlier in the year from the Paycheck Protection Program, has kept them afloat so far. But unless revenue picks up a lot and soon, they’re going to be in big trouble.

And they’re not alone. Seven bar/restaurant ventures in my DC neighborhood owned by the Hilton brothers, longtime anchors of the local nightlife scene, are shutting down indefinitely. The neighborhood falafel place, which used to rely on a steady stream of late-night drunk customers for revenue, has also shut down. Several scheduled restaurant openings don’t seem to be happening or are delayed.

According to Yelp, nationwide, 60 percent of Covid-related business closures are now permanent. And the impact is felt throughout the industry — from big cities like DC to smaller ones like Lancaster, from independent eateries to big publicly traded companies like the one that owns IHOP and Applebee’s or the one that owns Chili’s and Olive Garden.

Simply put, “reopening the economy” is not good enough to save America’s service industry.

But keeping them open is a huge risk to public health. As Anthony Fauci told Chris Hayes on September 17, “Bars are a really important place of spreading of infection. There’s no doubt about that.” Bar and restaurant transmission was a big factor in America’s uptick in Covid-19 cases this past summer, and it seems to be driving the increase in cases happening in Europe right now. As the weather gets colder and outdoor dining becomes infeasible across large swaths of America, the problems are only going to ratchet up — enough customers will behave cautiously to doom restaurants to failure, but just enough may behave irresponsibly to spread the virus.

The federal government needs to be much freer with bailout money, and in exchange demand more restrictions on how bars and restaurants can operate. Right now bailout-phobia is damaging the economy and public health at the same time — with no real upside other than making the labor market statistics look superficially better.

A prolonged pandemic will give us a smaller, worse restaurant sector

But it also has fixed costs. If you borrowed money to launch your restaurant or buy your building, you need to pay interest on those loans. And if you rent your space, as is more common, you need to pay your landlord. Because these rents were set in the past in a competitive marketplace that was based on the assumption that restaurants would be packed at peak hours, it just doesn’t work to shrink the businesses. You make more revenue open than closed, and more with looser restrictions than with stringent ones. But fundamentally, as long as members of more vulnerable population subgroups are staying home and as least some young and healthy people are being more crowd-averse than usual, restaurants will have a big problem.

Indeed, to the extent that restaurants are still in business, it’s largely because tenants haven’t been paying their rent in full or because landlords have bargained for rent discounts. After all, there’s not much point in evicting a restaurant when there’s minimal demand for new restaurant leases.

Yet landlords have their own bills to pay, typically in the form of mortgages, and there are delivery-centric pizza chains and other businesses looking to expand. And eventually, if enough restaurants fail, the remaining ones will be able to survive by raising prices.

That emerging world of higher unemployment, higher prices, and reduced choice isn’t the one anyone wants. But all current American policymakers are doing to support the sector is encouraging risky public health behaviors.

You can’t eat food with a mask on

Early in the pandemic, public health authorities actively discouraged the use of masks by the public and messaged heavily in favor of hand-washing and cleaning surfaces. We have subsequently learned the good news that surface transmission seems rare in practice. As Emanuel Goldman writes in the August issue of The Lancet, messaging that suggests high risk of surface transmission “has been assumed on the basis of studies that have little resemblance to real-life scenarios.” In practice, the risks, though not nonexistent, are relatively low: Surface transmission “isn’t thought to be the main way the virus spreads,” according to current Centers for Disease Control and Prevention (CDC) guidance.

Hygiene theater is appealing in part because it’s theatrical — you can see someone doing the scrubbing. But it’s also appealing because it can, in principle, be done everywhere. The fact that it’s not really necessary in most cases is probably good news, but it has helped bolster a false sense of security about how transmission actually happens.

The prior thinking on person-to-person transmission was that we only had to worry about relatively large droplets that fell rapidly to the ground, hence the emphasis on 6 feet of distance. Those droplets are an issue, but doctors and scientists are increasingly worried about smaller particles that travel farther. There’s a lot of dispute about exactly how to characterize this (see my Vox colleague Brian Resnick’s explainer for details), but the bottom line is, as Zeynep Tufekci writes, “we should focus as much on ventilation as we do on distancing, masks, and hand-washing, which every expert agrees are important.”

That brings us back to bars and restaurants. If you’re eating outside, you’re in a well-ventilated space. And according to public health guidance, as long as surfaces are reasonably clean and you’re not too close to anyone outside your household, you should be fairly safe.

But if you’re indoors unmasked, eating and chatting, no amount of disinfecting wipes is going to make things totally safe unless the restaurant happens to have high-grade ventilation. And while developing clear standards around ventilation, doing tests, and paying for upgrades is one possible solution, those efforts need to be focused on critical facilities like nursing homes and health care providers, not nice-to-haves like restaurants.

The whole “airborne” debate can get very complicated and technical, but the basic issue is simple: Indoor dining is very unsafe. And the outdoor dining that’s been used as a substitute is running out of steam as weather gets cooler across much of the country. For health reasons, we need fewer customers at these businesses. For economic reasons, we need them to survive. The fix is a huge bailout.

Cheap loans could save ailing businesses

Ozimek, the restaurateur/economist, developed a very sensible proposal months ago with John Lettieri of the Economic Innovation Group:

Companies could use the loan to replace old debt with cheaper new debt, cover rent, have cash available to invest in picnic tables or umbrellas, for example, to facilitate outside dining, and then keep selling food with revenue covering variable costs. This wouldn’t save every restaurant or every restaurant job, but it would save a lot of them and make it more economically tolerable to save a lot of lives.

To get the cash, restaurants should have to close their dining rooms to customers and subsist on delivery, takeout, and outdoor dining unless community prevalence of Covid-19 is at some designated low level. There could also be a provision for establishing ventilation and air purification protocols that are considered sufficient, with of course loan money available for doing upgrades.

Shutting down more stuff would be a huge bummer, and obviously nobody in politics really wants to do it. But America’s restaurant sector isn’t going to survive the winter in healthy conditions no matter what restrictions we place on it. The industry needs a bailout, and fast. Once we reconcile ourselves to that reality, then doing the right thing for public health becomes a no-brainer. Every week of delay costs lives while doing little to actually save businesses.