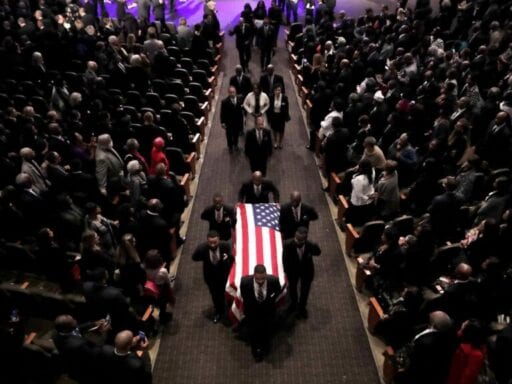 Rep. Elijah Cummings’s funeral Friday, marked by speeches from Barack Obama, the Clintons, and Cummings’s family, was as much a heartfelt celebration of a man who dedicated his life to public service as it was an indictment of President Donald Trump’s character in office.

In his last months, Cummings, who chaired the powerful House Committee on Oversight and Reform — one of the committees carrying out the impeachment inquiry into Trump —became the subject of Trump’s ire. Trump called Cummings a “brutal bully” in July and derided the Congress member’s Baltimore district as the “worst in the USA,” a “rat and rodent infested mess,” and a “dangerous & filthy place.” That incident was well-remembered Friday.

“He had to go on to actually work to fight for the soul of our democracy against very real corruption,” Maya Rockeymoore Cummings, the Maryland Democrat’s widow, said at New Psalmist Baptist Church. “I want you all to know that it was not easy. What Chairman Cummings did was not easy. And it got infinitely more difficult in the last month of his life, when he sustained personal attacks and attacks on his beloved city.”

Obama, too, drew distinct contrasts between Cummings’s character and Trump’s.

“You are not a sucker to have integrity and to treat others with respect,” Obama said.

Cummings died at 68 last week after a more than two-decade tenure in Congress as a civil rights advocate, leader on the opioids epidemic and chair of the oversight committee. His body lay in state in the US Capitol Thursday for public viewing, the first African American lawmaker given that honor. At his funeral, House Speaker Nancy Pelosi, Bill and Hillary Clinton, Obama, and former NAACP leader Kweisi Mfume delivered remarks. Also in the audience were some of Cummings’s Republican colleagues, including some of Trump’s most ardent defenders, like Reps. Mark Meadows (R-NC) and Jim Jordan (R-OH), who have called Cummings a friend.

Cummings’s death comes as the oversight committee ramps up its impeachment inquiry into Trump. The committee has been engaged in a months-long investigation into the Trump administration that escalated in September, amid reports that the Trump administration withheld military aid to Ukrainian to pressure the foreign leaders to investigate Democratic presidential candidate Joe Biden and his son.

Eulogies by everyone from Obama to Rockeymoore Cummings gave a nod to the Congress member’s advocacy for Baltimore and his work on the Oversight Committee. Below are four excerpts from these remarks.

“I was thinking I would want my daughters to know how much I love them, but I would also want them to know that being a strong man includes being kind,” he said, a seeming dig at Trump, whose presidency has centered on displaying strength through xenophobic policies as well as attacks on other lawmakers. “You are not a sucker to have integrity and to treat others with respect,” Obama said.

Although the former president never explicitly invoked Trump’s name, he also praised Cummings’s integrity, while contrasting it with that of other elected officials:

We are supposed to introduce them as honorable.

But Elijah Cummings was honorable before he was elected to office. There’s a difference. There is a difference if you were honorable and treated others honorably. Outside the limelight. On the side of a road. In a quiet moment, counseling somebody you work with. Letting your daughters know you love them.

Former Secretary of State Hillary Clinton called out Cummings’s focus on preserving democracy for future generations and compared him to an “Old Testament prophet” with the same namesake. Both men could call down “fire from heaven,” she said. Similarly, she argued, both sought to combat abuses of power.

“Like that Old Testament prophet, he stood against corrupt leadership of King Ahab and Queen Jezebel. And he looked out for the vulnerable among us,” she said in her remarks, urging people to consider Cummings’s leadership as they weighed their own actions.

She also quoted a previous statement he’d made: “‘When we are dancing with the angels, the questions will be asked,’ he said, ‘In 2019, what did we do to make sure we kept our democracy intact?””

It is no coincidence, is it, that Elijah Cummings shared a name with an old testament prophet, whose name meant in Hebrew, “the Lord is my God.” And who used the power and wisdom God gave him to uphold the moral law that all people are subject to come and because of all people — subject to, and because of all people are equal. Like the prophet, our Elijah could call down fire from heaven. But he also prayed and worked for healing. He weathered storms and earthquakes but never lost his faith.

Like that Old Testament prophet, he stood against corrupt leadership of King Ahab and Queen Jezebel. And he looked out for the vulnerable among us. He lifted up the next generation of leaders. He even worked a few miracles.

He said, I am begging the American people to pay attention to what is going on because if you want to have a democracy intact for your children and your children’s children, in generations yet unborn, we have got to guard this moment. This is our watch. Our Elijah knew because he was a man of faith and a man of the church that life was fleeting and precious. … “When we are dancing with the angels, the questions will be asked,” he said in 2019, “What did we do to make sure we kept our democracy intact?”

Cummings’s widow, Maya, who is the Maryland Democratic Party chair, was perhaps the most direct in her message: In his last months, Cummings was under attack. Trump was bullying him, and congressional Republicans were trying to tear down the integrity of his congressional inquiry into the presidency.

Her first mention of the difficult times were directed at Obama.

“President Obama, he was so proud. He was so proud. To stand with you and for you early, to be your co-chair here in the state of Maryland, to serve as your chief defense attorney on the House Oversight Committee, and to make sure that you and your administration were all right,” Rockeymoore Cummings said. “But you did not have any challenges like we got going on now.”

She said Cummings’s “job became harder over time. … Now, he had to go on to actually work to fight for the soul of our democracy against very real corruption.”

I want you all to know that it was not easy, but congressman — what Chairman Cummings did was not easy. And it got infinitely more difficult in the last month of his life, when he sustained personal attacks and attacks on his beloved city. And while he carried himself with grace and dignity in all public forums, it hurt him, because one thing you do not know about congressman Cummings — he was a man of soul and spirit.

He felt very deeply. He was very empathetic. It was one of his greatest gifts. And it was one of the sources of his ability to be a public servant and a man of the people. So with that, to have the week’s activities basically be laid out in such a glorious way, to be a tribute to the great man that he was, to the great legacy that he left — to be the first African-American congressman to ever lie in state in the US Capitol.

Now, it is true that he dictated every aspect of his service today, and he would have told me, my, I don’t want a service at the US Capitol, but I felt very strongly that they were trying to tear him down, and we needed to make sure that he went out with the respect and the dignity that he deserved. [Applause] Maya: This was a man of the utmost integrity! Do you hear me? He had integrity! And he cared about our democracy! He cared about our planet!

Pelosi reiterated a statement that she closely associated with Cummings in an apparent reference to the current political moment: “We are better than this.”

A fellow lawmaker with close ties to Baltimore, the speaker spoke about Cummings’s ardent commitment to representing the city and his openness to mentoring younger lawmakers and staffers. Pelosi also emphasized that Cummings aimed to conduct his work in a bipartisan fashion, by building consensus on polarizing topics.

During their decades serving together in the House, Cummings was a “North Star,” Pelosi said:

Elijah was a proud man. Proud of his heritage, proud of Baltimore. And proud of America. He always appealed to our better angels and to the promise of America, calling us to live up to our principles and for a higher purpose. All the words that we will use that are the best words, are words that Elijah used. When we were not meeting the needs of children in our country, he said, “we are better than this.” He held himself to a high standard, and that is why I have called him the North Star of Congress, our guiding light.

While the House forges ahead with its impeachment inquiry, Cummings’s leadership of the oversight committee is certain to leave an indelible mark. As Obama recalled in his speech, there’s a statement Cummings would repeat often when faced with challenges: “The cost of doing nothing isn’t nothing.”