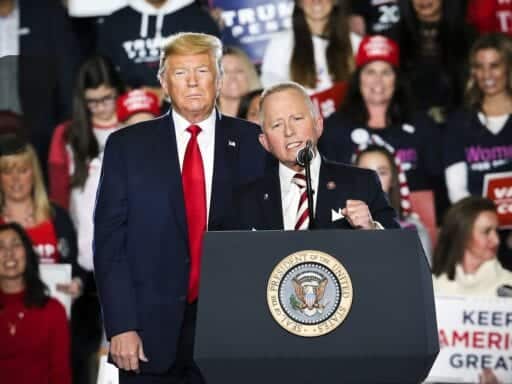 Rep. Jeff Van Drew (NJ-2), who was elected to the House of Representatives as a Democrat before switching parties and declaring his “undying support” for President Donald Trump, has won reelection.

The now-Republican first-term Congress member defeated his Democratic challenger, Amy Kennedy (yes, she’s one of those Kennedys), according to a call by Decision Desk.

Van Drew, a dentist, spent decades in local politics and then New Jersey’s state Senate as a Democrat. And when he decided to run for the open Second District congressional seat being vacated by its longtime representative, a retiring Republican, in 2018, national Democrats were thrilled.

Party leaders viewed Van Drew as a strong recruit, in part because he had a pro-business record and sometimes sided with Republicans on cultural issues. Progressives were less thrilled with his candidacy for this same reason, but Trump won this South Jersey district by 4.6 percentage points in 2016, so Democratic leaders thought a moderate nominee was needed.

In the 2018 midterms, Van Drew did end up winning fairly easily, and his victory helped Democrats regain the majority in the House of Representatives for the first time in eight years.

And then the trouble started.

Van Drew disdained some of the priorities of the Democrats’ progressive wing, including Medicare-for-all and the Green New Deal, but he was hardly alone in that (House Speaker Nancy Pelosi, for instance, opposes both). He also was a staunch opponent of the liberal effort to impeach Trump based on special counsel Robert Mueller’s findings — but there, also, Pelosi and many other moderate Democrats were similarly reluctant for much of 2019.

Yet the politics of impeachment shifted after a whistleblower’s revelation that Trump had pressured Ukrainian President Volodymyr Zelensky to announce an investigation of the Bidens. In September, Pelosi announced that she supported an impeachment inquiry, and most other moderate Democrats went with her.

Van Drew was an unusual exception. He was one of just two House Democrats to vote no on a resolution setting rules for the impeachment inquiry. And by December, when the House was about to hold its final vote on impeachment, word leaked out that Van Drew was planning to switch parties.

He made the switch shortly after voting no on the impeachment articles. “This is just a better fit for me,” Van Drew said, while sitting next to Trump in the Oval Office. “It’s who I am. It’s who I always was, but there was more tolerance of moderate Democrats, of Blue Dog Democrats, of conservative Democrats. And I think that’s going away.”

“You have my undying support,” he continued, addressing Trump, adding, “always.”

.@CongressmanJVD to President Trump: “You have my undying support.” pic.twitter.com/UR4fo9BGOM

Amy Kennedy beat back the South Jersey Democratic machine’s preferred candidate to win a surprisingly large victory in the primary. She then raised millions to take on Van Drew in the general election, and soon passed him in polls.

But Van Drew believed that, in backing Trump, he was more in touch with what the voters of his district wanted. And though Trump has lost reelection, Van Drew has survived.