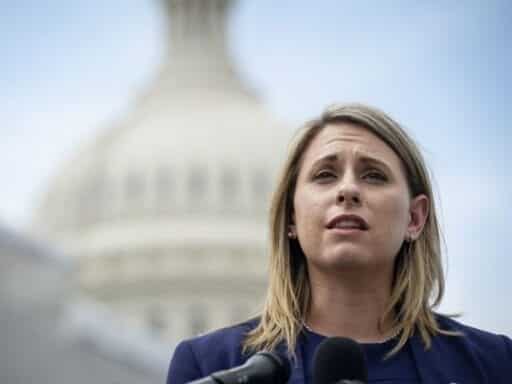 The allegations were accompanied by the publication of nude photos; Hill has taken legal action against outlets that shared the images.

In the wake of allegations she engaged in improper sexual relationships, California Democratic Rep. Katie Hill announced her resignation from Congress Sunday.

“During the final tumultuous year of my abusive marriage, I became involved in a relationship with someone on my campaign,” she said in a statement. “I know that even a consensual relationship with a subordinate is inappropriate, but I still allowed it to happen despite my better judgement.”

Despite this statement, the House Ethics Committee planned to investigate the allegations Hill had a relationship with Kelly. Hill said she was “fully and proactively cooperating with the Ethics Committee.”

In her resignation statement, first reported on by Politico, Hill said her decision to leave office was driven in part by the publication of intimate photos of her — some of these images were published in the initial RedState story about the alleged relationships; others were published by the British tabloid the Daily Mail.

In her resignation statement, Hill said she needed to leave office “so that the good people who supported me will no longer be subjected to the pain inflicted by my abusive husband and the brutality of hateful political operatives who seem to happily provide a platform to a monster who is driving a smear campaign built on cyber exploitation.”

As Hill faced the allegations, many impugned the framing of the stories alleging misconduct on Hill’s part. As Vox’s Anna North explains:

The fact that Hill is one of the first openly bisexual members of Congress may be contributing to the way the allegations have been portrayed. RedState’s headlines, for example, appeared to stoke salacious interest in the story by referring to Hill’s alleged “2-Yr Throuple Relationship.”

GOP Rep. Matt Gaetz called the House’s investigation into the allegations “absurd,” writing on Twitter, “Who among us would look perfect if every ex leaked every photo/text? Katie isn’t being investigated by Ethics or maligned because she hurt anyone — it is because she is different.”

On Sunday, House Speaker Nancy Pelosi thanked Hill for her service, saying that the lawmaker had “made a great contribution as a leader of the freshman class,” but added, “she has acknowledged errors in judgement that made her continued service as a member untenable.”

Hill did not specify when she plans to leave the House, but Politico reports her final day on Capitol Hill could be as early as November 1. She won a competitive district in 2018 that had been held by a Republican — like all vacant House seats, her chair will need to be filled with a special election.

Hill’s resignation is the latest of several Congress members facing allegations of sexual misconduct. Other lawmakers, from Sen. Al Franken to Rep. John Conyers (who recently died) have left Congress under similar circumstances.

Hill’s case is different, however, for a number of reasons, as North has explained. All of those who have resigned in the wake of the #MeToo movement have been men. Hill, on the other hand, was a prominent member of a historic class of lawmakers that included a record number of women, and she was “one of the ‘Big Six’ first-term members of Congress to serve in major leadership roles.”

The allegations she faced were also colored by lurid details about her private life, as North notes, with conservative media — and some of the public — focusing on her bisexuality and nude photos:

Other conservative outlets are leaning hard on the “throuple” angle, with the Washington Examiner titling a story “Swing district: Katie Hill 2020 rivals seize on leaked naked ‘throuple’ photo as campaign issue,” and Fox News reporting, “Rep. Katie Hill fights back amid claims she was involved in romantic ‘throuple’ with staffer.”

Among ordinary internet users, “throuple” was the top Google search term linked to Hill’s name this week, with “photos” and “uncensored” close behind, indicating that people are searching for the story in the hope of seeing Hill naked. This is, to put it mildly, not how the allegations against Sen. Franken were received.

Hill has admitted to entering into a relationship with a distorted power dynamic with a campaign aide. That, as Hill has said, was inappropriate. But the coverage of that relationship, as well as the release of personal images, was not appropriate either.

As North writes, the entire situation is a sobering reminder “that men aren’t the only ones who can engage in sexual misconduct and that coverage of the issue is just as vulnerable to sexism, homophobia, and biphobia as any other topic.”

A new poll shows a startling partisan divide on the dangers of coronavirus
The Vox Senate interview: Doug Jones on how Democrats can win in the South
Trump’s Republican Party, explained in one photo
4 health care questions, besides Medicare-for-all, every 2020 Democratic candidate should answer
Michigan Democratic Sen. Gary Peters staves off a strong challenger to keep his Senate seat
What to fear in Trump’s White House