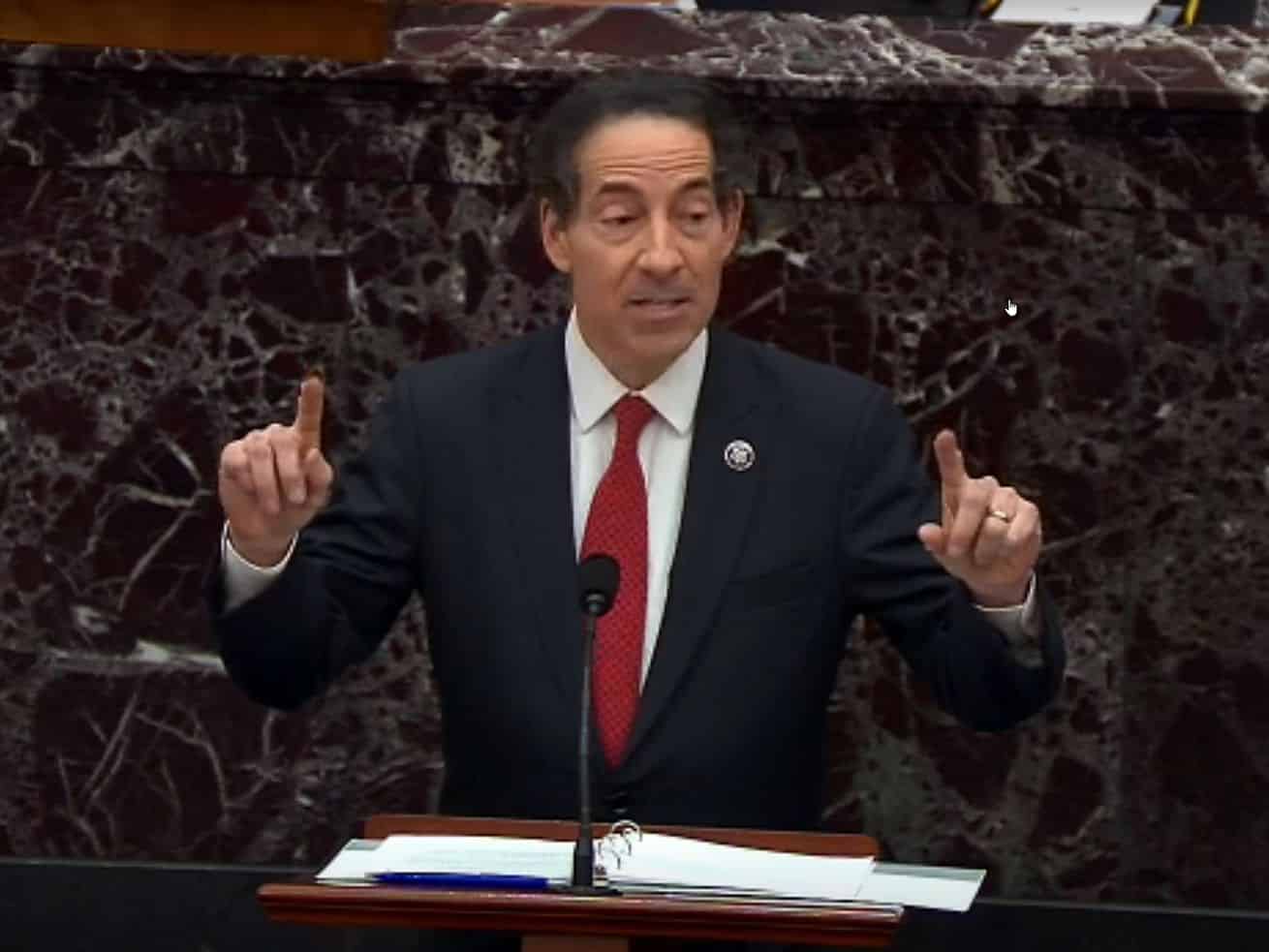 The House impeachment managers have not yet indicated if they will ask the Senate to vote on calling witnesses in Donald Trump’s second impeachment trial. But Rep. Jaime Raskin, as part of the House’s opening statements Tuesday, made a striking point: The lawmakers themselves are witnesses.

Raskin, Democrats’ lead impeachment manager and a former constitutional law professor, previewed the House’s arguments for the constitutionality of the trial Tuesday, and other managers did the same for the former president’s conviction on a single charge of incitement of insurrection. But those arguments were bookended with evocative appeals. Raskin started Tuesday’s debate period with a video displaying the events of Jan. 6 through the point of view of Trump, the rioters, and members of Congress. He closed their opening remarks by sharing his experience of the insurrection, describing the chaos and fear running through the House.

“This trial is personal indeed for every senator, and for every member of the House, for every manager, and all our staff, and the Capitol Police, and the Washington, DC Metropolitan Police, and the National Guard, and maintenance and custodial crews, and the print journalists and TV people who were here, and all of our families and friends,” Raskin said. “I hope this trial reminds America how personal democracy is and how personal is the loss of democracy too.”

January 6 was already an emotional day for the Maryland Congress member. He described the pain his family was already experiencing after the recent death of his son Tommy, whom they had buried the day before. Raskin said he brought his daughter Tabitha and his son-in-law Hank in order to stay close during a difficult time and allow them to see what he assumed what would be the peaceful transfer of power when the House certified the 2020 election results.

As he began to get choked up, Raskin described assuring his family that the Capitol would be safe and starting the day with a sense of “being lifted up from the agony” after both Democrats and Republicans stopped in to his office to offer condolences.

In emotional recounting, Rep. Jamie Raskin says members of his family hid under a desk during the Capitol siege, “placing what they thought were their final texts and whispered phone calls to say their goodbyes. They thought they were going to die.” https://t.co/Lau7kmD368 pic.twitter.com/oVkxJmttgm

His description of what ensued was, in effect, witness testimony.

“By the time we learned about it about what was going on, it was too late and I couldn’t get out there to be with (my family) in the office,” Raskin said. “All around me, people were calling their wives and their husbands, their loved ones to say goodbye. Members of Congress — of the House anyway — were removing their congressional pins so they wouldn’t be identified by the mob as they tried to escape the violence.”

“Our new chaplain got up and said a prayer for us, and we were told to put our gas masks on,” Raskin continued. “Then there was a sound I will never forget — the sound of pounding on the door like a battering ram is the most haunting sound I ever heard and will never forget. My chief of staff was with Tabitha and Hank, locked and barricaded in that office, with the kids hiding under the desk and placing what they thought were their final texts and whispered phone calls to say their goodbyes. They thought they were going to die.”

The Congress member went on to say it was heartbreaking to hear his daughter say, after they were reunited, that she never wanted to return to the Capitol.

“Senators, this cannot be our future,” Raskin said, his voice cracking. “This cannot be the future of America. We cannot have presidents inciting and mobilizing mob violence against our government and our institutions because they refuse to accept the will of the people under the constitution of the United States.”

From @kasie sitting in Senate chamber – When @RepRaskin spoke about his daughter not wanting to come back to the Capitol, there was utter silence in the Senate Chamber. Complete dead silence.

Raskin’s personal story absolutely wrecks, and it was clearly a very emotional personal testimony he just gave. After the Senate went into break, I saw about a dozen Dem Senators + Tom Cotton (R) go up to him and appear to offer him condolences.

And yet, for all of his efforts, the argument is likely moot — 45 Republicans have already signaled they believe the impeachment is unconstitutional. Many have signaled nothing they see this week will change their mind that they should not convict the former president.

Sen. Roger Wicker just told me that “Democrats sent a better team” this time than 2020, calling them “very eloquent.” But he told me “no” nothing changed his mind on the constitutionality question. He thinks it’s not constitutional to try a former president.

But Raskin’s emotional appeal speaks to the broader purpose of the trial — historical record and potential electoral accountability, as Vox’s Zack Beauchamp writes:

In failing, the Senate trial will serve a necessary function. It will show that, even in the dramatic case of outright insurrection against the US government, the country’s political system is incapable of holding elites accountable largely due to one party’s extreme partisanship. Demonstrating this will serve as a justification for people, Democrats and civil society alike, to take more dramatic steps to repair American democracy down the line — including pushing for significant reforms of the political system.

How the pandemic is bringing Elon Musk’s dream to connect everyone on Earth closer to reality
Vox Sentences: Will Texans bet on Beto?
Once upon a time, there was cottagecore
Can habit-tracking apps help bring some routine back to our quarantine lives?
50 million world Covid-19 cases: The biggest outbreaks, explained
Former Times book critic Michiko Kakutani recommends books for the Trump era