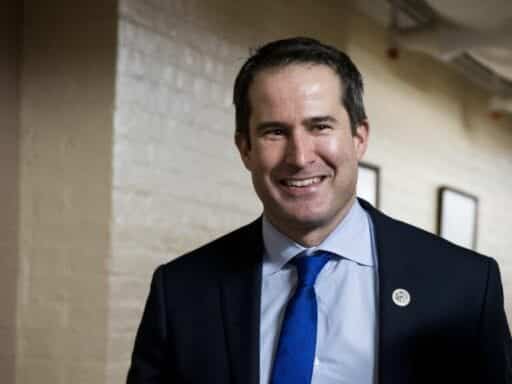 Moulton plans to prioritize national security and veterans issues in his 2020 bid.

Seth Moulton dropped out of the 2020 presidential race on August 23. Here’s the rest of the Democratic field.

Rep. Seth Moulton (D-MA) joined the massive Democratic primary field for president in April, billing himself as a young outsider with fresh ideas and military experience.

“Ask anyone who’s lost their job to a changing economy or a child to opioids or has to choose between heat and food in the winter, they’re feeling forgotten,” Moulton said. “We need to restore our moral authority in everything we do. Whether it’s appointing a Cabinet member, negotiating a treaty or signing an executive order, I will always uphold America’s values.”

He entered a large primary field as an outsider candidate, and has struggled to break through, becoming one of three candidates who failed to make the cut for the first DNC debate. The 40-year-old Moulton is leaning heavily on his youth and military service, calling for a new generation of leadership in the White House. It’s a similar to the message he pushed when he and others tried to recruit someone to challenge Pelosi’s speakership earlier this year.

Part of the reason Moulton and his fellow Pelosi detractors tried to unseat the longtime House leader going into 2019 was a general complaint that party power was too entrenched at the top — and that younger members of the House were squandering their talents while waiting decades to ascend to a committee chair position, never mind House leadership.

“This election was a call for change,” Moulton told reporters at a Massachusetts town hall after the 2018 midterms, as he openly called for Pelosi to be replaced. “I think if our party answers that call, that call for change with the amazing victories we had across this country, by just saying we’re going to reinstall the same status quo leadership we’ve had since 2006, for over 10 years, I don’t think we’re answering the call of the American people.”

Moulton is one of a host of lesser-known members of Congress pursuing 2020 bids, including Reps. Tim Ryan (D-OH), Eric Swalwell (D-CA), and John Delaney (D-MD). It’s telling that both Moulton and Ryan, the Congress member from Ohio who challenged Pelosi for House minority leader in 2016, are now pursuing much larger political ambitions.

Moulton will now pitch fresh leadership in the White House. The only problem is the 24 other Democratic candidates running.

Moulton is running on his national security experience, to appealing to America’s veterans. His platform is also focused on jobs and the economy, fixing the nation’s infrastructure, and implementing a public option to improve access to health care.

An Iraq War veteran, Moulton has made veterans issues one of his top priorities while in the House. He also campaigned for a number of veterans running for the House in 2018. He’s close to former high-up military brass including retired Gen. Stanley McChrystal, who endorsed him in his 2014 congressional race, and retired Gen. David Petraeus, whom he worked for directly during his tour in Iraq.

Even though Moulton spent much of his time in the House lambasting Pelosi (he has become more complimentary since her handling of the government shutdown), one of his policy priorities in a 2020 election is nearly identical to one Pelosi and House Democrats put forward as their first bill of the year: a sweeping pro-democracy reform bill to expand voting access for Americans.

That bill, known as the For the People Act, or HR 1, was recently passed overwhelmingly by House Democrats but is being blocked in the US Senate, where Majority Leader Mitch McConnell has refused to bring it up.

“From gerrymandering and the Electoral College to voter suppression, especially in communities of color, many Americans don’t believe their votes count,” Moulton told CNN. “And in some places, it’s still easier to buy a gun than cast a vote. That’s wrong. It’s undemocratic. And it’s why we need a New Voting Rights Act in America.”

Expanding voter access is a pitch that helped Democrats take back the House in 2018. Whether it can carry Moulton to the top of a crowded Democratic field remains to be seen.

Dear Elon Musk: Here’s how you should donate your money
The tragedy of Hillary Clinton
Why everyone hates the Patriots
How cricket went from an old British pastime to primetime entertainment for billions
AOC streamed a video game on Twitch — and met 400,00 young voters on their own turf
Scientists warn we may need to live with social distancing for a year or more