Report: 6-year-old separated from her mother was sexually abused in government custody 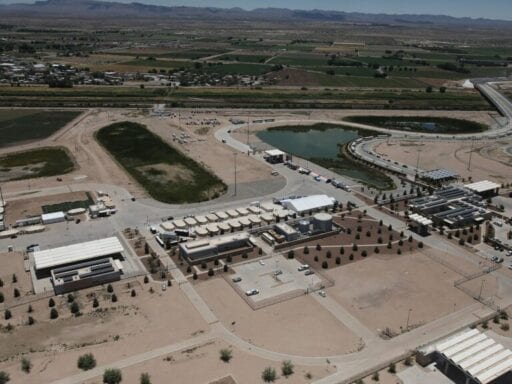 The report follows a ProPublica investigation documenting dozens of cases of sex offenses at immigrant youth shelters in recent years.

A 6-year-old migrant girl, separated from her family, was sexually abused while in government custody at a facility in Arizona, according to a report in the Nation.

The girl, identified as D.L. in documents obtained by the Nation, was separated from her mother at the border on May 26. She and her mother had fled Guatemala and were split up as part of the Trump administration’s “zero tolerance” border policy, which sought to prosecute all adults crossing the border illegally, even those seeking asylum.

The girl was sent to a shelter outside Phoenix, run by Southwest Key Programs, which is the largest operator of immigration shelters contracted by the US government, where she was reportedly sexually abused by an older child being housed at the residence. Staff members contacted the girl’s father — an undocumented immigrant in California — to let him know about the incident, and assured him the abuse would not happen again. According to the Nation:

D.L. was reported to have been sexually abused on June 4, 2018. On June 12, one day after D.L.’s father was contacted, the 6-year-old girl was presented with the form stating that, as part of the facility’s intervention protocol, she had been instructed to “maintain my distance from the other youth involved” and had been provided “psychoeducation,” described in the document as “reporting abuse” and “good touch bad touch.” The form, posted below, shows D.L’s “signature”—a single letter “D,” next to the characterization of her as “tender age”—which supposedly confirms that D.L understands “that it is my responsibility to follow the safety plan” reviewed with her.

The safety plan, however, allegedly did not prevent the same child from hitting and fondling D.L. again, an incident her father was informed of on June 22.

The signature ‘D’ in block caps is the most heart-breaking single letter I’ve ever seen. And the fact that this form exists is window into the routinization of horror: https://t.co/I6xs14qhw8

D.L. has been reunited with her parents, but the story exposes a disturbing consequence of the Trump’s administration family separation policy and the problems of caring for children in government custody.

“I hugged her, I was crying. She didn’t recognize me,” D.L.’s mother told the Nation, about her reunion with her daughter. “She told me that she thought I was never going to be with her again and that she was going to have to live with another lady. She behaved like she was still in detention. She wouldn’t touch me, hug me or kiss me.”

The Trump administration put a halt to separating all families at the border in June under public pressure, and more than 1,400 children were reunited with their families by a court-order July 26 deadline. But more than 700 children remain in government custody, including hundreds whose parents have already been deported back to their home countries.

The report in the Nation and an investigation by ProPublica reveal troubling instances of abuse at facilities contracted to care for migrant children. ProPublica obtained police reports and call logs from 70 of the 100 immigrant youth shelters run by the Department of Health and Human Services, which is responsible for both unaccompanied minors — children who arrive at the border without a parent or guardian — and the children who were separated from their families under Trump’s policy.

ProPublica found that in the last five years — dating back to the surge of unaccompanied minors from Central America in 2014 during the Obama administration — police have responded to at least 125 calls reporting sex offenses at shelters housing mostly immigrant youth.

These risks always existed for immigrant youth in shelters. But Trump’s policies don’t help the situation.

It’s not clear if any of the police reports analyzed by ProPublica specifically relate to separated children, and many predate Trump’s family separation policy. But the reports raise pressing concerns about the well-being of migrant children in the government’s care, especially as some have already faced the traumas of abuse in their home countries, or of being split from their parents.

Experts told ProPublica that the chaotic implementation of the Trump administration’s family separation plan also may have strained the resources and staff capacity of some of these facilities. That can make it more likely that cases of abuse and other misconduct may slip past notice or leave shelters struggling to deal with vulnerable kids — especially immigrant children, who may be nervous to report abuse because of worries about how it might affect their immigration status.

“If you’re a predator, it’s a gold mine,” Lisa Fortuna, director of child and adolescent psychiatry at Boston Medical Center, told ProPublica. “You have full access and then you have kids that have already had this history of being victimized.”

Mississippi and Iowa join the ranks of states reopening nonessential businesses
Rep. Bobby Rush on how his bill would address the “modern-day lynching” of Ahmaud Arbery
Trump slashed refugee levels this year. For 2019, he’s slashing them even further.
Dozens of Google employees say they were retaliated against for reporting harassment
Black Lives Matter helped shape the 2020 election. The movement now has its eyes on Georgia.
Your food delivery app comes at a cost to restaurants