Report: Pruitt asked staffers to use personal credit cards for his hotel bookings 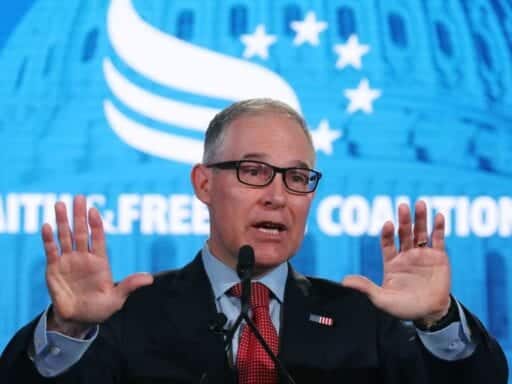 Pruitt aides detailed the wide-ranging scope of his abuses.

Among the latest scandals plaguing EPA Administrator Scott Pruitt: He reportedly called on staffers to make his hotel bookings on their own personal credit cards — and in at least one case, he didn’t reimburse the payment in time.

This revelation was one of many details that have come to light about Pruitt in recent weeks, according to the Washington Post. In interviews last week, two of his top aides told congressional staffers that Pruitt’s use of staff for nonofficial tasks was part of a larger pattern of behavior; the EPA administrator seemingly had no issue with leveraging his staff to address his personal legal problems or help his wife find a high-paying job.

The Post also notes that Pruitt’s questionable approach to money — which has included a penchant for exorbitant air travel — is something that bled over from the transition. That’s when Pruitt reportedly asked staffers to charge hotel reservations for him on their personal credit cards, according to an EPA official:

In one instance, according to former deputy chief of staff Kevin Chmielewski, [then-executive scheduler Sydney] Hupp was stuck with a bill of roughly $600 for a booking she had made for the administrator’s family during the transition. Chmielewski said in an interview last month that he was in Jackson’s office when Hupp approached Pruitt’s chief of staff to explain that the period for transition reimbursements had expired and that Pruitt had not covered the bill.

The incident, aspects of which were first reported in the Hill newspaper, prompted Jackson to leave $600 in cash in Hupp’s drawer.

As the former acting director of the Office of Government Ethics, Don Fox, told the Post, the person who would be expected to dole out consequences for Pruitt’s behavior — which has now spawned a series of scandals revolving around things as varied as a secondhand mattress, Chick-fil-A, and lotion — is none other than President Donald Trump.

“If we were talking about any other federal employee, it would be that person’s supervisor to take disciplinary action, which could be anything from counseling to dismissal from public service,” he said in an interview with the Post. “This falls squarely on the shoulders of the president, and he seems to do nothing but go out of his way to praise Scott Pruitt.”

Trump may not be calling him out, but this teacher is

As talk of Pruitt’s scandals continue to swirl, Kristin Mink, a teacher at the Washington, DC, school Sidwell Friends, is among those who have had enough.

Mink went viral on Monday after posting a Facebook video in which she confronted the EPA administrator while he was eating at a restaurant in Washington, DC. In the video, she lambasts him for his approach to climate change and fuel policy, and urges him to resign.

EPA head Scott Pruitt was 3 tables away as I ate lunch with my child. I had to say something. This man is directly and significantly harming my child’s — and every child’s — health and future with decisions to roll back environmental regulations for the benefit of big corporations, while he uses taxpayer money to fund a lavish lifestyle. He’s corrupt, he’s a liar, he’s a climate change denier, and as a public servant, he should not be able to go out in public without hearing from the citizens he’s hurting. U.S. Environmental Protection Agency U.S. EPA Administrator Scott Pruitt

ETA: You don’t have to wait til your next Pruitt sighting to take action! Click here to help Boot Pruitt! https://www.addup.org/campaigns/boot-pruitt

“We deserve to have somebody at the EPA who actually does protect our environment, somebody who believes in climate change and takes it seriously for the benefit of all of us, including our children,” Mink said, while carrying her 2-year-old son and noting that he “loves animals … clean air … and clean water.”

“I would urge you to resign before your scandals push you out,” she added. Mink joins a long list of Democratic lawmakers and even some Republicans, like Reps. Carlos Curbelo (FL) and Elise Stefanik (NY), who have said that Pruitt should step down.

Pruitt listened while Mink spoke, but did not appear to respond to the concerns she laid out in the video, ultimately leaving the restaurant. An EPA spokesperson told HuffPost that Pruitt also thanked her, and his departure “had nothing to do with the confrontation, he had simply finished his meal and needed to get back to EPA for a briefing.”