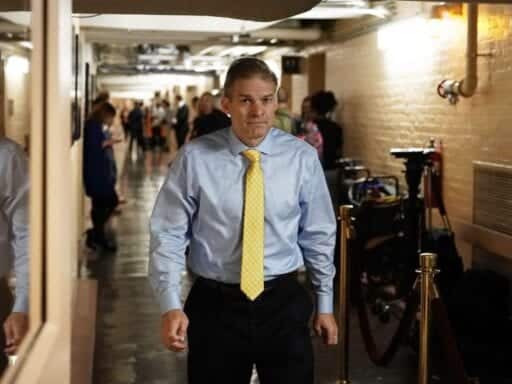 Ohio Republican Rep. Jim Jordan is accused of brushing aside rampant sexual abuse in Ohio State University’s athletics department during his time there, according to a new report from NBC.

Several former Ohio State wrestlers say Jordan, who before becoming one of the House’s most conservative lawmakers was a champion college wrestler and assistant wrestling coach at Ohio State from 1986 to 1994, failed to stop the team doctor from molesting student athletes.

The university has been conducting an investigation into Dr. Richard Strauss, who died in 2005, for repeated reports of sexual assault and rape. According to student testimony, Strauss is estimated to have sexually assaulted or raped at least 1,500 — and possibly up to 2,000 — athletes at Ohio State between 1978 through 1998.

Jordan has repeatedly denied knowing anything about Strauss’s conduct. But his denial doesn’t add up, several of Jordan’s former athletes told NBC:

Three former wrestlers told NBC News that it was common knowledge that Strauss showered regularly with the students and inappropriately touched them during appointments, and said it would have been impossible for Jordan to be unaware; one wrestler said he told Jordan directly about the abuse.

One student, Dunyasha Yetts, a wrestler at Ohio State in 1993, said he went to Strauss for a thumb injury and instead had his pants pulled down. Yetts said he and his teammates told Jordan multiple times about Strauss.

“For God’s sake, Strauss’s locker was right next to Jordan’s, and Jordan even said he’d kill him if he tried anything with him,” Yetts told NBC.

Another former wrestler, Mark DiSabato, whose decision to go public with his allegations against Strauss prompted the university’s investigation, said Jordan told him to “please leave me out of it” and “not to get him involved” in the reports.

“I considered Jim Jordan a friend,” DiSabato said. “But at the end of the day, he is absolutely lying if he says he doesn’t know what was going on.”

The allegations against Jordan come during a public reckoning over the all-too-often unaddressed prevalence of sexual assault in every sphere, from college campuses to Hollywood and government. Earlier this year, Larry Nassar, a team doctor for the US’s gymnastics team, was sentenced to 175 years of jail time for sexually assaulting hundreds of young athletes — allegations that had been made, and silenced, for years.

As sexual harassment awareness grows as a national flashpoint, there has been increased attention turned toward Congress, where the striking power imbalance between low-paid employees and the nation’s most powerful politicians all too often allows for unfettered corruption and misconduct. Though the allegations against Jordon are about his time before he was in public office, they still might create pressure for him to be held accountable for allegedly being a bystander.

Climate change and soaring flood insurance premiums could trigger another mortgage crisis
The White House should now be ground zero for a huge contact tracing operation
Trump’s Republican Party, explained in one photo
Why the new Covid-19 variants could kill more people, in 2 charts
Taylor Swift (and her fans) won a battle in her war against Scooter Braun and Big Machine Label Grou...
Ousman Darboe could be deported any day. His story is a common one for black immigrants.