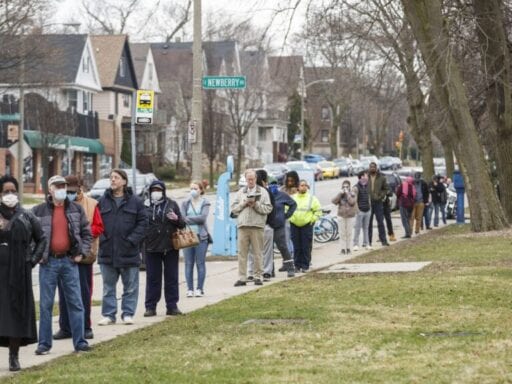 Share
Loading...
A line to vote in Wisconsin’s spring primary election wraps around for blocks on April 7, 2020, at Riverside High School in Milwaukee. | Sara Stathas for the Washington Post

But the GOP has plenty more tricks up its sleeve.

Wisconsin’s April 7 election could have been a disaster for voting rights. Election officials received four or five times more absentee ballot requests than they normally do in a spring election. Milwaukee closed all but five of its 180 polling locations, in large part because it struggled to find poll workers during a pandemic.

And, on top of all that, Republicans in the state legislature, on the state Supreme Court, and on the Supreme Court of the United States all thwarted efforts to make sure voters would not be disenfranchised by the unique challenges presented by an election held when most voters were stuck at home to prevent the spread of the coronavirus.

Yet a report by the Wisconsin Elections Commission suggests the election went much better than it could have. The overwhelming majority of voters who wanted to vote absentee were able to do so. And it is likely that only a small percentage of voters were disenfranchised by a US Supreme Court decision backing the Republican Party’s effort to make it harder to cast a ballot.

The report, in other words, suggests that a sophisticated and multi-front effort by Republicans to prevent many Wisconsinites from casting a ballot achieved very limited results.

That’s not a reason for voting rights advocates to relax. Turnout is likely to be much higher in the November general election than it was in Wisconsin’s spring election, so election officials could still be overwhelmed by ballot requests in November. Republicans also have a $20 million legal war chest that they can use to obtain court orders limiting the franchise.

But it does appear that the specific playbook Republicans ran in Wisconsin’s April election did not deliver much in the way of results. Notably, the most consequential race on the ballot in April was a contest between conservative state Supreme Court Justice Daniel Kelly, and liberal challenger Jill Karofsky — and Karofsky won that election by nearly 11 points.

It is unclear whether Karofsky won such a commanding victory because this election took place the same day as a Democratic presidential primary, because Wisconsin Democrats rose up in anger against the GOP’s voter suppression tactics, or for some combination of reasons. But, at the very least, the Wisconsin Election Commission report suggests that the GOP’s tactics did not give Kelly a significant advantage in the April race.

The fight over voting rights in Wisconsin, briefly explained

The weeks leading up to Wisconsin’s April 7 election were marred by partisan fights over when the election would be held, what rules would apply, and which ballots would be counted.

As the election drew nigh, election officials feared they’d be overwhelmed by the approximately 1.3 million requests for absentee ballots they received. Meanwhile, the state was so starved for people willing to work the polls during a pandemic that, at one point, Democratic Gov. Tony Evers decided to use members of the National Guard to staff the polls.

To relieve the pressure on voters and election workers, Evers proposed legislation that would automatically mail a ballot to every registered voter in the state, but this proposal was dead on arrival in the Republican-controlled legislature. On the eve of the election, Evers also attempted to reschedule it to a later date, but the Republican-controlled state Supreme Court struck down this effort as well.

Several federal lawsuits also sought to relieve the pressure on the state election system. Less than a week before the April 7 election, Judge William Conley, an Obama appointee, handed down an order protecting absentee voters who may not receive a ballot soon enough to return it before Election Day. Though a state law required all absentee ballots to be received by the state by 8 pm on April 7, Conley extended this deadline to 4 pm on April 13.

Wisconsin’s April election, by the numbers.

The upshot of the Wisconsin Election Commission’s report, however, is that the Supreme Court’s decision in Republican National Committee probably mattered fairly little. Of the more than 1.3 million absentee ballots sent by the state, nearly 89 percent were returned by voters and counted by the state. Of these, just over 79,000 were received between April 8 and April 13 but were counted because they had the required postmark.

Despite the unusual challenges facing voters during the April election, state election officials weathered these challenges fairly well. A normal percentage of absentee ballots were rejected, and a normal percentage of mailed ballots were not returned. The Supreme Court decision requiring some absentee ballots to be tossed out does not appear to have had a significant impact on the race.

Indeed, there is some evidence that the particular tactic the Republican Party used in Wisconsin’s April election — targeting absentee voters who submit their ballots late in the election cycle — may have benefited Democrats. According to Michael McDonald, a political science professor at the University of Florida, data from Ohio’s recent primary election suggest that conservative, rural voters are especially likely to return absentee ballots late.

Cuyahoga, Franklin, and Hamilton:
1.7% of all returned mail ballots were late

In the other 66 counties we have data for:
4.1% of all mail ballots were late

Voting rights are still in danger in the November general election

There is still good reason to fear that many voters will be disenfranchised in November.

For one thing, turnout is likely to be much higher in November than it was in a spring election. Just over 1.5 million ballots were cast in the April race between outgoing Justice Kelly and Justice-elect Karofsky. By contrast, as the Wisconsin Election Commission notes, “the last three presidential general elections all saw more than 3 million ballots cast.”

So Wisconsin election officials may have to deal with twice as many ballot requests in November as they received in April. And every other state could receive a similar crush of absentee ballot requests. That could easily overwhelm state elections officials, who may struggle to mail out all of these ballots soon enough for voters to return them by Election Day.

Moreover, just because the specific tactics the Republican Party deployed in Wisconsin appear to have achieved very little, that does not mean that the GOP nationally won’t find other ways to suppress the vote. The GOP has a massive legal war chest and is no longer subject to a 1982 court order that discouraged voter intimidation in the past but was lifted in early 2018. That means that 2020 will be the first presidential election (but not the first midterm election) in nearly four decades without a court order restricting voter intimidation by the national Republican Party.

On a similar note, Texas’s Republican attorney general has threatened criminal prosecutions against voting rights activists who encourage younger voters to cast absentee ballots. And Georgia’s Republican secretary of state formed a task force, which includes law enforcement officers and prosecutors, that purports to “investigate any allegations or instances of potential voter fraud.”

Actual voter fraud is so rare that, according to the Brennan Center for Justice, “it is still more likely for an American to be struck by lightning than to commit mail voting fraud.”

Some states also have absentee voting laws, moreover, which could disenfranchise millions during a pandemic. Texas’s law, for example, permits voters over the age of 65 to obtain absentee ballots fairly easily, but it makes it much harder for younger voters to obtain such ballots. And Texas’s Republican attorney general is fighting hard in court to prevent younger voters from gaining greater access to absentee ballots — most likely because older voters have tended to favor Republicans.

And, of course, the question of whether voters are able to cast ballots in November is separate from the question of whether voters can safely do so. A quarter of Wisconsin voters cast an in-person ballot on April 7. Former Surgeon General Joycelyn Elders has partnered with a liberal advocacy group to study whether these in-person voters spread the coronavirus while they were at the polls.

One study suggests that “a 10% increase in the number of voters per polling place corresponded to a roughly 17% higher rate of positive coronavirus tests in that county two and three weeks later, after the coronavirus incubation period had passed,” although other researchers disagree with this conclusion.

All of which is a long way of saying that the Wisconsin Election Commission’s report is less a reason for voting rights advocates to relax than a reason for them to heave a sigh of relief — and then continue working.

The 6 types of tidy people: A comic
This video clip shows how Trump defenders have dramatically moved the misconduct goalposts
For years, brands have been pushing an at-home lifestyle. No one expected it to happen like this.
In Kazuo Ishiguro’s sweet new novel Klara and the Sun, a robot befriends a teenage girl
The fight to end Roe v. Wade enters its endgame next week
Why North Carolina has giant lagoons of pig poop