Report: the FBI has a recording of Trump talking about paying off a former Playboy model 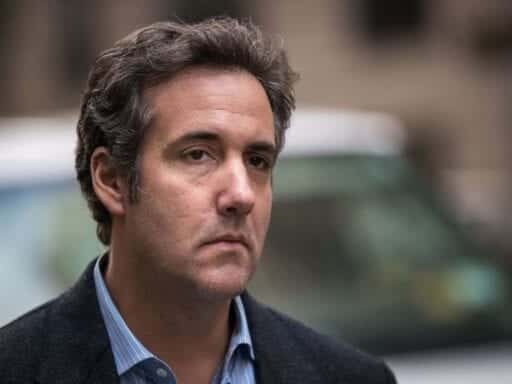 The Department of Justice investigation into former Trump attorney Michael Cohen now includes a secret recording of President Donald Trump discussing a payoff to a former Playboy model who claims she had an affair with him, the New York Times reports.

The model in question is Karen McDougal, who allegedly had an affair with Trump in 2006 and 2007. Cohen had secretly recorded the conversation — which took place two months before the presidential election — and the tape was seized in a raid of Cohen’s office earlier this year.

The recording is the latest development in an ongoing Justice Department investigation scrutinizing payments Cohen made to different women to protect Trump’s reputation prior to the election, which included a $130,000 payment to pornographic actress Stormy Daniels. The payments may have violated campaign finance law.

Trump lawyer Rudy Giuliani told the Times’ Matt Apuzzo, Maggie Haberman, and Michael S. Schmidt that Cohen and Trump’s conversation about McDougal did, in fact, take place. He said that the payment was never made and that the recording did not indicate any wrongdoing on behalf of the president. “Nothing in that conversation suggests that he had any knowledge of it in advance,” Giuliani said, adding that Trump had even pressed for the use of a check to ensure proper documentation if any payment were to transpire.

The big question: are there other tapes out there?

McDougal had alleged a roughly year-long affair with Trump and sold her story to the National Enquirer for $150,000 during the presidential campaign. The publication did not ultimately publish the piece, and McDougal has since argued that Cohen was involved in interfering with the agreement. In April, McDougal reached a settlement with American Media, the Enquirer’s publisher, allowing her to talk publicly about the affair.

The Wall Street Journal reported on the existence of an American Media payment to McDougal in 2016. At the time, Trump spokesperson Hope Hicks said the campaign had no knowledge of it and slammed McDougal’s claims as “totally untrue.”

The bigger question, though, is if Cohen has other recordings of the president, and if so, what he’s saying on them. Haberman, the Times reporter, tweeted that the tape “appears to be the only one”:

Lordy, there’s a tape. Appears to be the only one. ⁦@nytmike⁩ ⁦@mattapuzzo⁩ and me https://t.co/rUi0eh6wem

But CNN has reported that there were other tapes of Trump in Cohen’s files, and those tapes are now in the hands of the FBI:

Cohen has been perceived as an increasing liability for Trump in recent months, with numerous reports suggesting that he could be on the verge of flipping. He’s also hired “legal crisis manager” and longtime Clinton friend Lanny Davis, a sign that he might be inching closer to such a move, writes Vox’s Andrew Prokop.

If he does end up turning on Trump, Cohen’s role in payments for alleged Trump affairs is unlikely to be the only topic prosecutors will want his perspective on. His position would make him a prime witness for special counsel Robert Mueller’s investigation on Russian interference in the 2016 election as well.

The new Brexit deadline will be January 31
One Good Thing: I’m obsessed with the latest Phoebe Bridgers album
Elizabeth Warren marches with striking Chicago teachers, a day after releasing new K-12 education pl...
Vox Sentences: Hope for a US-Taliban peace deal
How Fox News twisted the Kavanaugh scandal into a way to attack the New York Times
Paleologos on the poll: Ask voters about Trump and get an earful, regardless of party