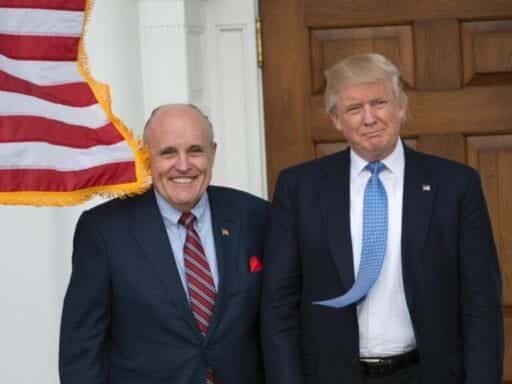 Details remain murky. But there’s been a scandal unfolding in plain sight.

The mysterious whistleblower complaint about President Donald Trump that’s roiling the administration is at least in part about Trump asking the president of Ukraine to investigate Joe Biden’s son, the Washington Post reported Friday.

A whistleblower who is part of the US intelligence community filed this complaint a little over a month ago. The full details of the complaint remain murky, and it reportedly involves a broader set of events than a single phone call, per the New York Times. But the Trump administration is trying to prevent further details from coming to light.

For some time now, there have been vaguely sourced reports and rumors that Trump was trying to pressure the Ukrainian government into launching an investigation of former vice president (and frontrunner for the Democratic presidential nomination) Joe Biden — possibly by withholding military aid to Ukraine unless they complied.

On Friday, the Wall Street Journal’s Alan Cullison, Rebecca Ballhaus, and Dustin Volz reported that, during a July phone call with Ukraine’s president, Trump pressured him “about eight times” to work with his lawyer Rudy Giuliani on an investigation into Joe Biden’s son Hunter. The Journal did not confirm that any quid-pro-quo involving military aid was involved.

On Thursday, Trump lawyer Rudy Giuliani tweeted that if Trump told Ukraine to “investigate corruption that affects US” he’d just be “doing his job,” and complaining that “the Biden Family… bilked millions from Ukraine.” (Giuliani later told a reporter that he wasn’t confirming Trump actually did this — he was just saying, if he did do this, it would be fine and dandy. Giuliani has also previously confirmed that he himself has been trying to get Ukraine to investigate Biden.)

A President telling a Pres-elect of a well known corrupt country he better investigate corruption that affects US is doing his job. Maybe if Obama did that the Biden Family wouldn’t have bilked millions from Ukraine and billions from China; being covered up by a Corrupt Media.

If Trump did this, it would be a shockingly corrupt use of his foreign policy powers — a demand that a foreign country intervene in the 2020 election to help him by digging up dirt on his potential opponent, or have its security put at risk.

And the inspector general for the intelligence community has said the complaint “relates to one of the most significant and important of the DNI’s responsibilities to the American people.” So it seems important.

The idea that Trump’s team would try to get the Ukrainian government to investigate Biden’s family isn’t just theoretical — Giuliani, Trump’s lawyer, has openly said he’s been doing just that.

Ukraine-related corruption has played an outsized role in Trump scandals already — a major part of the Mueller probe was Paul Manafort’s prosecution for financial and lobbying crimes related to his work for a former Ukrainian regime. And back during summer of 2016, when Manafort was Trump’s campaign chair, he was plagued by reports that the Ukrainian government was looking into his payments. (Manafort was convicted and is serving a seven-and-a-half year prison sentence.)

So Trump’s team seems to have had the idea to try and drum up a similar scandal involving Joe Biden.

The details relate to Biden’s ne’er-do-well son Hunter, who joined the board of a Ukrainian natural gas company, Burisma, in 2014. Two years later, Ukraine’s prosecutor general, Viktor Shokin, was ousted, after pressure from Vice President Biden and other Western officials. Shokin has reportedly claimed he was pushed out because he was investigating Burisma’s payments to Hunter Biden. However, “there is no credible evidence that Biden sought Shokin’s removal in order to protect Hunter,” the New Yorker’s Adam Entous wrote earlier this year — instead, the rationale was said to be that he wasn’t doing enough to investigate corruption.

Now, in an obvious effort to cause political problems for Joe Biden’s 2020 campaign, Giuliani has been pushing the new Ukrainian government (President Volodymyr Zelensky was just elected this April) to open an investigation into the Biden matter, as well as into whether there was any foul play in the earlier Ukrainian investigation of Manafort. Giuliani confirmed he was doing all this to the New York Times back in May, and the effort continued through August.

But Giuliani was cagey on Trump’s personal role in the effort. He told the Times in May that Trump supports his efforts and “he basically knows what I’m doing, sure, as his lawyer.” In August, though, he told the Times he was just acting as a private citizen — though, for some reason, State Department officials were involved in Giuliani’s communications with Ukrainian officials.

More recently, there have been rumors that the effort to pressure Ukraine into investigating Biden involved President Trump himself — and that he was threatening the country by saying he’d withhold US military aid unless they complied.

On August 28, Politico’s Caitlin Emma and Connor O’Brien reported that the Trump administration was “slow-walking $250 million in military assistance to Ukraine.” They wrote that Trump had personally asked his national security team to review the program, supposedly to ensure the money was being spent in American interests. “The funds for Ukraine can’t be spent while they’re under review and the money expires at the Sept. 30 end of the fiscal year,” Emma and O’Brien wrote.

Critics cried foul, accusing Trump once again of trying to support policies preferred by Putin (Russia and Ukraine have been in a military conflict since 2014). And then on September 5, a Washington Post editorial said that they’d been told that Trump was, in fact, trying to force the Ukrainian government to investigate Biden. The Post wrote:

Some suspect Mr. Trump is once again catering to Mr. Putin, who is dedicated to undermining Ukrainian democracy and independence. But we’re reliably told that the president has a second and more venal agenda: He is attempting to force Mr. Zelensky to intervene in the 2020 U.S. presidential election by launching an investigation of the leading Democratic candidate, Joe Biden. Mr. Trump is not just soliciting Ukraine’s help with his presidential campaign; he is using U.S. military aid the country desperately needs in an attempt to extort it.

This raised many eyebrows, because the sourcing was completely unclear — “we’re reliably told” — and it came in an editorial, not a news article.

The rumors were evidently flying fast and furious. On September 2, Vice President Mike Pence met President Zelensky in Warsaw. At a press conference afterward, the Associated Press’s Jill Colvin asked: “Can you assure Ukraine that the hold-up of that money has absolutely nothing to do with efforts, including by Rudy Giuliani, to try to dig up dirt on the Biden family?” Pence conspicuously did not make that assurance, instead saying, “as President Trump had me make clear, we have great concerns about issues of corruption.”

On September 12, the Trump Administration agreed to let the military aid for Ukraine move forward after all.

Asked Friday morning whether he had talked to the new Ukrainian president about Biden, Trump said, “It doesn’t matter what I discussed.”

But by Friday afternoon, the Wall Street Journal reported that, during a July phone call with Zelensky, Trump had pressured Zelensky “about eight times” to work with Giuliani on an investigation into Hunter Biden. (They did not confirm that any military aid threat or promise was involved.)

Now there’s this whistleblower complaint — but the details remain murky

Amid all this comes reports of this mysterious whistleblower complaint.

On August 12, a whistleblower who is part of the US intelligence community filed a complaint with Intelligence Community Inspector General Michael Atkinson. Atkinson deemed the complaint credible and a matter of “urgent concern,” and wanted the congressional intelligence committees informed.

But his superiors at the Office of the Director of National Intelligence have stepped in and refused to give any details of the complaint to Congress — even though a law seems to require them to do this.

Atkinson ended up telling the House Intelligence committee of the complaint’s existence himself in a September 9 letter — but he didn’t give any details on what it was about. But in a subsequent letter, he said the complaint “relates to one of the most significant and important of the DNI’s responsibilities to the American people.”

So House Intelligence Committee chair Adam Schiff went public about all this last week, voicing fears of a cover-up. And reporters have tried to figure out just what the whistleblower complaint was about.

No one has nailed down the whole thing. It’s at least in part about Trump’s request to the Ukrainian president to investigate Biden’s son, per the Post, but it’s broader than any one call or promise and instead about several actions by Trump.

And it has not yet been confirmed that the complaint is about a threat from Trump to withhold military aid to Ukraine — that’s still speculation. But what has unfolded in public view in this whole saga is already scandalous — and there’s likely more to come.

The US embassy in the UK is telling Americans to “keep a low profile” during Trump’s visit
Don’t wait: the case for giving sooner rather than later
Bernie Sanders got more young voters in New Hampshire than everyone else combined
The stimulus law’s student loan payment freezes, explained
Cory Booker rallies Democrats in Virginia, where he could help the party, and vice versa
The US and Taliban sign agreement meant to end America’s longest war