Republicans don’t care what you think 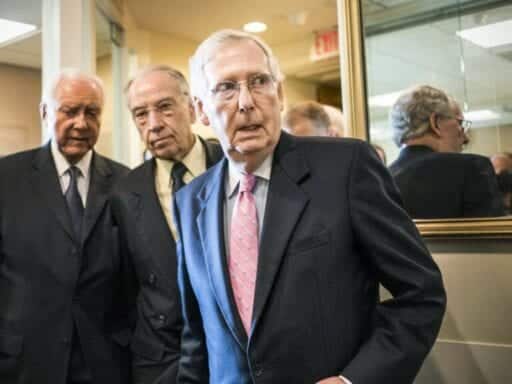 Republicans lost the argument, but they ultimately had the votes.

Forty-nine Senate Republicans and one Democrat just confirmed Brett Kavanaugh to the United State Supreme Court. No allegations, no protesters, no public opinion poll showing Brett Kavanaugh is the most unpopular person to be elevated to the nation’s highest court in recent history was going to stop them.

To the senators who confirmed him, it did not matter that Christine Blasey Ford testified for four hours under oath and told the Senate Judiciary Committee that she was “100 percent” certain Brett Kavanaugh was the boy who pulled her into a room at a high school party 36 years ago and tried to force himself on her. It did not matter that Kavanaugh appeared to, at best, mislead senators in his own testimony. It did not matter that, unlike Clarance Thomas who also faced allegations of sexual misconduct, the public thought Kavanaugh’s accuser was more credible than he was.

Sen. Lisa Murkowski (R-AK) framed the Senate’s decision simply, days before the final vote: “It is about whether or not a woman who has been a victim at some point in her life is to be believed.”

The Senate has answered definitively: We do not believe her, not really, and we don’t care that the public does.

This is the governing ideology of the Republican Party: We don’t care what anybody else thinks. We have the power. We have the will. We have the votes. We’ll do what we want.

Republicans don’t care if their nominee is unpopular

The American public believes Christine Blasey Ford more than they believe Brett Kavanaugh. An NPR/PBS NewsHour/Marist poll found that 45 percent of Americans thought she was the one telling the truth at last week’s Senate hearing, while 33 percent thought Kavanaugh was. It was a notable shift from the Anita Hill-Clarence Thomas hearings, when 58 percent of Americans said they believed Thomas more and only 24 percent said Hill.

Thomas, in other words, was confirmed to the Supreme Court with overwhelming public support, compared to his accuser. Now Kavanaugh will also be confirmed — but in direct defiance of the public, which finds his accuser, Ford, more credible than him. (Kavanaugh repeatedly denied the allegations.)

We could litigate the merits of Ford’s allegations and Kavanaugh’s credibility until the end of days. Republicans tried to have it both ways, being careful to suggest she experienced something traumatic but speculating perhaps she was mistaken about who had done it to her.

Her testimony, under sworn oath, said she was “100 percent” certain her attacker was Kavanaugh. Republicans also have no evidence to support their claims that Ford might have been assaulted some other time, in some other place, by some other person.

Yet they kept making them, ignoring any questions about Kavanaugh’s own honesty and clinging to an ill-defined standard of additional corroboration for an alleged assault that took place nearly 40 years ago. And Democratic Sen. Joe Manchin took the same position.

But that was typical of the GOP’s argument. Whatever rhetorical contortions were necessary, whatever procedural formalities must be endured, whatever must be done to put Brett Kavanaugh on the Supreme Court would be done.

Republicans are fine pushing past the backlash. Look at health care.

That is the normal way of doing business under two years of Republican rule and President Trump.

It started with Obamacare repeal. If Democrats bent the rules when they passed the health care law in the first place, Republicans abandoned the legislative process altogether to try to repeal it.

There was no regular order, no committee hearings to consider and draft and produce the legislation — until some Republican senators expressed discomfort with passing a rushed bill that was written behind closed doors. So the Senate held some show hearings, to make it look like the normal process was being followed. It was not unlike the heavily curtailed FBI investigation that was permitted only after a few Republican senators expressed discomfort with Kavanaugh’s nomination because of the sexual assault allegations.

Republicans twisted themselves in knots to argue they weren’t rolling back protections for preexisting conditions (though almost every expert said they were) or that they wouldn’t be making deep budget cuts to Medicaid (instead asserting they were “slowing the growth of the program’s spending”). They were so desperate to do something, anything, to deliver on a seven-year promise to repeal and replace the law that the Senate was ready to pass a bill that Republicans themselves didn’t want to become law just to keep the debate alive.

The polling was unambiguous: The Republican health care plan was the most unpopular major legislation in three decades. But the House passed a bill and the Senate came within one John McCain thumbs-down of passing its own.

Republicans lost the argument, and that time, they also didn’t have the votes. But just barely.

The other major thing on Republicans’ agenda when they took power was cutting the corporate tax rate. Unlike health care, Republicans care a lot about cutting taxes. Tax cuts are the most unifying policy within the Republican Party — and preserving a conservative-leaning judiciary isn’t far behind.

“The Republican Party does three things: cut taxes, kill terrorists and confirm judges. When we do those things, we energize our base and are also appealing to independent voters,” Matt Gorman, a spokesperson for the National Republican Congressional Committee, told Katie Glueck and Adam Wollner of McClatchy this week.

But even though tax cuts tend to be popular, this tax cut package was not. In fact, the Republican tax bill actually grew more unpopular as Congress debated it, as the Wall Street Journal reported at the time — but they passed it anyway, with no dissenting GOP votes in the Senate. It only got worse with age and lost even more ground with the public by June, when just 34 percent of Americans said they supported the tax law.

What the Republican Party cared about — and ultimately what got the votes — was the donor class, which was very pleased with the package.

Conservatives wanted Kavanaugh. They got him. And that’s all that mattered.

Senate Republican leader Mitch McConnell has made confirming judges his top priority, and he has been fixated for months on filling retired Justice Anthony Kennedy’s seat.

Ford’s allegations, as well as those of Deborah Ramirez and Julie Swetnick, put the Republican dream at serious risk. McConnell treated Ford’s allegation, more or less, as an inconvenience: Before she even testified, he promised the conservative base that Senate Republicans would “plow right through.” Ultimately, he took the risk of pushing through an unpopular nominee, and it paid off. He had the votes.

Through all the protests, it revealed that Republicans had a common enemy — those preening, devious Democrats — and that trumped any doubts about whether Kavanaugh might have assaulted Ford. In a Senate floor speech justifying her vote for Kavanaugh, Sen. Susan Collins (R-ME) focused early and often on the nameless “special interests” that had been arrayed against Kavanaugh well before Ford’s story was known and implied that Ford herself had been exploited by the judge’s enemies.

That Kavanaugh was the most unpopular, most divisive Supreme Court nominee in a generation didn’t ever factor into it. The base was happy, and Republicans have seen their odds of holding the Senate rise. The conservative intelligentsia was happy, finally nearing the completion of their decades-long quest to make and keep the high court conservative. They were the ones who mattered.

Christine Blasey Ford knew this might happen when she came forward.

She was right: The destination was already set.

What you need to know about Facebook’s latest privacy tool
The two-party system is killing our democracy
The CDC confirms a third US coronavirus case. Experts say it’s no cause for alarm.
A New Year’s resolution for everybody: cook more
Democratic National Convention 2020
How Netflix is winning more with less content