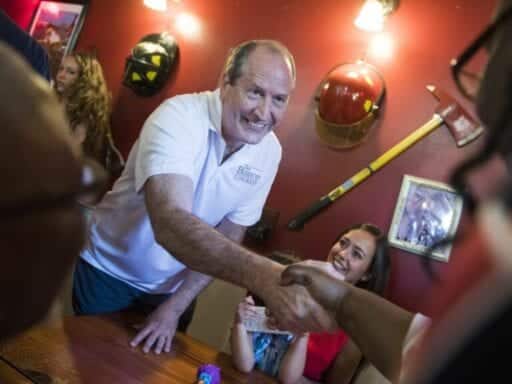 Dan Bishop’s narrow win suggests that Republicans need to dial up their efforts to keep the suburbs in 2020.

His victory comes in the wake of a massive scandal that plagued the district’s election last fall, and suggests that Republicans still have a lot to worry about in 2020.

North Carolina’s Ninth is, after all, a staunchly conservative district that’s been electing Republicans since the 1960s, and one President Donald Trump won by 12 points in 2016. Bishop’s win should have been relatively easy, but was overshadowed by the previous Republican candidate fielding allegations of ballot fraud and suburban voter pushback toward Trump. The fact that Bishop held onto the seat for Republicans will surely be a relief for the party.

Still, Republicans looking ahead to 2020 might worry about similar districts; the tight margin doesn’t bode well for competitive seats in suburban districts across the country. If anything, Bishop’s race suggests GOP candidates in these places should be concerned about maintaining any existing advantages they currently have.

Bishop won the Republican primary for September’s special election after Mark Harris, the previous GOP candidate, declared that he wouldn’t pursue another run.

Harris, who had come out ahead of McCready by less than 1,000 votes last fall, was never certified as the official winner of the race due to allegations that emerged about absentee ballot tampering. As Vox’s Dylan Scott has reported, the allegations were so serious the state election board ultimately ordered a new election:

State investigators established their theory of the case — that a Republican operative, Leslie McCrae Dowless, directed a coordinated scheme to unlawfully collect, falsely witness, and otherwise tamper with absentee ballots — and workers who say they had assisted him in the scheme delivered damning testimony describing their activities. Dowless himself refused to testify, on the advice of his lawyer.

On Thursday afternoon, after four days of evidence indicating fraud and an attempt to conceal the scheme from state investigators, Harris himself told the state election board that he believed a new election should be called. The board voted to do so soon afterward.

Bishop beat out a crowded field to win a Republican primary in May. He’s served for three terms in the North Carolina state legislature and is known for his efforts sponsoring the state’s “bathroom bill,” which barred transgender individuals from using a bathroom that aligned with their gender identity. Bishop, who tied himself closely to Trump during the election, had also previously garnered pushback for a financial contribution he made to Gab, a social network frequented by white nationalists.

As an indicator of how close and important the race was, both Trump and Vice President Mike Pence held a rally in North Carolina on Bishop’s behalf this week.

Scandal aside, this special election offers a glimpse of what both parties could expect next year.

North Carolina’s Ninth District is home to exactly the kind of suburban voters who rejected the Republican Party in favor of more moderate Democrats during the 2018 midterms. If Democrats want to expand their House majority next November they will need to win other districts similar to this one. The closeness of the election results in North Carolina suggest that Republicans could have a pretty big fight ahead of them.

As CNN’s Harry Enten pointed out, the district Bishop won went for both Trump and Mitt Romney by 12 points in 2016 and 2012, respectively. Bishop’s victory over McCready, which was much closer than that, is a sign of how much the district’s voters have shifted.

It’s a dynamic that could be taking place in many other districts and it’s one that signals alarm for Republicans writ large going into the 2020 presidential election.

The Trump administration will start sending migrants back to Guatemala under a new rule
New unemployment filings are so high only the Great Depression compares
Montana’s Senate race was supposed to be easy for Republicans. It’s a dead heat.
I was always terrified of wasting time. A cancer diagnosis made me reconsider.
Facebook and Twitter suspend Trump’s accounts after Capitol insurrection
Asked directly, Putin does not deny possessing “compromising material” on Trump