Republicans in a US territory just legalized marijuana 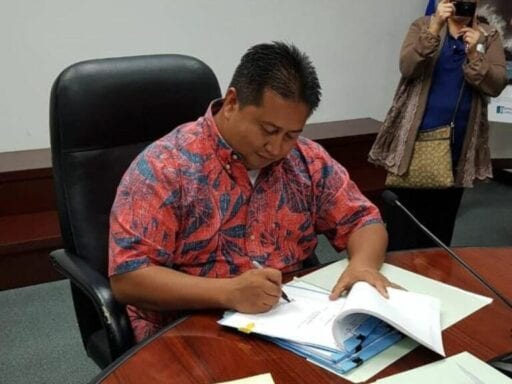 The Northern Mariana Islands’ legislature is the first in the US to legalize marijuana sales.

The Northern Mariana Islands, a US territory in the Pacific Ocean, just became the first American jurisdiction to legalize the sales of marijuana through a legislature. And it did so with the approval of a Republican-controlled government.

Gov. Ralph Torres (R), who oversees the island territory of around 52,000 people, signed the bill on Friday, following its approval by the Republican-controlled House and Senate. The new law not only allows adults 21 and older to legally possess marijuana, but it will foster the creation of a fully legal marijuana market, overseen by government regulators.

Earlier this year, Vermont became the first state to legalize marijuana through a legislature instead of a ballot initiative. (Notably, a Republican governor also signed that bill into law.) But Vermont’s legislation only legalized marijuana possession, not sales — meaning the Northern Mariana Islands is ahead of all states in this regard.

According to marijuana legalization activist Tom Angell, “The territory is also the first US jurisdiction to go from having cannabis totally illegal to allowing recreational use without first having a medical marijuana program.”

“Today, our people made history,” Gov. Torres said in a statement. “We took a stand to legalize marijuana in the [Commonwealth of the Northern Mariana Islands] for recreational, medical, and commercial use.”

Nine states and Washington, DC, have legalized recreational marijuana at some capacity. Legislatures in other states, such as New York and New Jersey, are also considering measures that would fully legalize marijuana sales, but such proposals have not moved forward yet.

Marijuana remains illegal at the federal level, which applies in the Northern Mariana Islands. But the federal government has by and large taken a hands-off approach to states and other jurisdictions legalizing marijuana, despite Attorney General Jeff Sessions’s opposition to the policy change.

Supporters of legalization argue that it eliminates the harms of marijuana prohibition: the hundreds of thousands of arrests around the US, the racial disparities behind those arrests, and the billions of dollars that flow from the black market for illicit marijuana to drug cartels that then use the money for violent operations around the world. All of this, legalization advocates say, will outweigh any of the potential downsides — such as increased cannabis use — that might come with legalization.

Opponents, meanwhile, claim that legalization will enable a huge marijuana industry that will market the drug irresponsibly. They point to America’s experiences with the alcohol and tobacco industries in particular, which have built their financial empires in large part on some of the heaviest consumers of their products. This could result in far more people using pot, even if it leads to negative health consequences.

Supporters seem to be winning out. So far, 2018 has been a watershed year for pot legalization, from Canada becoming the first wealthy nation to legalize marijuana to California opening the world’s largest cannabis market. The Northern Mariana Islands’ decision keeps that momentum going.

Shopping has become a political act. Here’s how it happened.
Vox Sentences: Testimony, Take 2
Dave Chappelle’s Netflix special Sticks & Stones targets Michael Jackson’s accusers, #MeToo, and can...
82-year-old Glenda Jackson’s King Lear is towering. But she can’t rescue a bungled show.
The most important part of the Democrats’ impeachment resolution
The 2020 Grammys kicked off with a Kobe Bryant tribute from Alicia Keys and Boyz II Men