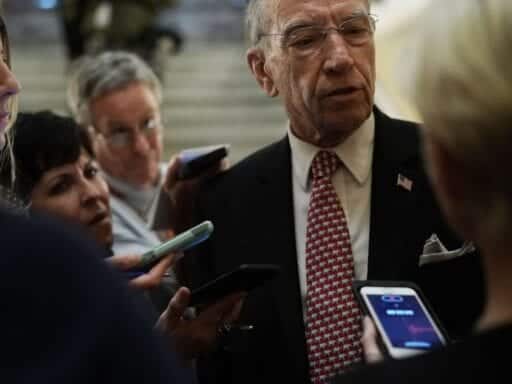 The Judiciary Committee is considering a nominee with no backing from either of his home state senators.

Senate Republicans have made yet another unusual procedural move in an effort to jam through more judicial nominees, according to the top Democrat on the Senate Judiciary Committee.

Not only did Judiciary Chair Chuck Grassley hold a confirmation hearing for a slate of nominees this week — even though the Senate is in recess and not a single Democratic senator was in attendance — the panel also considered a Ninth Circuit pick who doesn’t have the explicit approval of either of his home state senators.

That approval is typically conveyed via what’s known as a “blue slip.” It isn’t required to move a nomination forward, but it is one of the rare courtesies typically given to home state senators. If a senator doesn’t give approval — it’s previously been considered poor form to advance the nominee to the confirmation hearing part of the process.

That’s exactly what happened, however, with Ninth Circuit nominee Eric Miller, someone who multiple activist groups have cited as controversial for previous positions he’s taken regarding Native American tribal sovereignty. He has not gotten blue slip backing from either Sens. Patty Murray or Maria Cantwell, the Democratic lawmakers who represent Washington, where Miller is currently working at law firm Perkins Coie.

Despite Miller’s lack of support, however, Republicans granted him a confirmation hearing. Democrats are furious.

“This is just the second nominee in history advanced over the objection of both home-state senators,” Sen. Dianne Feinstein (D-CA), the top Judiciary Democrat, said. “Sens. Cantwell and Murray have made clear they were not consulted on this nomination, which bypassed the bipartisan process in their state.”

Democrats have also noted that developments like this point to a larger and more troubling theme: In eroding the weight that’s given to the “blue slip,” Republicans are continuing to dilute the means that the minority has to register its opposition.

During the Obama administration, Grassley maintained the practice of honoring blue slips, when evaluating federal judges, according to Sen. Patrick Leahy (D-VT) — a former Judiciary chair himself. If blue slips were returned with favorable comments by both of a nominee’s home state senators, that indicated support. If they were withheld, however, that signaled opposition. As the practice went, when blue slips were withheld, nominees did not receive a confirmation hearing.

Grassley has pushed back on this characterization, however, and argued that he’s employed the same approach across both the Trump and Obama administrations. Historically, different Judiciary chairs have also treated blue slips differently — with many holding hearings even if nominees didn’t have full home state senator support — a Grassley spokesperson added.

As Vox’s Dylan Matthews has reported, Democrats, including Joe Biden when he was Senate Judiciary Chair, have previously interpreted blue slips more as guidance about certain nominees than the deciding factor in whether that person proceeds.

Blue slips have been broadly respected for the feedback they offer in recent years, however. “Last Congress, no judicial nominee received a hearing without both home-state senators returning positive blue slips,” Leahy noted during a floor speech earlier this year.

He also indicated that he followed this practice when Democrats had control of both the Senate and the presidency during the earlier years of Obama’s White House tenure, adding that Republicans were the ones who emphasized the need to respect this tradition, at the time.

“When I was chairman of the Judiciary Committee at the start of the Obama administration, every single Senate Republican signed a letter making the case for the importance of this tradition, and requesting that it be respected during the new administration,” he said.

There has, in fact, been a sharp shift between how things were handled by senators between the Obama and Trump administrations.

Senate Majority Leader Mitch McConnell indicated last October that he was comfortable weakening what blue slips represented, a departure from how things were handled under Obama. McConnell signaled that “their withholding would be taken an indication of how a home state senator will vote, but not kill the nomination,” Matthews writes.

McConnell’s office quickly walked back those remarks, but Grassley’s recent moves suggests that they are, in fact, indicative of how Republicans intend to approach this practice.

Democrats no longer have filibuster rules to block judicial nominees, so the watering down of the “blue slip” rule means they’re left with fewer and fewer forms of recourse to stop the appointment of objectionable judges.

A slew of Trump nominees have run into blue slip troubles

All this back-and-forth over blue slips wouldn’t matter so much if so many Trump judicial nominees hadn’t already prompted Democratic concerns.

In addition to Miller, Ryan Bounds — a Ninth Circuit nominee who was ultimately withdrawn over concerns about his past racist writings — was the first to ever receive a confirmation hearing despite a lack of support from both of his senators.

Others including David Stras, David Porter, and Michael Brennan have already been confirmed for various judgeships with just one blue slip from their respective states.

Republicans’ consideration of Miller — even after Bounds’s nomination failed — marks just how willing the party is to do whatever it takes to fill judicial vacancies, Democrats say.

With McConnell laser-focused on confirming more judges in the months to come, Democrats can only expect more breakdowns of norms on this front.