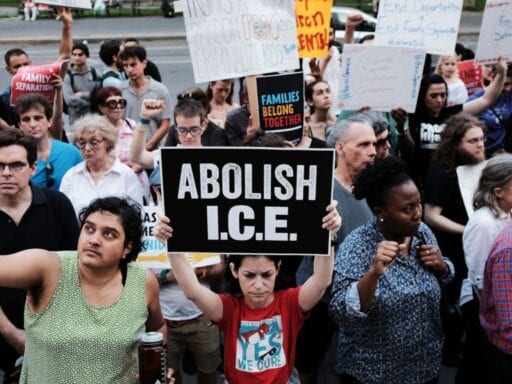 Meanwhile, most Americans have an unfavorable view of ICE.

These two charts from the Pew Research Center show the public’s overall view of a range of agencies as well as the partisan divides in perception.

ICE’s overall numbers are terrible due to its extreme unpopularity with Democrats.

But note that while the Republican turn against the FBI hasn’t been quite as strong, Trump has successfully created a situation in which the GOP rank and file views the FBI as on par with the IRS and worse the Environmental Protection Agency.

Needless to say, things looked very different in the recent past when both Republicans and Democrats expressed positive feelings about the FBI.

The symmetrical partisanship here is a reminder that we are all fundamentally human on some level.

But it’s also worth paying attention to the non-symmetrical aspect of this. For all the hand-wringing articles that have been written about whether “Abolish ICE” is going to kill Democrats with swing voters, the political peril of Trump’s constant attacks on the FBI seems larger.

The FBI is a much older agency with a much more entrenched role in American life, and Americans have primarily favorable views of the FBI notwithstanding a substantial legacy of FBI misconduct. Trump is shifting perceptions fairly rapidly, but it’s much harder to move the needle on the FBI than it is on ICE. ICE has only existed for about 15 years, and there are no famous movies or TV shows about heroic ICE agents. Normal people’s only real exposure to ICE is present-day political controversies in which its primary role is to serve as the face of an unpopular president’s unpopular immigration policy.

Why brands are weighing in on the Capitol insurrection
The problem with Joe Biden’s Republican “epiphany” theory of bipartisanship
How “abolish ICE” helped bring abolitionist ideas into the mainstream
The incredibly damning Ukraine texts from State Department officials, explained
How small businesses can get money from the stimulus package
A new House bill would bar companies from using nondisclosure agreements to hide harassment