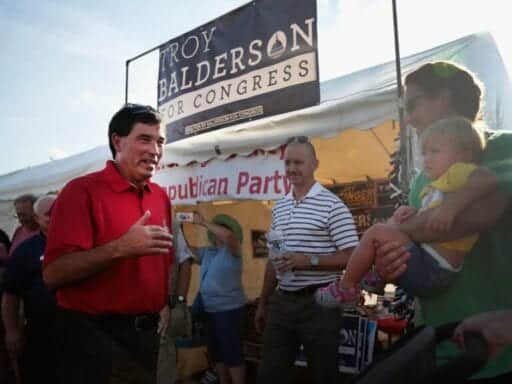 Ohio’s special election was another test of the Republicans’ tax bill messaging.

If Republican’s tax law was designed to win a specific district in America, it would be somewhere like Ohio’s 12th Congressional District — the state’s wealthiest district, which spans Columbus’s conservative suburbs.

The average household income in Ohio’s 12th District is more than $90,000, more than 40 percent of the residents have a college degree, and a Republican has held the seat since the 1980s. The district’s most recent representative, Pat Tiberi, who left in the middle of his term to take a lucrative business lobbying job, was one of the architects of Republican’s tax bill — a law that gave sweeping tax breaks to corporations and wealthy Americans.

Yet on Tuesday, the special election to fill Tiberi’s seat is proving to be surprisingly competitive. Democrat Danny O’Connor is polling within a couple of points of Republican Troy Balderson in a race that is beginning to look a lot like Republican election losses from earlier this year.

And Republicans, who have been adamant that talking about a booming economy will save them in the 2018 midterms, seem to have abandoned touting their tax cuts altogether. Instead they’re turning to the Trump playbook: Don’t talk about the tax bill, and stoke the culture wars.

Over the weekend, President Donald Trump stumped for Balderson at a rally in the district, warning of a Democrat-run nation with “crime all over the place. You’re going to have people pouring across the border,” Trump said. Pro-Balderson ads have pivoted from the economy to attacking O’Connor as “Dishonest Danny” and “Dangerous Danny” — a Nancy Pelosi-loving liberal who will block Trump’s border wall.

Just months away from the 2018 midterm elections, the special election in Ohio’s 12th serves as another test of Republicans’ messaging strategy. It’s becoming increasingly clear that their one major legislative accomplishment of the year — tax cuts — doesn’t seem to be enough to win elections. And Tuesday might prove that a culture war against liberals might not be enough, either.

In OH-12, Republicans are making tax cuts into a culture war

This race started the way you would think a race in an R+7 district in wealthy conservative suburbs would start: Balderson was talking about how great the economy is doing under Republican leadership.

It reflected a 2018 message Republicans crafted in Washington, one that touts 4.1 percent GDP growth and lowering unemployment rates.

But then the race began to tighten and Republicans went into emergency mode. The tax bill was dropped in favor of attack ads against O’Connor’s liberal record, the Washington Post’s Dave Weigel reported:

Since July 16, shortly after the start of early voting for the Aug. 7 special election, a Republican ad about the tax cut has been taken off the air, replaced by one that makes only a glancing mention of it. The party’s ads are focusing more on Democratic nominee Danny O’Connor — his résumé, his political affiliations and his donations — as Democrats fold the tax cut into their own messaging.

Since then, Balderson’s message has been one of fear: If Pelosi-tied O’Connor goes to Washington, the country will descend into crime and require higher taxes to support the illegal immigrants pouring in across liberals’ open borders. O’Connor has said he thinks the Democratic Party needs new leadership, following Rep. Conor Lamb’s playbook in Pennsylvania, distancing himself from Pelosi.

Republican groups have gone all in on Balderson, worried what another upset special election loss will mean for their chances in November. They’ve outspent O’Connor fivefold. The Republican-aligned Congressional Leadership fund has spent nearly $1.8 million to get Balderson over the top.

Meanwhile, talk of the tax bill is coming from O’Connor, the Democrat.

“Troy Balderson supports a corporate tax giveaway that racks up $2 trillion in debt, forcing massive tax hikes on our kids or deep cuts to Social Security and Medicare,” a narrator says in one of O’Connor’s ads. In another ad, O’Connor’s campaign says the GOP tax bill could mean cuts to Medicare and Social Security down the line.

Republicans have turned to this emergency playbook before, and it hasn’t worked.

Republicans have been faced with a dilemma this year: their list of major legislative accomplishments is shorter than they anticipated. They’ve got tax cuts and a conservative Supreme Court justice — and the tax plan is becoming increasingly less popular.

Republicans had an early test of their 2018 messaging in early March. A special election in Pennsylvania’s 18th District — the first after Trump signed the GOP tax cuts into law — was supposed to be a safe Republican race. It was a rural, very white district that Trump had won by 20 points. In spite of all that, Democrat Conor Lamb prevailed.

Republicans “backpedaled into cultural issues, and it looked desperate,” conservative pundit Guy Benson told me after Republicans’ loss in Pennsylvania. But that race wasn’t an isolated case — and the OH-12 special election is looking eerily similar.

Republican gubernatorial candidate Ed Gillespie failed to mobilize GOP voters in Virginia last November, with campaign ads that tried to pick up on the white supremacist rally in Charlottesville, Virginia, and gang violence. Democrat Ralph Northam’s win was in part attributable to a notable turnout of African-American voters.

Of course, this strategy has had some successes: The primaries are rife with nativist sentiment. Kelli Ward, the far-right senatorial candidate in Arizona, ousted incumbent Sen. Jeff Flake from the Republican primary race with a Trumpian “America First” message only to be challenged by Joe Arpaio, the infamous former sheriff who called for detaining people based only on suspicions of their immigration status.

But it’s not at all clear this will be enough to ward off the so-called “blue wave.” What animates a Republican base might only set up the party for failure against energized Democrats.

India’s risky Kashmir power grab, explained
The rise in murders in American cities, explained
An expert says Trump’s threat to revoke clearances would “set back the entire security establishment...
Mike Bloomberg’s record-breaking ad campaign will be run on Facebook by one of its former top execut...
The Thai boys cave rescue: what we know
Lindsey Graham seethes in Kavanaugh hearing: “This is the most unethical sham”