Republicans revive one of Trump’s most notorious immigration lies 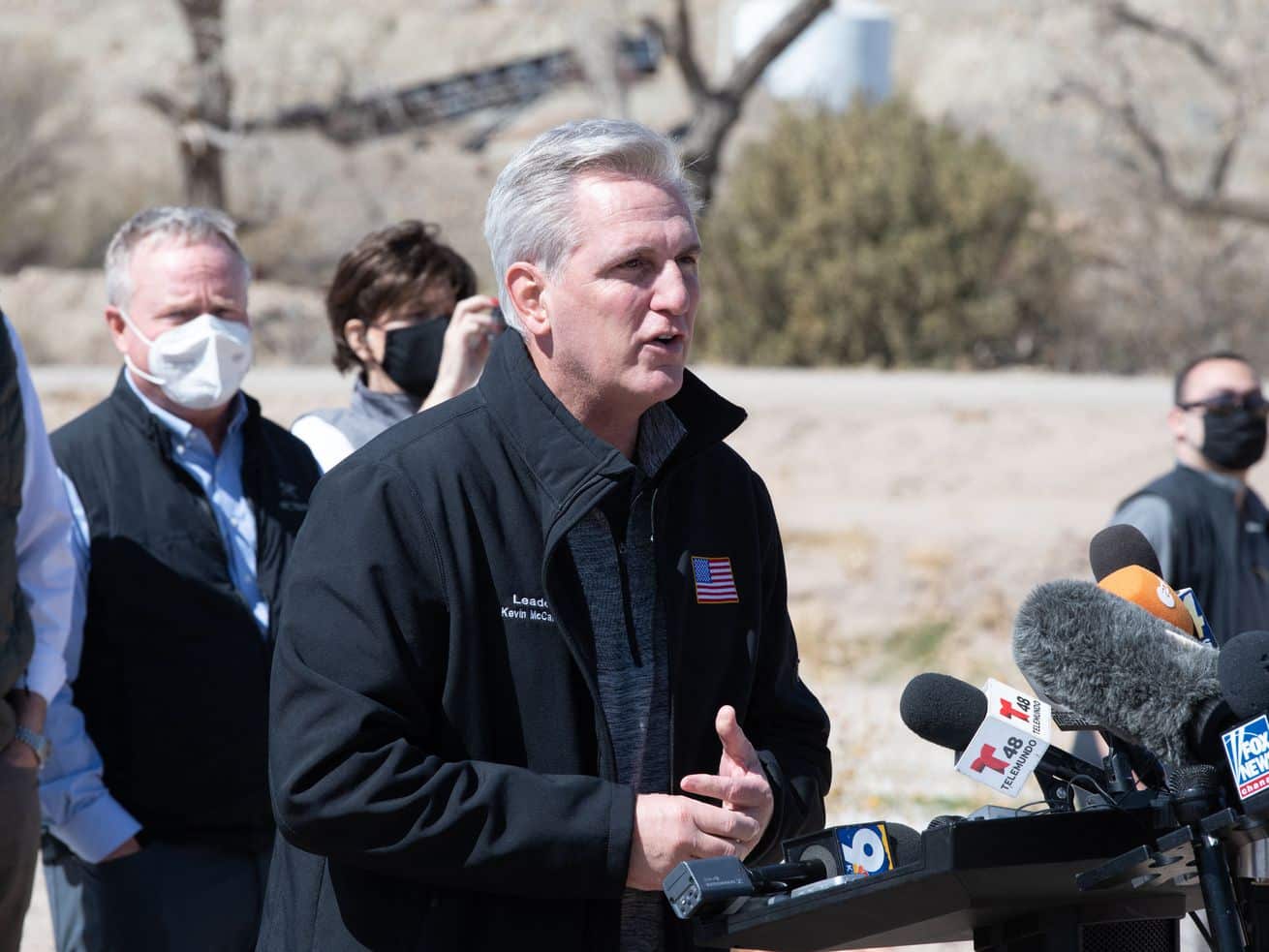 On the heels of President Joe Biden signing a $1.9 trillion Covid-19 relief bill that’s very popular with the American public, if not with GOP members of Congress, Republicans have developed a new line of attack: that the president is not only turning a blind eye to a crisis at the US-Mexico border created by his efforts to roll back Donald Trump’s draconian immigration policies, but that Biden is ignoring a possible terror threat.

To hammer this home, a group of House Republicans led by House Minority Leader Kevin McCarthy (R-CA) traveled to the southern border on Monday and held a press event where McCarthy made a scary claim.

Citing a conversation he had with Border Patrol agents, McCarthy said recent migrants are “not just people from Mexico or Honduras or El Salvador. They’re now finding people from Yemen, Iran, Turkey. People on the terrorist watch list they are catching, and they’re rushing in all at once.”

McCarthy’s trying to get people to believe that Biden is asleep at the wheel as terrorists infiltrate the country.

McCarthy claims people on “the terrorist watch list” from “Yemen, Iran, and Turkey” are being caught coming across the southern border pic.twitter.com/b6ZlXkX9df

Later Tuesday, Rep. Ruben Gallego (D-AZ), chair of the House committee on intelligence and special operations, tweeted in response to McCarthy’s comments, “Weird as the Chairman of the subcommittee on Intelligence and Special Operations and a border state member of Congress haven’t heard anything about this. Gonna ask for a briefing. Pretty sure he is either wrong or lying.”

Gallego went on to call McCarthy’s bluff by asking him to hold a classified briefing where he could share his information about terrorists crossing the border.

“Hi @GOPLeader I have the same security clearance as you do,” Gallego wrote. “Can you have your office arrange for a classified briefing for members to see where this info derived from?”

Hi @GOPLeader I have have the same security clearance as you do. Can you have your office arrange for a classified briefing for members to see where this info derived from? https://t.co/retrzeUPxV

US Customs and Border Protection (CBP) did not immediately respond to an email from Vox seeking comment on what evidence, if any, exists for McCarthy’s claim. But he wasn’t the only Republican making it. On Tuesday morning, another Republican who went to the border, Rep. John Katko (R-NY), went on Fox News and spread the same rumor and innuendo.

“They said they’ve seized not just people from Central and South America, but even people from Yemen and places in the Middle East that are terrorist hotbeds,” he continued.

Rep. John Katko (R) is on Fox News spreading rumor and innuendo that terrorists are crossing the southern border. There is no evidence this is true. pic.twitter.com/ioIbnIwIsv

Unsurprisingly, Fox News anchors didn’t press Katko for any information on who the border agent with this intelligence is, or for any evidence to back up his talking point, which has been a major one on Fox News since the border press event. If past is precedent, evidence may not exist, because Republicans have a long history of spreading misinformation about terrorists crossing the border.

Republicans are reviving one of Trump’s most notorious lies

While he was in office, Trump used fact-free claims about terrorists trying to cross the southern border to sensationalize the risks presented by immigration policies that fell short of sealing it off with a spike-topped wall.

In January 2019, for instance, Trump posted a quickly debunked tweet alleging people from Muslim-majority countries are crossing the border with bad intentions, and leaving prayer rugs behind. (The prayer-rug-at-the-border myth dates back to at least 2014, when it first appeared on Breitbart.)

As recently as this January, Trump claimed “we have terrorists from the Middle East coming into our country through the southern border.”

Not only is there no evidence of this, but Trump’s own State Department debunked it. From the Washington Post:

In reports issued during the Trump administration, the State Department said that there was “no credible evidence indicating that international terrorist groups have established bases in Mexico, worked with Mexican drug cartels, or sent operatives via Mexico into the United States” and that “there have been no cases of terrorist groups exploiting these gaps to move operations through the region.”

The thing is, there’s a real problem at the southern border that Republicans could message on. But that they can’t help but sensationalize it indicates they’re only really interested in scoring cheap political points.

There’s a real problem at the border, but Republicans aren’t engaging in good faith

Trump’s baseless January 2019 tweet about prayer rugs came amid the government shutdown he instigated as part of a failed effort to strongarm Congress into funding his border wall. Now, 26 months later, Republicans are now using a similar lie to attack Biden, who has argued for treating undocumented immigrants and asylum-seekers with more humanity than Trump did.

That’s not to say that Biden’s handling of the situation at the southern border is above reproach. As my colleague Nicole Narea detailed Monday, the number of children currently being detained at CBP temporary holding facilities is at a record high, and they are being held longer than the law allows for. CBS News has reported the children are being kept in overcrowded, “jail-like stations unfit to house minors.”

The Biden administration has ordered FEMA to the border to help officials manage undocumented minors, but has been struggling to develop immigration policies that balance humanitarian concerns with the reality that the government has limited resources to deal with the flow of people that has been steadily arriving at the southern border for years now. The situation appears as if it will only get more difficult: Tuesday, Homeland Security Secretary Alejandro Mayorkas said, “We are on pace to encounter more individuals on the southwest border than we have in the last 20 years.”

Even Democrats like Rep. Henry Cuellar, whose Texas district is on the border, say Biden needs to do more to establish control.

“The Republicans will turn around and use this for a political weapon against Democrats — that we’re weak on the border, we’re not doing enough, we’re letting everybody in,” Cuellar told the Washington Post. “I’ve been warning the party and the administration: Don’t let this get out of hand, because all you’re going to do is you’re going to give Republicans an issue.”

This crisis is not a new one, and there are no simple, ready-made solutions. But instead of engaging with that reality soberly and constructively, Republicans like McCarthy appear to be lying — and getting help from uncritical Fox News coverage to try to terrify voters into turning on Biden.

Drug overdose deaths fell in 2018 — but were still near record highs
The connections between Donald Trump, Harvey Weinstein, and the National Enquirer, explained
Trump’s executive order to stop issuing green cards temporarily, explained
George Bush is only for now
Everyone in the White House cluster who’s said they tested positive for the coronavirus
Live results for Tuesday’s Arizona primaries