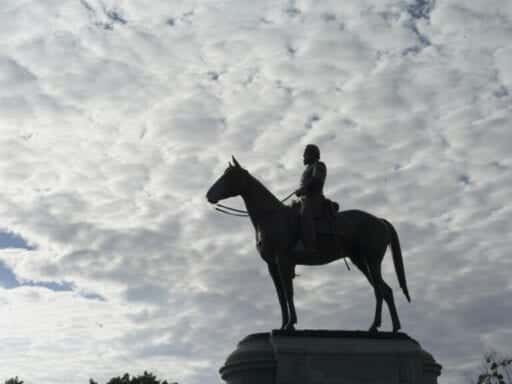 Since 2016, the Southern Poverty Law Center has added 237 more memorials to its database.

Three years ago, in the days after a white supremacist murdered nine black men and women worshipping at a church in Charleston, South Carolina, cities and states pushed a new effort to remove Confederate monuments and memorials. But this effort, which grew after a white supremacist rally and the death of a counterprotester in Charlottesville, Virginia, last year, has led to a new realization: More Confederate memorials are being discovered faster than they can be removed.

That is one of the big takeaways from an updated report on Confederate symbols published by the Southern Poverty Law Center. The report notes that while some 113 Confederate memorials have been removed or changed in the years since the massacre in Charleston, some 1,740 Confederate memorials (a grouping that includes public monuments, the names of schools, counties, and cities, and local holidays commemorating the Confederacy) remain in places across the country. That’s 237 more than the group was aware of in 2016, when it documented the existence of roughly 1,500 memorials.

“As a consequence of the national reflection that began in Charleston, the myths and revisionist history surrounding the Confederacy may be losing their grip in the South,” the report authors note. “Yet, for the most part, the symbols remain.”

The SPLC notes that the issue is not entirely due to new monuments being constructed, although it is worth noting that some 44 Confederate memorials have been created since 2000, popping up in places like Delaware, which was not a Confederate state.

It gets at a broader problem that goes beyond Confederate memorials. In recent years, America has been locked in a debate about how best to acknowledge its history of racial discrimination and violence, a conversation that has largely focused on the enduring legacy of slavery and how the ideals of white supremacy it captured would influence things like lynching, Jim Crow, and mass incarceration. What this new report about the symbols of the Confederacy shows is that as a nation, we’re still learning just how deeply that history has been entrenched.

When white nationalists gathered in Charlottesville, Virginia, last summer to protest the removal of a monument of Confederate Gen. Robert E. Lee, they were fighting to preserve a monument that, as Vox’s Jane Coaston notes, was dedicated in 1924, nearly 60 years after the end of the Civil War.

The Southern Poverty Law Center report shows that many more symbols remain: There are some 772 public monuments, more than 100 public schools, 80 cities and counties, and 10 military bases that memorialize members of the Confederacy. Five states still have paid holidays that commemorate the Confederacy or its leaders.

The report adds a new element to ongoing debates about Confederate monuments and their place in current society. These days, the monuments not only play a role in political contests in states like Virginia, where former gubernatorial candidate and current Republican Senate nominee Corey Stewart has made preserving the monuments part of his political pitch to voters, but have even come to influence national politics, with the monuments being strongly supported by President Trump.

Supporters of the monuments argue that their removal would amount to an effort to “change history,” regularly framing the Confederacy and the war it fought as being about states’ rights and Southern heritage. But critics of the monuments, a movement most vocally led by black activists, note that this “Lost Cause” framing of history has long ignored that the war was truly fought to preserve slavery, a system of bondage that continues to affect African Americans 150 years after it was abolished.

As with the Lee statue in Charlottesville, the periods when the majority of America’s Confederate monuments were constructed largely align with periods that aimed to push back on racial advancement, whether during the establishment of Jim Crow post-Reconstruction or the civil rights movement of the 1950s and ’60s. “These holidays and memorials weren’t intended to honor the dead; they were meant to terrify the living — especially black Americans,” Coaston wrote earlier this year.

But that isn’t how the Confederacy has been discussed in recent months. Instead, in the wake of last year’s white supremacist rally in Charlottesville, Virginia, President Trump argued that the removal of Confederate statues amounted to “changing history.” Meanwhile, members of his Cabinet and other political appointees continued to speak of the Civil War in ways that show a limited understanding of what happened.

And even as the national conversation about Confederate symbols has largely been driven by coverage of removals of prominent monuments in places like Durham, North Carolina, New Orleans, Baltimore, and Memphis, that coverage can at times hide just how many monuments exist. In seven states, laws prevent local governments from removing monuments, making efforts to remove tributes to the Confederacy that much more difficult.

Civil rights groups and historians have noted that things like the removal of monuments will only address part of the issue when it comes to creating a more complete understanding of the ways slavery and its offshoots shaped America. “Our government, and, to a certain degree, our nation and our culture, has not really acknowledged the trauma of 4 million enslaved people and their descendants,” Karlos Hill, a professor of African and African-American studies at the University of Oklahoma, told me in June. “It hasn’t acknowledged the impact this institution has had on this country and continues to have on this country.”

Why Britney Spears’s fans are convinced she’s being held captive
Trump’s last rally as president was supposed to be about the Georgia runoffs. It wasn’t.
Billie Eilish wins big at her first Grammys with a historic sweep of the top categories
Canadian Prime Minister Justin Trudeau wore brownface to a party in 2001
New “call a senior” programs are sparking unexpected friendships during quarantine
Trump’s State of the Union address: How to watch and what to expect