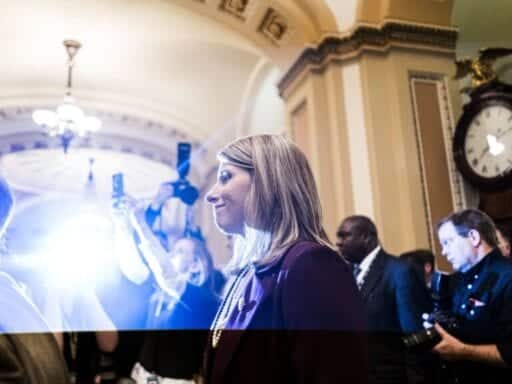 Katie Hill’s time in Congress was brief but trailblazing, for better and for worse.

In March 2017, Hill, then a 29-year-old former director of a homelessness nonprofit, announced her run for California’s 25th congressional district. Her grassroots campaign went on to unseat a carbon-emission defending, gun-loving Republican who even voted to protect the Confederate flag. Hill not only turned the last red seat in Los Angeles County blue, but in a historic midterm, she was also among the 117 women who triumphantly stormed the United States Congress.

Last week, both the conservative site RedState and later the tabloid Daily Mail published intimate photos of Hill and a woman who has been identified as a campaign staffer. Hill has since admitted to being in a relationship with the staffer, but has also said that the images were released without her consent, indicating that it was done by “an abusive husband who seems determined to try to humiliate me.” (Her ex has not issued a statement since the allegations were published.)

In her resignation letter, Hill expresses the anxiety we hear from so many of our clients tormented by the uncertainty of what their abuser will do next. She says she’d “live fearful of what might come next and how much it will hurt” so long as she remained in Congress. Now, of course, Hill must deal not only with the man she says abused her and the profound losses to her career and reputation, but also the entire army of trolls his actions activated.

As our community works to rebuild after the #SaddleridgeFire, we are now faced with an escalating threat in the form of the #TickFire.

That’s why I sent this letter to President Trump and Administrator Gaynor to request their continued support and attention to this matter. ⬇️ pic.twitter.com/3Jm3GKsvuo

Much of the rhetoric about Hill is “she didn’t behave perfectly, but that doesn’t mean she deserves to be revenge-porned.” Let’s be clear: This is not a situation in which a brave subordinate spoke up against a boss who pressured them for sexual favors. Hill admitted that even a consensual relationship with a campaign staffer was inappropriate.

But she is not being investigated for this relationship. Instead, in addition to sharing her intimate images with the world, the RedState reported that texts from her ex-husband accuse her of having an affair with her legislative director, an affair Hill denies but which led to an ethics probe by the House. While RedState and the Daily Mail did not say where they obtained the nude photos and texts, Hill has indicated that they can be traced back to her ex-husband. She told the Washington Post that he engaged in a “smear campaign built around cyber exploitation” and that he enlisted “hateful political operatives” to help — and that is important to note.

In Carrie’s book, Nobody’s Victim: Fighting Psychos, Stalkers, Pervs, & Trolls, she describes how often nonconsensual porn is paired with other stalking, obsessive, and creative behavior. Those who weaponize naked pictures tend to be jealous, retaliatory, and without respect for the law. In some of our cases, the offenders do other creative things: file false police reports, file retaliatory orders of protection, disseminate lies about their partner cheating on them, impersonate on social media, hack their emails to spread their secrets. In multiple cases, offenders have gone so far as to fake their own deaths and impersonate our clients to deliver bomb threats. It’s as if these guys have a playbook and are crowdsourcing ways to destroy a person who dared leave them.

Attacking somebody’s career is the ultimate goal for many offenders. Often, it’s the victim’s rising career that ruptures the relationship. Toppling a powerful woman on her way to the top is the ultimate revenge.

We know because it happened to us.

Carrie was leading the legal team at a nonprofit providing guardianship services to the elderly when her ex claimed to have sent naked pictures and videos of her to judges and made false reports to the NYPD saying she masterminded a sex-for-favors arrangement in Kings County. When he acquired an order of protection based on false allegations, she could have been barred from continuing to work in guardianship.

In our own cases, we had the last laugh — creating meaningful careers from the rubble. But that option is not available to everybody and in Hill’s case it won’t win back her congressional seat or her sexual privacy. Men, on the other hand, can be credibly accused of serial sexual assault and yet still find a place in our boardrooms, on the Supreme Court, and in the Oval Office.

Hill would be well-served taking her case to court. Thanks to the tireless work of the Cyber Civil Rights Initiative (full disclosure: Carrie is an advisory board member), 46 states and DC have criminal revenge porn laws. It’s up to law enforcement whether to pursue the criminal path — and they should! Meanwhile, Hill has remedies that are squarely within her power to initiate and control. California has strong laws for her to sue her alleged abuser and the publications that posted her private materials. Although it may not be useful for Hill, victims in California can file lawsuits using pseudonyms who disseminate their nude images without consent and demand a court order banning further distribution.

Importantly, Hill can sue the distributors for the harm they caused. In her case, the financial damages would be substantial. Although money will be a poor substitute for her, asserting civil remedies against corporations and publishers who’ve done wrong teaches them and their peers a lesson and can deter future similar conduct. The far-right publishers who peddled in her images will say they are protected under the First Amendment or because the images constituted a matter of public concern — i.e. proof she was having an affair. However, we say no way. There’s rarely anything newsworthy about distributing a person’s nude photos. We do not think these kinds of images are intrinsically valuable to the reporting. In Hill’s case, they have only served to humiliate her, incite harassment against her, and ultimately obtain the result they did.

We must change politics by condemning and apprehending those who participated in the publication and dissemination of Hills’ images. We need to protect the political careers of those who’ve been through abuse — because they’re the ones most able to change policies to deter it.

It isn’t just Representative Hill who is paying the price. We are all worse off.