Richard Spencer is an infamous white nationalist. Twitter says he’s not part of a hate group. 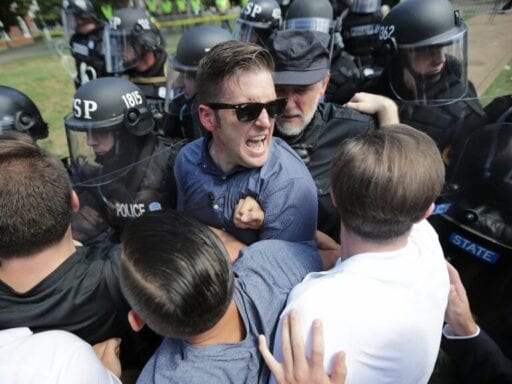 Twitter’s reluctance to ban Spencer has long been a source of controversy.

A Twitter spokesperson said on Tuesday that the company does not consider the known white nationalist Richard Spencer, whose presence on the platform has long been a source of controversy, to have any known affiliations with hate groups.

The comments were made to Vox in response to questions about a Wall Street Journal investigation into Twitter’s decision-making around its content policies. According to the WSJ, Twitter CEO Jack Dorsey allegedly weighs in “at the last minute or after [decisions have been] made” to override decisions made by Twitter staff based on its policies about how to handle accounts that traffic in abuse, harassment, and hate speech.

Specifically, Dorsey is said to have overridden decisions made by Twitter staff by ordering that Spencer be allowed to remain on the site after an initial decision to ban him in 2016. Dorsey also allegedly overrode staff decision-making regarding the controversial Twitter presence of Infowars’ Alex Jones, which has been a major source of controversy for the company over the past six weeks.

Twitter has strenuously denied the WSJ’s findings, characterizing them as “simply incorrect.” Twitter further clarified to Vox that its decision to reinstate Spencer in 2016 “was not an exception for Richard Spencer.” (The company’s stated reason for banning Spencer at the time was that he had too many accounts; Twitter allowed him to choose one account for reinstatement, and provided evidence of policy language supporting this decision that the company claims has been standard “since at least 2012.“)

However, when questioned about why Spencer’s account isn’t considered in violation of Twitter’s hate speech policies, a Twitter spokesperson told Vox that the company has no knowledge of Spencer self-identifying as a member of a hate group, and thus would have no reason to boot him from the platform.

The company’s current hate speech policy, which was expanded in late 2017, expressly forbids any affiliation with hate groups or other groups that promote violence, either online or in real life:

You also may not affiliate with organizations that — whether by their own statements or activity both on and off the platform — use or promote violence against civilians to further their causes.

A Twitter spokesperson told Vox Tuesday that “we have not received reports of content that would result in [Spencer being] suspended,” and that “our enforcement is based on reports being filed for review.”

When asked by Vox why Spencer’s mere existence on the site would not qualify as “content that would result in him being suspended” under the hate group policy, Twitter clarified that it does not have evidence that Spencer belongs to any hate group.

Spencer is a white nationalist who popularized the term “alt-right” as a controversial label that many believe is meant to obfuscate the racist ideology at the movement’s core. He’s widely known for famously getting punched in the face and for speaking at the torch-lit white supremacist rally known as Unite the Right that incited violence and riots in Charlottesville, Virginia, in 2017. The Southern Poverty Law Center (SPLC) has dubbed him an extremist and described him as “one of the country’s most successful young white nationalist leaders.”

More to the point, Spencer is a former board member of the white nationalist group the Mencken Club and the president of a white nationalist “think tank” known as the National Policy Institute, which has been identified as an extremist group by the SPLC and which was founded by a millionaire whose sole goal is the creation of a “white ethnostate.”

In November 2016, Spencer and his National Policy Institute hosted a convention at which he quoted Nazi propaganda in German and shouted a translated version of the Nazi Sieg Heil chant (“Hail Trump! Hail our people! Hail victory!”) to attendees who performed Nazi salutes in response. While there, he dined with “a young blond man who wore a tight shirt and thigh-high shorts in the style of a Nazi youth” and others performing Nazi salutes, and stated, “Let’s party like it’s 1933,” in reference to the year that Adolf Hitler was appointed the German chancellor.

Notably, Twitter banned several accounts associated with the Proud Boys in the days leading up to the 2018 Unite the Right rally. When specifically reminded of Spencer’s role in the 2017 Unite the Right rally, Twitter’s spokesperson told Vox that Spencer’s participation in the event did not equate to affiliation with a particular violent extremist organization.

Twitter seems to be distinguishing between different types of ideologically driven hate groups in an attempt to focus on groups that promote overt violence. But the difference between a group like the Proud Boys and a group like Spencer’s that incites people through use of literal Nazi rhetoric seems like semantic hedging, at best.

The question of how to spur Twitter to examine the evidence that Spencer is a well-affiliated white nationalist seems to be one of exposure and user agitation. Twitter maintains that its enforcement of its rules relies on accounts being flagged for review. But this isn’t always a sure thing. After all, the company arguably expanded its policy against hate groups specifically in response to users’ long-running cry of “ban the Nazis, Jack.” Yet even an ensuing purge of accounts that were in apparent violation of the policy saw no action taken against Spencer or other high-profile white nationalist figures, including Charlottesville Unite the Right rally organizer Jason Kessler, a former Proud Boys member.

If Twitter is, in fact, using a semantic argument to avoid banning Spencer from the platform, it would hardly be the only such exception made for high-profile figures who’ve posted hateful or violent rhetoric on the site.

The WSJ investigation and the information about Spencer come within days of Dorsey’s scheduled September 5 appearance at a Senate Intelligence Committee hearing, alongside Facebook’s Sheryl Sandberg, to testify about potential misuses and abuses of their respective platforms by foreign actors in the lead-up to the midterm elections. The members of the committee are expected to question Dorsey and Sandberg about how ideological biases are dealt with on the platforms, and how their companies’ decisions about censorship are made.

US and Europe have a new normal: Monday’s coronavirus news
Joe Biden got the Covid-19 vaccine on live TV
Why Ms. Marvel is Marvel’s most important creation of the decade
Bernie Sanders’s Joe Rogan experience
Paul Ryan calls for Maxine Waters to apologize: 'There's no place for this'
How you can support Vox