Rick Perry, a key figure in Trump’s dealings with Ukraine, will resign as energy secretary 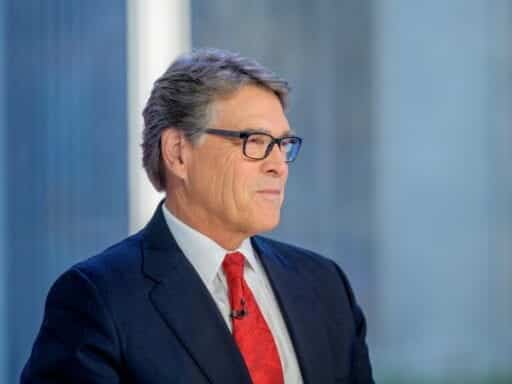 Perry has found himself at the center of a firestorm involving the president and Ukraine.

Energy Secretary Rick Perry, a cabinet member who’s been caught up in the impeachment inquiry of the president over his actions in Ukraine, has officially tendered his resignation. It’s unclear, though, when exactly he plans to leave.

Perry, who’s reportedly been eyeing retirement for months (even before the Ukraine scandal), has served in Trump’s cabinet since 2017 and was long known for his efforts to promote the business interests of the coal industry and undo Obama-era regulations aimed at protecting the environment.

Perry has also recently found himself in the middle of the scandal surrounding the Trump administration’s efforts to pressure Ukrainian President Volodymyr Zelensky to dig up dirt on Hunter Biden, the son of Trump’s 2020 rival, Joe Biden.

Trump effectively threw Perry under the bus on October 4 when the president reportedly told Republican House leaders that he’d only made the now-infamous July 25 phone call to Zelensky at Perry’s request.

”Not a lot of people know this but I didn’t even want to make the call,” Trump said, according to Axios. “The only reason I made the call was because Rick asked me to. Something about an LNG [liquefied natural gas] plant.”

After Perry was singled out, the House has since ramped up its focus on his ties to Ukraine, though he’s repeatedly denied any involvement in pressuring Zelensky to investigate the Bidens.

As Anya van Wagtendonk has written for Vox, Perry’s connections with Ukraine date back to this past spring when he led a US delegation to attend Zelensky’s inauguration:

On May 20, [Perry] led a US delegation to Zelensky’s inauguration that also included Sen. Ron Johnson (R-WI) and Gordon Sondland, the US ambassador to the European Union (the same Sondland who plays a key role in the text message trove House Democrats reviewed and released).

Additionally, he’s engaged in business dealings in the region and reportedly urged Ukrainian officials to shake up the leadership of Naftogaz, a state-owned natural gas company, so the firm would be more likely to engage in business with Trump allies:

Perry reportedly played a role in this — during his trip to Kyiv to attend Zelensky’s inauguration in May, he met privately with Zelensky and other Ukrainian officials, and urged them to fire Naftogaz advisory board members. Per the AP, Perry implied that two Texas businessmen would be good choices for for the new board. He also suggested that a current American representative, a former Obama official, be replaced by someone “reputable in Republican circles.”

These connections have made Perry, who’s previously served as the governor of Texas and was a two-time Republican presidential candidate, a key piece of the House’s impeachment inquiry. In a subpoena to Trump attorney Rudy Giuliani on September 30, House Intelligence Committee leaders requested documents related to Perry’s May trip to Ukraine. They’ve since served Perry with a subpoena on this subject as well, which he has until this Friday to respond to.

“Not once, as God is my witness, not once was a Biden name — not the former vice president, not his son — ever mentioned,” Perry said about his visits to Ukraine during an appearance on the Christian Broadcasting Network on October 4. “Corruption was talked about in the country but it was always a relatively vague term of, you know, the oligarchs and this and that and what have you.”

Deputy Energy Secretary Dan Brouillette, who previously ran public policy for USAA, is set to be Perry’s successor in the top role, according to Politico. It’s still unclear what Perry, the latest casualty of the Trump administration’s rapid-fire turnover, intends to do next.

South Carolina voters unconcerned by Trump talk on tariffs, impact on state
Pete Buttigieg is raising money from Silicon Valley’s billionaires — even as Elizabeth Warren attack...
Thursday evening update: where the presidential race stands
California has 129 million dead trees. That’s a huge wildfire risk.
Why the Pfizer and BioNTech vaccine is a cause for optimism — and skepticism
White Americans are finally talking about racism. Will it translate into action?