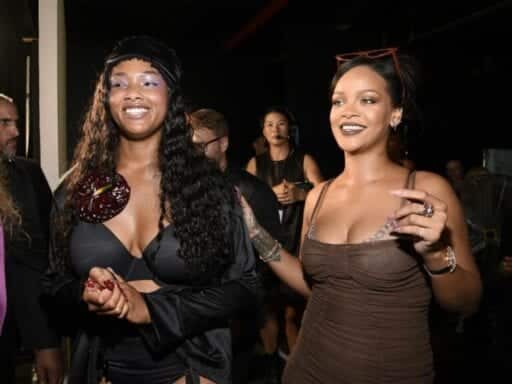 Rihanna’s Savage x Fenty is the polar opposite of Victoria’s Secret.

Makeup is big business, lingerie is big business, and Rihanna is a force of nature rocking both worlds. That much was clear on Wednesday night, when the singer and entrepreneur staged a show for her lingerie line, Savage x Fenty, at New York Fashion Week.

It was a lush, surreally Edenic performance piece, in which dancers and models prowled, whirled, and ran, laughing, across a grassy set strewn with fountains, plants growing under fluorescent lights, and geodesic domes. All 17 minutes, which you can watch on YouTube, are mesmerizing.

Runway shows are an odd tradition. They cost a ton of money, but their appeal is fairly limited to fashion wonks. Much of the clothing doesn’t even go into production. It sometimes seems like a fashion show evaporates the second it’s done.

But this Savage x Fenty presentation is worth paying attention to because Rihanna has emerged as a leader in the world of consumer products, and has made diversity part of her brand’s DNA, rather than deploying it as a one-off marketing tactic. Her Fenty Beauty collection became a smash hit in large part because it launched with 40 shades of foundation — something that should be standard, but isn’t, as many makeup brands ignore women of color when formulating products. Just a few months later, a slew of major makeup brands had followed her lead.

And with this particular fashion show, Rihanna accomplished a few things. She put inclusivity front and center, by hiring a group of performers and models that was diverse in terms of race and, notably, size. And she offered an alternative to the cheery, homogenous vision of female sexuality put forth by the best-known lingerie brand in America, Victoria’s Secret.

For too many years, fashion shows looked like this: A stream of very thin, very young, very white women solemnly marching in a line. Designers and casting directors have been slow to increase diversity on the runway — despite many calls to do so — but recent years have shown progress. Yet keeping in mind fashion’s spotty track record on diversity historically, not just in fashion shows but on magazine covers, some have wondered how sincere the industry really is, particularly when it comes to race.

Representation of different body shapes is a particularly weak point for brands that show at fashion week. For the fall 2017 season, plus-size models accounted for only 0.43 percent of castings, according to a Fashion Spot tally. Even when brands do put plus-size models on the runway, they don’t always manufacture clothing in sizes that those models could buy.

Fashion models tend to be seen as paragons of beauty — a message that consumers absorb, whether they want to or not — so it matters who brands work with. Rihanna’s emphasis on hiring models of many sizes and ethnicities (and a few with pregnant bellies) sends a message.

The runway isn’t everything, however. Though Rihanna launched Savage x Fenty last spring with the message that it would be for people of “all shapes and sizes,” she quickly caught flak from some fans for only going up to a DDD bra. (That’s as far as Victoria’s Secret and Aerie go, too.) Looking at the brand’s website, that still seems to be the case.

With more than 1,100 stores, sales of $5.8 billion last year, and a cast of “angels” that it markets as in-house celebrities, Victoria’s Secret is by far the most visible lingerie brand in America. Every winter it puts on a blowout fashion show, complete with performances by musicians like Bruno Mars, Taylor Swift, and, yes, Rihanna.

Victoria’s Secret is all about a placating, unchallenging brand of sexy. It’s pushup bras, angel wings, glossy curls, long legs, and impossibly toned abs. Though the brand seems to have made some strides on racial diversity with its latest slate of runway models, announced earlier this week, there’s really only one kind of body on display.

Whereas the Victoria’s Secret Fashion Show can feel like an homage to the male gaze, Savage x Fenty’s show expressed something entirely different: A crowd of underwear-clad people communing with each other (leaning on a partner’s shoulders or lunging across the grass in sync) and with themselves. They get weird.

Victoria’s Secret angels take smiling, careful spins at the end of the catwalk; Rihanna’s dancers were sweaty with exertion. Even if no one had showed up to watch the presentation, it felt like that self-sufficient little world would still be pounding with intensity.

And the irrelevance of the audience is very much the point.

“Women should be wearing lingerie for their damn selves,” Rihanna told Vogue in May. “I can only hope to encourage confidence and strength by showing lingerie in another light. You don’t have to stick to one personality with lingerie; it’s fun to play around. You can be cute and playful one week and a black widow next week.”

Shoppers do seem to be tiring of the sameness of Victoria’s Secret. Viewership of its fashion show has been steadily dropping for years, and sales were down 8 percent last year. One brand stealing Victoria’s Secret’s thunder is Aerie, which sells a more attainable kind of beauty with its unpadded bras and unretouched ads.

But it’s not just Victoria’s Secret, and it’s not just lingerie — much of fashion week looked tired in comparison to the freshness and electricity at Savage x Fenty. Indeed, the weakest part of the show was appearances by the models Gigi and Bella Hadid, whose seasoned runway struts seemed stiff and out-of-place next to the dancers around them.

Now, if Savage x Fenty could just extend its sizes.

Michiko Kakutani, esteemed book critic, has finally written a book. It’s about Trump.
Mike Bloomberg says he has the best record on climate change. Does he?
Pennsylvania’s naked ballot problem, explained
What this Oregon county’s “preschool for all” victory means for child care in America
One Good Thing: A very funny show about girlboss feminism
19 books from the 2010s we can’t stop thinking about