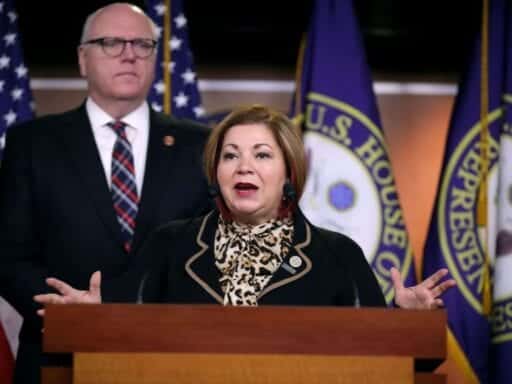 Sánchez announced her bid well before the November midterms.

Sánchez, currently the vice chair of the House Democratic Caucus, officially announced her bid for caucus chair in a letter to her colleagues Tuesday. It’s a signal she wants to move up the leadership ladder, but it comes as little surprise — Sánchez told reporters she was considering running for the position a few weeks ago.

Notably, Sánchez is encouraging her Democratic colleagues to start talking about new leadership now, rather than waiting for the 2018 midterm elections.

“If the American people instill their trust in House Democrats, we must show them that we are ready to lead on the first day,” she wrote in her letter. “A new Congress gives us the opportunity to take a full assessment of what changes we need to make to ensure our success going forward. However, it is clear that if we wait until next year to have these discussions, it will be too late. We must prepare now.”

Sánchez has been calling for new leadership for months, saying House Minority Leader Nancy Pelosi, Whip Steny Hoyer, and Assistant Democratic Leader Jim Clyburn should step down and make way for a younger generation of leaders. She’s joined by more than 20 Democratic candidates running for the House in 2018 who are also calling on Pelosi and current leadership to step aside.

“I do think that having the top three leadership of the same generation — I think it’s time for that generational change,” Sánchez told reporters last week, repeating a sentiment she first expressed last October.

She’s likely to face competition for the chair position. Fellow California Rep. Barbara Lee has also expressed interest in running, and is reaching out to members before deciding whether to announce.

“I’m talking to members right now,” Lee told Vox. “Joe’s been a great chair of the Democratic caucus. He and Linda [Sánchez] have both done a really good job. Now [the position] will be open, so I’m talking to members to see what direction they’d like to see the caucus go in, and if they would think that I could help. They know I’m a coalition-builder.”

Crowley, the current caucus chair, who lost his primary to candidate Alexandria Ocasio-Cortez, praised Sánchez in a statement on Tuesday but stopped short of formally endorsing her.

“Linda Sánchez is a dear friend, a battle-tested member, and a fierce advocate for working families,” Crowley said. “She is an extremely valuable part of the Democratic leadership team and has a bright future in our caucus.”

Italy’s prime minister just resigned. What the heck comes next?
MoviePass briefly stopped working — because it ran out of money
The best $150 I ever spent: Roller skates
Facebook says it legally can’t take down political ads. That’s not true.
Trump and Fox News want to send their hydroxychloroquine hype down the memory hole
Meet Alexandria Ocasio-Cortez, the progressive Latina shaking up politics