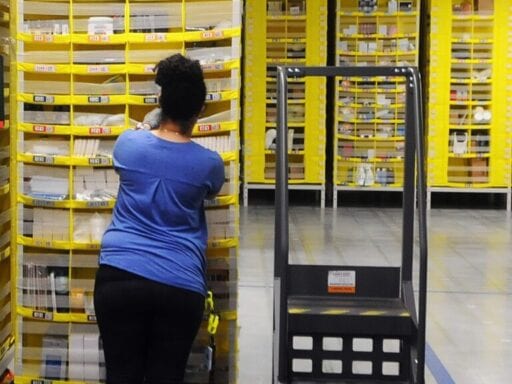 Share
Loading...
A new report from researchers at the University of Illinois shows what the effects of technology on workers will really be | Photo by Paul Hennessy/NurPhoto via Getty Images

A new report says that automation won’t wipe out warehouse jobs in the short term but it may make them worse.

In the past few years, some have wildly speculated about how automation will eliminate wide swathes of the US job market, leaving masses of unemployed, frustrated workers. It’s an issue that’s raised enough concern that 2020 Democratic presidential candidates spent a good amount of time arguing about it in the last debate.

But while it’s unclear how many jobs automation will eventually replace and when it might happen, a new study looks at something more measurable: how new technologies are changing workers’ day-to-day jobs right now.

According to a new report by researchers at the University of Illinois at Chicago that focused on warehouse work automation and was shared exclusively with Recode, emerging technologies aren’t actually going to replace the over 1 million warehouse workers in the US anytime soon. But over the next 10 years, the technology may make their lives harder.

The report shows how technologies are modifying the day-to-day work of people who organize, store, and package physical goods in warehouses. It found that while technology and automation can help workers by reducing the “monotonous and physically strenuous activities” of, say, lifting heavy packages, it could also potentially damage worker health and safety, employee morale, and the rate at which employees are replaced. That’s because tools like self-driving shelving carts, body sensors, and AI-powered management systems are putting pressure on workers to work harder, faster, and under more scrutiny. This is helping boost productivity but could be bad for workers, the report argues.

“The next decade is a story not about job loss, but more so about changes in job quality,” said Beth Gutelius, associate director of the Center for Urban Economic Development at the University of Illinois at Chicago, who co-authored the paper along with colleague Nik Theodore, a professor of urban planning and policy. “Technology has led to workers being pushed harder and also their privacy getting violated.”

For their study, which was was commissioned by the UC Berkeley Labor Center and labor advocacy organization Working Partnerships USA, Gutelius and Theodore interviewed dozens of warehouse operators who make decisions about what kind of technology to use on the shop floor. They asked them what kinds of new tools they’re rolling out for their workers, why they’re doing it, and what impact that’s having on their staff.

The results present some important challenges for anyone thinking about whether technology is helping or harming workers in a vital sector of the US economy.

Warehousing is the work involved in the storage and flow of goods. That includes receiving shipments, sorting them, packaging them, and sending them off to consumers or retail stores. The field employs over a million US workers currently — a figure that’s been increasing steadily for the past few years largely due to the rise of e-commerce. From 2014 to 2017, employment in this field rose 37 percent, the report states, and the US Bureau of Labor Statistics expects employment to continue growing by 21 percent between 2016 and 2026.

Typically, when employment grows, so do wages. But warehouse workers have actually seen their wages go down since 2001, when adjusting for inflation. Today, median hourly wages for these workers range between $13.71 and $16.96 an hour, the report estimates. Meanwhile, unionization rates in the industry have dropped from 14 percent in 1990 to 6 percent in 2018.

Despite how well e-commerce is doing as a sector, these statistics suggest that workers are not sharing in those gains, while doing a job where they’re twice as likely to be injured than in all other private sector occupations, according to the US Bureau of Labor Statistics.

The warehousing workforce is also, compared to the rest of the working population, more likely to be young, male, and Latinx or black. According to the report, workers of color constitute 66 percent of front-line workers in the warehousing industry but just 37 percent of the American labor force — which means that the effects of new technologies will be felt the most by people of color.

These findings paint an important snapshot of the warehouse workforce at a time when the industry is experimenting with technological change to keep up with the unprecedented pace of globalized e-commerce shipping.

“Everything is moving at a faster pace because of Amazon,” said Gutelius, “Because Amazon has said, ‘we can get you something in two days, maybe one day, maybe even faster,’ and that puts pressure on everyone else to perform at the same level.”

That pressure is likely only going to get more intense now that Amazon has introduced free one-day shipping, even on low-cost items, for its Prime Members.

On the one hand, new technology can make life easier for workers whose job it is to sort, pick, and lift items all day.

For example, Amazon’s programmable Kiva robot transports and shelves packages around the warehouse, reducing the need for workers to walk back and forth down the long walkways of a shop floor. Robotic arms can help by picking up packages and reducing the amount of heavy lifting and twisting that workers have to do.

But the report states that even though some new technologies “promise to alleviate the most arduous activities” for workers, they can also contribute to an overall greater workload and more intense supervision.

The report says technology can intensify warehouse work in two main ways. The first is by limiting the amount of human interaction, including in cases where employees can help each other. The second is by allowing the “micromanagement of work tasks at an unprecedented scale.”

That’s because many of these new machines are dissecting workers’ every move — like sensors that measure the time it takes a worker to reach a location where they can pick up an item, scan a label, select a product, and place it in a bin.

These sensors are then linked to algorithmic warehouse management systems on the backend that “track, analyze, and inform workers about their performance” in real time, measuring them against their colleagues and setting more aggressive goals. The unprecedented granularity of this data has the potential to pressure workers to perform tasks more quickly.

“Warehouse workers didn’t have a ton of autonomy to begin with, but this is a whole new level of tracking and management,” said Gutelius.

All this can increase productivity in the short run, but may run workers into the ground in the long run, researchers found.

“The assumption that streamlining processes leads in a linear fashion to greater efficiencies, and thus cost reductions, may be fundamentally flawed,” the report states. “Gains could be counteracted by new health and safety hazards as well as increased employee turnover due to overwork and burnout.”

There’s also a question about data privacy and whether workers have a right to know how the data being collected on them on the job is being used — including if it’s being used to feed the AI behind new autonomous warehouse machines. If that’s happening, it would mean that workers may unwittingly train their own replacements.

“Workers in this country don’t really have rights over the data that is collected about them at work,” said Gutelius. “If we think about the long-run implications of that, the ability to collect data at this granular level could very well be informing the next wave of technological development and robots.”

Another way the industry is putting pressure on workers with new technology is through gamification that pits warehouse workers against each other. Some Amazon warehouse pickers, for example, play a Tetris-like game called MissonRacer, where employees race to fill customer orders through a virtual competition that mirrors their real-life packing rates.

“It pushed us to the limits — and in fact, it pushed me so far as for me to get physically injured on the job,” Guillen told Recode. “I was diagnosed with a hernia at age 23. The algorithms that were in place for us, they made us follow unrealistic rates.”

Ideally, as machines take over the more routine parts of jobs, workers would get upskilled, meaning they would learn new capabilities that would let them do higher-paid work.

That could mean, for example, learning how to maintain and manage the robots on the factory floor, a career path that’s more skilled and potentially stable than working as a picker on the shop floor.

One challenge is that those specialized mechanical jobs are relatively few compared to the more routine shop-floor jobs that are changing (for workers, arguably for the worse).

Another is that many employers don’t own but instead lease the robots that they’re using from third parties — and those third parties are the ones hiring people to train and maintain their equipment.

The report raises questions, not just for employers but also for policymakers, about how to best support workers through these employment transitions. Although technology may be having some negative effects on workers, that could be different with better policies and implementation, Gutelius said.

“This whole process is not inevitable. Even as warehouse operators stand to gain a lot from technological advancements, how these gains are distributed is the question.

“Technology on its own isn’t all good or all bad.”

What you should know about Jack Dorsey’s surprising $1 billion commitment to charity
Brazil’s Jair Bolsonaro gets coronavirus after months of downplaying the pandemic
A demonstrator was shot and a man set on fire in Hong Kong’s protests
Democratic hopes for climate policy may come down to this one weird Senate trick
Primary voters head to the polls in 7 states
Are air fryers worth the hype? Depends who you ask.