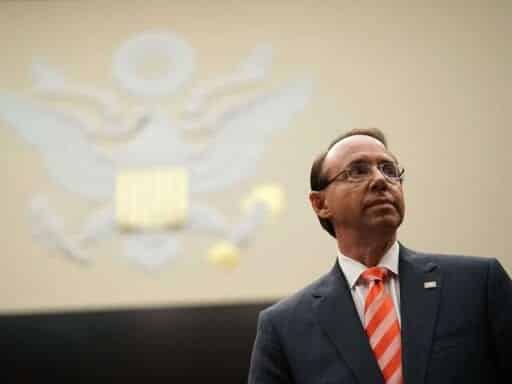 The deputy attorney general also warned against partisan bickering over the latest moves by the special counsel.

In his statement, Rosenstein says he briefed the president. He cautioned the public not to believe leaks about the investigation. And he made a plea to let the special counsel’s investigation play out — urging both parties to recognize the crimes described in the indictments are a clear and dangerous attack on democracy.

“A partisan warfare fueled by modern technology does not fairly reflect the grace, dignity, and unity of the American people,” Rosenstein said Friday. “The blame for election interference belongs to the criminals who commit election interference. We need to work together to hold the perpetrators accountable, and we need to keep moving forward to preserve our values, protect against future interference, and defend America.”

Read the rush transcript of Rosenstein’s full statement below.

Good afternoon. Today a grand jury in the District of Columbia returned an indictment presented by the special counsel’s office. The indictment charges 12 Russian military officers by name for conspiring to interfere with the 2016 presidential election. Eleven of the defendants are charged with conspiring to hack into computers, steal documents, and release those documents with the intent to interfere in the election.

One of those defendants and a 12th Russian military officer are charged with conspiring to infiltrate computers of organizations involved in administering elections, including state boards of election, secretaries of state, and companies that supply software used to administer elections. According to the allegations in the indictment, the defendants work for two units of the main intelligence directorate of the Russian general staff known as the GRU.

First, they used a scheme known as spear phishing, which involves sending misleading e-mail messages and tricking the users into disclosing their passwords and security information.

Second, the defendants hacked into computer networks and installed malicious software that allowed them to spy on users and capture keystrokes, take screenshots, and exfiltrate or remove data from those computers. The defendants accessed e-mail accounts of volunteers and employees of a US presidential campaign, including the campaign chairman starting in March of 2016.

They also hacked into the computer networks of a congressional campaign committee and a national political committee. The defendants covertly monitored the computers and planted hundreds of files containing malicious computer code and stole emails and other documents. The conspirators created fictitious online personas, including D.C. Leaks and Guccifer 2.0. They used those personas to release information, including thousands of stolen emails and other documents beginning in June of 2016. The defendants falsely claimed that D.C. Leaks was a group of American hackers and that Guccifer 2.0 was a lone Romanian hacker. Both were controlled by the Russian GRU.

In addition to releasing documents directly to the public, the defendants transferred stolen documents to another organization that is not identified by name in the indictment, and they used that organization as a pass through to release the documents. They discussed the timing of the release in an attempt to enhance the impact on the election. In an effort to conceal their connections to Russia, the defendants used a network of computers around the world, and they paid for it using cryptocurrencies. The conspirators corresponded with several Americans during the course of the conspiracy through the internet. There’s no allegation in this indictment that the Americans knew they were corresponding with Russian intelligence officers.

In a second related conspiracy, Russian GRU officers hacked the website of a state election board and stole information about 500,000 voters. They also hacked into computers of a company that supplied software used to verify voter registration information. They targeted state and local officials responsible for administering elections, and they sent spear phishing emails to people involved in administering elections, including attaching malicious software.

I want to caution you, the people who speculate about federal investigations usually do not know all of the relevant facts. We do not try cases on television or in congressional hearings. Most anonymous leaks are not from the government officials who are actually conducting these investigations.

We follow the rule of law, which means that we follow procedures, and we reserve judgment. We complete our investigations, and we evaluate all of the relevant evidence before we reach any conclusion. That is how the American people expect their Department of Justice to operate, and that is how our department is going to operate.

The indictment was returned today because prosecutors determined that the evidence was sufficient to present these allegations to a federal grand jury. Our analysis is based solely on the facts, the law, and department of justice policies. I briefed President Trump about these allegations earlier this week. The president is fully aware of the department’s actions today.

In my remarks, I have not identified the victims. When we confront foreign interference in American elections, it’s important for us to avoid thinking politically as Republicans or Democrats and instead to think patriotically as Americans. Our response must not depend on which side was victimized. The internet allows foreign adversaries to attack America in new and unexpected ways. Free and fair elections are always hard fought and contentious.

There will always be adversaries who seek to exacerbate our divisions and try to confuse, divide, and conquer us. So long as we are united in our commitment to the values enshrined in the Constitution, they will not succeed. A partisan warfare fueled by modern technology does not fairly reflect the grace, dignity, and unity of the American people. The blame for election interference belongs to the criminals who commit election interference. We need to work together to hold the perpetrators accountable, and we need to keep moving forward to preserve our values, protect against future interference, and defend America.