Rod Rosenstein on Russian cyberattacks: “It’s what they do every day” 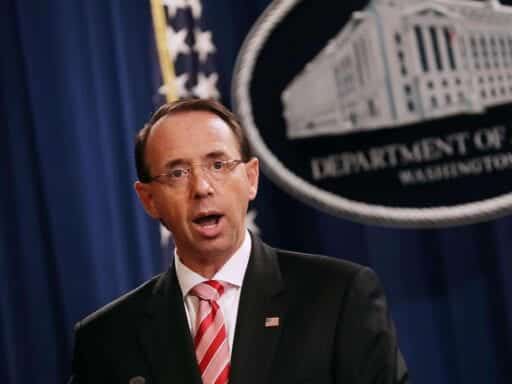 Rosenstein’s remarks coincided with the release of a Department of Justice report on cyber threats.

President Donald Trump doubted Russian meddling in the 2016 election when he stood alongside Russian leader Vladimir Putin in Helsinki, Finland, on Monday. The president has since walked back his comments, but his own administration continues to be clear: The Kremlin interfered in US politics, and it’s probably not done.

Deputy Attorney General Rod Rosenstein released a report from a Department of Justice digital task force just ahead of his speech at the Aspen Security Forum, where he discussed the administration’s efforts in countering cybersecurity threats, including from foreign actors. Russia came up.

“The Russian effort to influence the 2016 election is just one tree in a growing forest, Rosenstein said at the Aspen forum on Thursday. “Focusing merely on a single election misses the point.”

He added: “Russian intelligence officers did not stumble on the idea of hacking American computers and posting misleading messages because they had a free afternoon. It’s what they do every day. Not just attacking America, but other countries as well.”

Rosenstein echoed the director of national intelligence Dan Coats in his recent comments that the threats of cyberattacks from foreign actors are a pressing and ongoing threat. Coats said Thursday, also at the Aspen Security Forum, that it’s “undeniable that the Russians are taking the lead on this.”

Rosenstein gave a basic overview in his speech of some of the threats the US faces, as outlined in the report. But he spent considerable time speaking about foreign actors, and identified what tactics they might use to disrupt American democracy, including attacking election infrastructure, spreading false propaganda, and offering assistance to political campaigns.

As the Washington Post first reported, Rosenstein said the Justice Department would also try to publicly alert the public when disinformation or hacking campaigns take place, a strategy to “neutralize” the threat. “The American people have a right to know if foreign governments are targeting them with propaganda,” he said.

Rosenstein also defended the Mueller indictments of 12 Russian military officers on crimes related to the hacking of leading Democrats’ emails and those in February against 13 Russian nationals and three companies accused of a propaganda campaign.

“Do not underestimate the long arm of American law, or the resolve of American law enforcement,” Rosenstein said to applause. “There are plenty of people who thought they were safely under the protection of foreign governments when they committed crimes against America, but they later find themselves in American prisons.”

Rosenstein, who did not take questions, made it clear where Trump’s own Department of Justice stood on Russia and the threat of cyberwarfare from foreign actors. (The task force report does, too.) But he reiterated remarks he made with Friday’s indictments, saying that countering cyberattacks on America should be beyond politics.

“When we confront foreign interference in American elections it’s important for us to avoid thinking politically as Republicans or Democrats,” Rosenstein said. “And instead to think patriotically as Americans.”

“Our response,” he added, “must not depend on which side was victimized.”