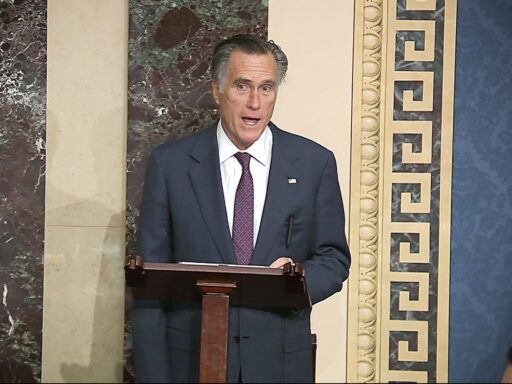 “The best way we could show respect for the voters who were upset is by telling them the truth.”

Sen. Mitt Romney — the only Republican senator to vote to convict President Donald Trump on one impeachment charge in 2020 — condemned the president again Wednesday, after a pro-Trump riot at the US Capitol so unprecedented it kicked off impeachment talk yet again.

Addressing the six senators who continue to promote the fallacy that the November election was stolen from the president and to call for an investigation — including Missouri Sen. Josh Hawley and Texas Sen. Ted Cruz — Romney said that no audit will convince the voters who have refused to accept that Trump lost. He empathized with their position, acknowledging that his own election loss to former President Barack Obama in 2012 was “no fun,” but drew a firm line.

“The best way we could show respect for the voters who were upset is by telling them the truth,” Romney said to applause from his colleagues. “That’s the burden. That’s the duty of leadership.”

Romney: “The best way we can show respect for the voters who were upset is by telling them the truth … President Trump lost.” pic.twitter.com/J0EWMpsebS

The Utah Republican lauded Sens. James Lankford, Kelly Loeffler, Mike Braun, and Steve Daines for withdrawing their objections to the results of the election in light of Wednesday’s insurrection at the Capitol, for which he blamed Trump. That insurrection entailed thousands of protesters, some armed, marching from a speech Trump gave to rallygoers near the White House to the Capitol, eventually storming it, and forcing lawmakers to evacuate and postpone the day’s planned business of certifying the Electoral College vote. As a result, the Senate rejected the objection raised against Arizona’s electoral votes, 93-6.

He also suggested that those objecting to the results had put their personal political ambition ahead of their duty to voters, much like Trump. Both Hawley and Cruz are expected to launch presidential bids in 2024 — though some lawmakers have called for them to resign or face expulsion before then in light of their role in enabling the insurrection at the Capitol.

“We gather due to a selfish man’s injured pride and the outrage of supporters who has deliberately misinformed for the past two months and stirred to action this very morning,” Romney said. “Those who choose to continue to support is a dangerous gambit by objecting to the results of a legitimate democratic election will forever be seen as being complicit in an unprecedented attack against our democracy, fairly or not.”

Other Republican senators broke with the president — Sen. Lindsey Graham, once one of Trump’s strongest allies in the chamber, finally declared “Enough is enough” on Wednesday — but none condemned him in quite such direct terms.

Romney has sided with the president on several key votes across his term. But unlike a number of other Republicans in recent weeks, Romney has not entertained Trump’s unfounded claims of widespread voter fraud in the November election — and at times faced criticism from the Republican base for failing to do so. Earlier this week, he was heckled and confronted by Trump supporters on a flight from Salt Lake City to DC, who chanted “Traitor!” and called on him to resign.

On Wednesday as rioters encircled the Capitol, he yelled at his Republican colleagues in the Senate, “This is what you’ve gotten, guys,” the New York Times reported.

Those who leave home, and those who stay
US military chiefs warn troops against “sedition and insurrection” before Biden inauguration
McDonald’s rolls out meatless Beyond burgers in Canada
Every Massachusetts primary race you should know about, briefly explained
Books to read when you’re feeling low-energy
Jeff Flake explains his last-minute shift on Kavanaugh