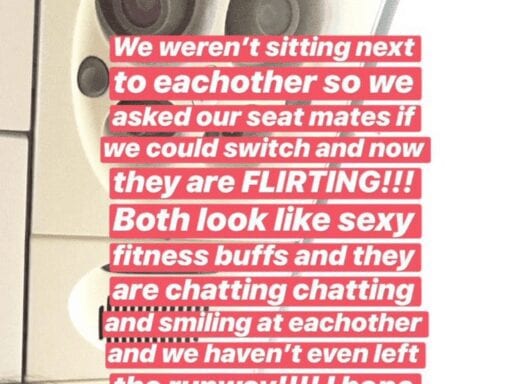 After asking for a job and a movie deal, the woman behind the viral romance is now asking for forgiveness.

After invading a woman’s privacy, asking her followers to identify said woman, and angling for a job at BuzzFeed and a film deal, the woman who documented the phenomenon known as “Plane Bae” wants the world to know she’s sorry.

On June 10, a week after setting the Plane Bae viral phenomenon in motion, Rosey Blair issued a bizarre apology to Helen, the woman whose in-flight flirtation with her seatmate Blair documented without consent.

Blair and Helen switched seats on a flight from New York City to Dallas, and Blair proceeded to take photos of, live-blog, and Instagram the interactions between Helen and her new seatmate, later identified as former professional soccer player Euan Holden, who had no problem being identified and interviewed as the story went viral. But Helen wanted no part of it, declining to be named or interviewed about it on the Today show.

“The last thing I want to do is remove agency and autonomy from another woman,” Blair wrote in her Twitter apology, explaining that the spirit of romance had excited her beyond the point of recognizing the boundaries of privacy. “Helen — to you I offer my services. In whatever way you wish to continue this story — it’s now yours.”

That Blair put this apology out on Twitter and the fact that she didn’t deal with it privately, plus its wording (“I offer my services”), makes the move appear more performative than sincere. Blair wants the public to know she’s sorry as much as she wants Helen to know.

The hollow-seeming nature of this apology stems at least in part from Blair’s behavior in the days after the story went viral. In a now-deleted tweet, Blair tried to parlay Plane Bae into a job at BuzzFeed:

She also tweeted that she was an actress and writer, perhaps trying to float the idea of Plane Bae: The Movie, and hinted that she’d do it all again for some free plane tickets:

But perhaps the most egregious thing Blair did was telling her followers, in a now-deleted tweet, that they could figure out Helen’s identity because “you guys are sneaky” — essentially suggesting they dox the woman. Helen reportedly deactivated her social media and scrubbed herself from the internet after the Plane Bae incident.

In light of this behavior, Blair’s turnaround feels like it was prompted less out of care for her fellow passenger and more in response the backlash she’s faced since the story went viral. Anyway, here’s Blair’s apology:

The odd, growing list of Covid-19 symptoms, explained
A negative Covid-19 test isn’t an all-clear
This week in TikTok: Generations are fake but Gen Z is right
Starbucks hops on the bandwagon and eliminates plastic straws
The key senators to watch for Brett Kavanaugh’s confirmation
The Senate just passed a $480 billion “interim” stimulus bill to tide over small businesses