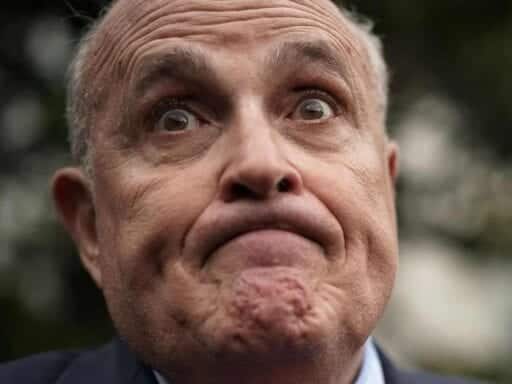 Giuliani says no Americans were involved. The indictment suggests otherwise.

President Donald Trump is in England meeting the queen, leaving it up to his lawyer Rudy Giuliani to break the Twitter silence on special counsel Robert Mueller’s new indictments of 12 Russian spies for hacking the Hillary Clinton campaign and two Democratic organizations in an attempt to sway the 2016 presidential election.

The indictments Rod Rosenstein announced are good news for all Americans. The Russians are nailed. No Americans are involved. Time for Mueller to end this pursuit of the President and say President Trump is completely innocent.

“The indictments Rod Rosenstein announced are good news for all Americans,” Giuliani said. “The Russians are nailed. No Americans are involved. Time for Mueller to end this pursuit of the President and say President Trump is completely innocent.”

Giuliani has been waging a war against Mueller, trying to discredit the investigation as a “witch hunt” and as tainted by bias. But Giuliani’s statement on Friday echoes a strategy used by Trump allies after Mueller indicted 13 Russian nationals and three companies in February: This has nothing to do with the president.

Deputy Attorney General Rod Rosenstein, in announcing the indictments, made clear that the investigation is not over. “I want to caution you, the people who speculate about federal investigations usually do not know all of the relevant facts,” he said.

What’s more, Rosenstein didn’t say no Americans were involved — only that those mentioned in the indictments did not appear to be aware they were communicating with Russian intelligence officials. “The conspirators corresponded with several Americans during the course of the conspiracy through the internet,” Rosenstein said. “There’s no allegation in this indictment that the Americans knew they were corresponding with Russian intelligence officers.”

The White House, in a statement, echoed this point: “Today’s charges include no allegation of knowing involvement by anyone in the campaign that the alleged hacking affected the election result. This is consistent with what we have been saying all along.”

Noticeably absent in the White House response is any condemnation of Russia and the evidence that Kremlin intelligence officials launched a hostile hacking campaign against a US political party in an attempt to interfere in a presidential election.

The US has reported more than 97,000 new Covid-19 cases since the news of Trump’s positive test
Moderna released more Covid-19 vaccine results. They’re very encouraging.
3 of Trump’s signature immigration policies are on the line at the Supreme Court
Reconsidering the US-Saudi relationship
The Parent Trap, Meredith Blake, and the ongoing reclamation of “bitch”
Could a congressional amendment have stopped Trump from striking against Iran?