Rudy Giuliani’s fixers for the Ukraine caper just got arrested 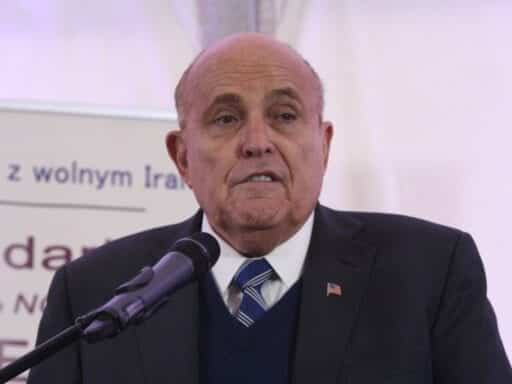 Lev Parnas and Igor Fruman were arrested for campaign finance violations while trying to leave the country.

At nearly every step of Rudy Giuliani’s effort to get the Ukrainian government to investigate Trump’s political rivals, Giuliani has been accompanied by two men often described as his “fixers”: Lev Parnas and Igor Fruman.

But the latest dizzying twist in the unfolding Ukraine scandal is that Parnas and Fruman were arrested Wednesday evening — at Dulles Airport outside Washington, DC, as they were trying to leave the United States with one-way tickets — and charged with campaign finance law violations.

The US Attorney’s Office for the Southern District of New York alleged in the charges that Parnas and Fruman made false disclosures related to hundreds of thousands of dollars in political contributions they made to Republican groups, including the pro-Trump super PAC “America First Action” in 2018.

Prosecutors allege that Parnas and Fruman “sought to advance their personal financial interests and the political interests of at least one Ukrainian government official with whom they were working.” They also allege a scheme to funnel foreign contributions from a Russian businessman to promote a planned recreational marijuana business, in which two other people (who are not involved in the Ukraine scandal) were also charged. You can read the full indictment at this link.

“Campaign finance laws exist for a reason. The American people expect and deserve an election process that has not been corrupted by foreign interests,” FBI official William Sweeney said during a press appearance Thursday. He also confirmed the investigation into Parnas and Fruman was still continuing.

The indictment does not mention Giuliani or directly mention the recent effort to get Ukraine to investigate the Bidens. But there are several ties to the current scandal. Most notably, the indictment references Parnas and Fruman’s effort to force out the US Ambassador to Ukraine, Marie Yovanovitch. Prosecutors claim they did this “at least in part, at the request of one or more Ukrainian government officials.”

More broadly, the charges show how Parnas and Fruman got access to the top levels of Republican politics in the first place: by throwing allegedly illegal campaign contributions around. The very men who Giuliani claimed were helping him investigate the Bidens’ corruption seem to have been corrupt themselves.

Who are Lev Parnas and Igor Fruman?

Both Soviet-born US citizens living in Florida, Parnas and Fruman had a history of shady financial dealings but were little known in political circles. That suddenly changed in 2018 due to the political contributions they have now been criminally charged for.

Specifically, Parnas and Fruman gave $325,000 to America First Action, a super PAC formed to help Republicans in the 2018 midterms with the backing of Trump’s team. They then visited the White House and Mar-a-Lago and got face time with top Republicans like President Trump himself and his son Don Jr. — as Parnas happily documented on social media.

Yet reporters quickly raised questions about the source of these funds and how they were disclosed to the FEC. Parnas and Fruman had created an LLC named “Global Energy Producers” and said the funds were coming from that company, which they claimed was a legitimate energy business.

The indictment alleges that the company was not for real — instead, it was created just around that time “to evade reporting requirements.” In fact, the $325,000 never even touched any account for “Global Energy Producers”; the funds came from a loan Fruman got elsewhere, making it an apparent false disclosure.

Also last year, Parnas met with Rep. Pete Sessions (R-TX), committed to raise money for his imperiled reelection effort, and asked for the Congressman’s help with something: getting the US government to recall the US Ambassador to Ukraine, Marie Yovanovitch. “Parnas’s efforts to remove the Ambassador were conducted, at least in part, at the request of one or more Ukrainian government officials,” the indictment asserts, without elaborating.

Rep. Sessions proved quite compliant. As BuzzFeed News previously reported, Sessions quickly wrote a letter to Secretary of State Mike Pompeo calling for her ouster. “I have received notice from close companions that Ambassador Yovanovitch has spoken privately and repeatedly about her disdain for the current administration,” Sessions wrote, apparently referring to the donors he had just recently met.

Sessions, who is referred to as “Congressman-1” in the indictment, ended up losing reelection, though he is said to be considering running again in a separate, safer Republican district.

Then Parnas and Fruman joined up with Rudy Giuliani

Around late 2018, Parnas and Fruman began working closely with President Trump’s personal lawyer, Rudy Giuliani, in an effort to get Ukraine to investigate the Bidens and other matters.

In Parnas’s telling, he is the one who first heard in late 2018 about allegations from a former prosecutor general of Ukraine, Viktor Shokin. Shokin was privately claiming the US forced him out of his position because he was investigating the gas company Burisma, where Joe Biden’s son Hunter was a board member.

Shokin’s allegations seem to make little sense: The widespread consensus among US and Western officials was that he wasn’t doing enough to investigate corruption, and that that’s why the US ended up urging his ouster. (Even two Republican senators recently said that’s what happened.) But Shokin’s claims certainly seemed like they could be helpful to Donald Trump’s reelection campaign if he ended up facing the Democratic frontrunner, Joe Biden.

So in late 2018, Giuliani started “investigating” the matter. Parnas and Fruman helped him set up calls and meetings with current and former Ukrainian officials, and also accompanied him to discussions about the matter in the US. They seemed to have played a role in getting Ukraine’s then-prosecutor general, Yuriy Lutsenko, to agree to investigate the Bidens.

Meanwhile, Parnas and Fruman had another angle. According to the Associated Press, they wanted to make money off a deal to export US natural gas to Ukraine and hatched a plot to try and oust the current CEO of the state gas company, Naftogaz. All this time, they continued to advocate for Ambassador Yovanovitch’s ouster as well, and the Trump administration finally recalled her in the spring of this year.

Separately, and apparently unrelated to this, Parnas and Fruman were also trying to start a recreational marijuana business, which would be funded by a Russian businessman. The indictment alleges they and two other associates, David Correia and Andrey Kukushkin, planned to illegally steer this Russian businessman’s money into campaign contributions to politicians who they thought would help them get retail marijuana licenses. (“The Business Venture did not come to fruition,” prosecutors write.)

Now Parnas and Fruman are key figures in the whistleblower scandal

After Volodymyr Zelensky won the Ukrainian presidential election in April, Parnas and Fruman needed to get influence over the new regime. Zelensky had risen to fame by playing the president of Ukraine in a television comedy show, so Parnas and Fruman flew to Israel to meet the oligarch who owned the TV station distributing that show.

That oligarch, Ihor Kolomoisky, claims they urged him to help arrange a meeting between Giuliani and Zelensky — and that he didn’t agree. He described Parnas and Fruman to Ukrainian media as “two clowns” who were “milking the bull,” working with Giuliani in “a clear conspiracy against Biden.” Giuliani soon sent an angry tweet about this.

An American analyst describes Kolomoisky as “super dangerous.” The notorious oligarch returned from a long exile and immediately threatened and defamed two Americans, Lev Parnas and Igor Fruman. They are my clients and I have advised them to press charges.

Interestingly, Giuliani described Parnas and Fruman in this tweet as his “clients.” But the exact nature of their relationship hasn’t been made clear. Are Parnas and Fruman paying Giuliani? Are they paying him for legal advice? Are they steering money from other sources to Giuliani? (Remember, Giuliani’s work for Trump is unpaid, so who’s paying the bills for all this work?)

In any case, Trump eventually made his demands clear during his now-infamous call with President Zelensky this July: He wanted Ukrainian investigations into the Bidens and into the origins of the FBI’s Russia probe. And eventually, news broke about a whistleblower complaint about the matter, which spurred Democrats to begin an impeachment inquiry.

Parnas and Fruman were under increasing scrutiny, so they hired John Dowd, who had been Trump’s lawyer in the Mueller probe, as their attorney. Dowd asserted in a letter to Congress that Parnas and Fruman would not in fact cooperate with the investigation.

Now, though, there’s this sudden curveball of Parnas and Fruman’s arrest on campaign finance charges — while they were trying to leave the country, hours after having lunch with Rudy Giuliani at Trump’s Washington, DC, hotel (according to the Wall Street Journal’s Natalie Andrews). Parnas and Fruman are expected to appear in court on Thursday.