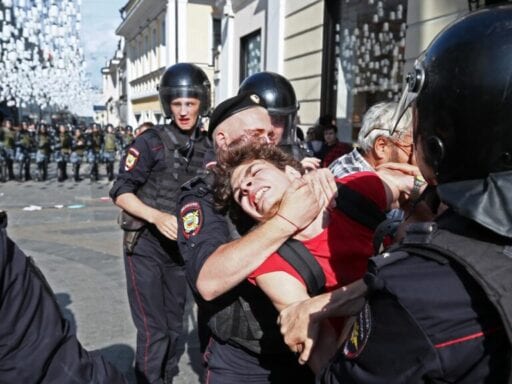 More than 1,300 people were arrested by police during an unsanctioned protest against ballot restrictions.

A total of 1,373 people were arrested by police Saturday according to the political monitoring group OVD-Info; Moscow police put the number at above 1,000. Most of those arrested were released Saturday, but roughly 150 remained in custody as of Sunday.

Police used truncheons to beat back protesters around the mayor’s office in central Moscow, resulting in reports of broken bones and head wounds among the demonstrators. The US Embassy in Moscow said Sunday that the strong response represented “use of disproportionate police force.”

Saturday’s protest followed one held during the previous week, when 20,000 people gathered to protest the blocking of opposition leaders within the council.

Ella Pamfilova, head of the electoral commission said the protests would not lead to the commission reversing its decision: “It doesn’t matter, not even a bit of it,” she said. Council elections will be held as planned on September 8.

Navalny was arrested Wednesday and sentenced to 30 days in jail for calling for the protest, which Moscow Mayor Sergei Sobyanin said posed a “security threat” given that it had not been authorized by city officials.

Navalny was hospitalized Sunday due a severe allergic reaction that caused “severe swelling of the face and redness of the skin,” said his spokeswoman, Kira Yarmysh. Navalny had not previously suffered from allergies, Yarmysh said. He remains in custody.

While police estimated that 3,500 people had answered Navalny’s call Saturday, footage analyzed by the Associate Press showed numbers closer to 8,000. Hundreds of the mostly young protesters gathered at the mayor’s office shouting “Russia will be free!” and in marches in other parts of the city, people directly criticized President Vladimir Putin, chanting “Putin is a thief!”

Petrovka, one of Moscow’s most upscale streets has been blocked now with protesters chanting “Putin is a thief” pic.twitter.com/GePZypIUrr

For his part, Putin was in St. Petersburg Saturday presiding over a Navy Day parade featuring 43 ships and 4,000 troops.

“There are a lot of problems on Earth, so to diminish their amount one has to go up and deep down,” Putin said.

The 45-seat Moscow City Authority adopts the budget for the city’s 12.5 million residents and also passes municipal laws. Every seat is up for re-election in an upcoming September 8 vote.

A number of candidates opposed to Putin’s United Russia party prepared to run for seats, and worked to meet changing requirements to get on ballots when council authorities increased the number of signatures needed to appear on the ballot to 5,000.

The signature requirement was meant to discourage support for the opposition candidates, Vladimir Kara-Murza, an anti-Kremlin politician, wrote in an op-ed for the Washington Post.

“The task was made more formidable not only by logistical challenges in the midst of vacation season,” Kara-Murza wrote. “But also because each signature on the petition means volunteering one’s personal information for the government’s database of opposition supporters.”

In response, Navalny said during an address to supporters, “I am proposing a peaceful public compromise: either you register every candidate, or next Saturday we will gather for a rally at Moscow City Hall!”

The candidates were not registered, and the protesters gathered at city hall. Navalny, having been arrested for organizing the protest, was unable to join them.

Dmitry Gudkov, another prominent member of the opposition, wrote on Twitter that the arrest and response to the protests meant that “the last illusion that we are able to participate legally in politics has disappeared.”

Opposition leaders push for more protests, but they may have limited effectiveness

Opposition leaders see this moment as a chance to loosen Putin’s strong grip on Russian politics. They have called for continued protests and have said they will continue to advocate for a change to the Moscow ballots.

A spokesperson for the Kremlin’s human rights commission, which is investigating the protests, called continued demonstrations a “road to nowhere.”

And pressure is mounting on opposition leaders. Police have raided opposition leaders’ homes as well as the offices of Dozhd TV, an independent broadcaster that had lifted its paywall in order to cover the protests.

Police also confiscated computers from Navalny’s Anti-Corruption Fund and Gudkov was arrested as he brought food to detained protesters.

Too, some commentators have said they believe the protests will ultimately hurt the opposition’s ends, particularly if voters boycott elections to show support for opposition candidates who do not appear on ballots.

“Young opposition supporters will not come to the polls, while the older generation whom the authorities are counting on vote out of habit,” Denis Volkov of the Levada Center told BBC News.

“Putin has made it clear that there will be no concessions to the unsanctioned opposition,” Sanovaya said. “He doesn’t consider them politicians. He thinks they are westernized gangsters trying to take over the state.”

This social network for churches is thriving in the coronavirus pandemic
Pete Buttigieg’s favorite author would maybe hate Pete Buttigieg
When and where fall foliage colors will peak, in one map
The Vox Senate interview: Jaime Harrison talks about the coalition of voters needed to win South Car...
Trump and Kim Jong Un won’t sign a deal in Vietnam
Mindfulness meditation in America has a capitalism problem