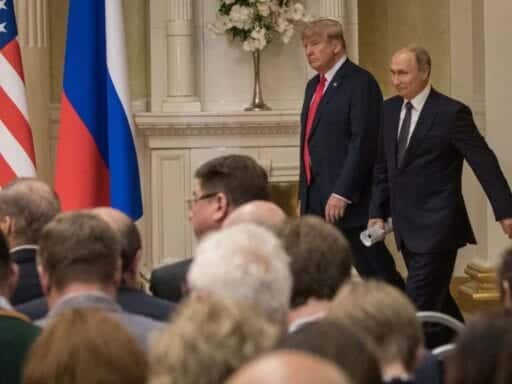 That is the message Putin wants the world to hear.

The meeting this week between President Donald Trump and Russian President Vladimir Putin was either “disgraceful” or “constructive and sincere.” It was a blow to democracy or a win for humanity. It all depends on what coverage you were reading.

The message Russia wanted to share with the world is no mystery — all you have to do is read the headlines on Russia Today, the Kremlin-funded news site. Putin’s propaganda machine wants the world to know that Trump and Putin are best friends, and that together, they will solve some of the biggest threats facing humanity.

“The Cold War is over” was the overall theme of Monday’s headlines on RT.com. Russia and the United States are allies now, the Kremlin says.

The top story carried the headline “Trump: Russian, US militaries get along — perhaps better than our politicians.” It explained that together, the US and Russia were working to defeat ISIS. The story’s first line:

Donald Trump thanked Russia for its help in eradicating Islamic State in Syria, and says that the two countries’ armies cooperate well, despite operating side-by-side in the crowded battlefield in the country.

Another story, with the headline “Russia & United States can compete & work together in energy market – Putin,” said that together, Trump and Putin will regulate the global oil market:

“Russia and US are competitors in oil and gas exports, but there is room for cooperation in regulating the energy market,” said Russian President Vladimir Putin during the Helsinki press conference with US President Donald Trump.

And Trump strongly denied collusion, at least according an article that bore the headline “‘No collusion, I didn’t know Putin to collude with him’: Trump says after talks in Helsinki.” The US president appeared ready, with Putin, to seek world peace:

The US president pledged to work together with Putin on areas of shared interest, including the denuclearization of the Korean Peninsula and the eradication of radical Islamic terrorism, with Trump stating ‘I’m sure we’ll be meeting again in the future, often.

Russia even offered to help the FBI investigate the claims of election interference against Russia, another article stated, with the headline “I wanted Trump to win – Putin.”

Moscow was ready to participate in a joint investigation with the US of any such allegations, however, if any real evidence was presented, the Russian leader said. Such work could be conducted by a joint Russian-US cybersecurity group, the idea of which was floated by Putin during his last meeting with Trump in Hamburg.

This is partly the Russian government’s spin. But Trump didn’t give Russia Today much reason to report otherwise. He refused to condemn Russia for meddling in the 2016 presidential elections — a reality that has grown harder to ignore following the FBI’s indictment last week of 12 Russian agents. He praised Putin and talked about how well they get along. He called the idea of Russia investigating its own election interference “incredible” (in the positive sense).

The Russia Today headlines reflect the message the Kremlin wanted to send. But it’s also true that Trump didn’t push back much on that message either.

Neera Tanden is Biden’s first Cabinet-level nominee to withdraw
The mythology behind the Tiger King’s country music
How to find a therapist during the Covid-19 pandemic
26 million US unemployed, 265 million worldwide at risk of hunger: Thursday’s coronavirus news
Millions of Americans take vitamin D. Most should just stop.
With “Lover,” Taylor Swift shows she can still write a perfect love song