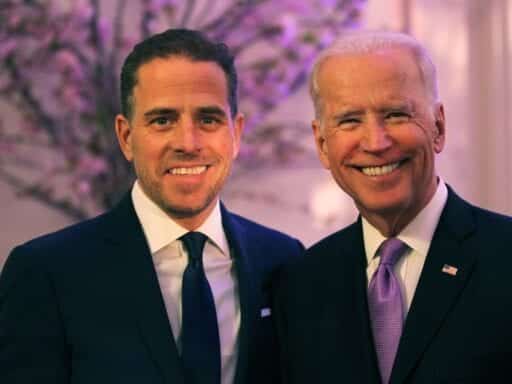 Share
Loading...
Hunter and Joe Biden at an event in 2016. | Teresa Kroeger/Getty Images for World Food Program US

The hacking suggest the Russian government might want to interfere in the US presidential election again.

Burisma — the Ukrainian natural gas company whose board Hunter Biden served on — was hacked by the Russian military late last year, the New York Times’s Nicole Perlroth and Matthew Rosenberg reported Monday, citing a security firm that attributed the hack.

Trump has long been obsessed with the idea that there is some sort of corruption involving Burisma and the Bidens, though he’s had no evidence to prove it. And he tried to pressure the Ukrainian government to investigate the topic earlier this year, a request that spurred a whistleblower complaint from a government official and, eventually, Trump’s impeachment.

The security firm, Area 1, found that the hacking attempts began in early November, around when public testimony in the impeachment inquiry was beginning.

A spokesperson for the Biden campaign, Andrew Bates, said in an emailed statement that the news shows that Russian President Vladimir Putin “sees Joe Biden as a threat.” He added: “Any American president who had not repeatedly encouraged foreign interventions of this kind would immediately condemn this attack on the sovereignty of our elections.”

This isn’t the first time Moscow has hacked organizations in a way designed to affect American elections. During the 2016 campaign, hackers for the GRU, Russia’s foreign military intelligence agency, infamously targeted leading Democratic officials (such as Clinton campaign chair John Podesta) and organizations (such as the Democratic National Committee).

Foreign hackings targeting top political players is nothing new, but what the Russians did with the information was surprising and innovative. They strategically released stolen emails and documents, having many given to WikiLeaks and posting others through their own online persona “Guccifer 2.0” and on a site called “DCLeaks.” The US media then covered the releases, and Trump touted them on the campaign trail. Much of the information released wasn’t particularly scandalous — but some caused controversy. For instance, DNC Chair Debbie Wasserman Schultz resigned after some DNC staffers’ private comments criticizing Bernie Sanders were posted on WikiLeaks.

Special counsel Robert Mueller eventually indicted 12 GRU officials for crimes related to the hacks — but since all of them reside in Russia, none were ever arrested or brought into custody. Trump and his campaign associates were never accused of any involvement in the hacks or any conspiracy with the Russian government, though questions still remain about whether some Trump associates coordinated with WikiLeaks.

The Burisma hack poses the prospect that, once again, the Russians may have obtained unflattering information about someone close to the potential Democratic presidential nominee: Hunter Biden.

Now, Trump’s unfounded conspiracy theory — that Joe Biden forced out Ukraine’s prosecutor general Viktor Shokin to protect Burisma and his son from an investigation — seems to make little sense, as it was the consensus position of the US government and Western institutions like the International Monetary Fund to oust Shokin due to his own corruption and ineffectiveness.

Still, Hunter’s lucrative position on Burisma’s board doesn’t look great. Hunter had no expertise in the field or the region, and his main qualification for the gig appeared to be that his father was vice president and involved in Ukraine policy at the time.

We of course don’t know what material the Russian hackers may have obtained about Hunter and the Bidens from Burisma, exactly — or what they plan to do with it. Is it damaging? Can it be made to look damning, even if it isn’t? Will it be released at key moments in the 2020 campaign, like last time around?

The news also poses a challenge for the US media — about whether journalistic outlets will again cover information released by Russian hackers trying to interfere with the election.

This piece was updated with a statement from the Biden campaign.

To Trump, Europe is “as bad as China” on trade
Mexico is severely — and maybe purposefully — undercounting its coronavirus deaths
Over half of the movies released in the last 50 years were rated R
Trump turns once and for all against Republicans who won’t help him steal the election
The disappearance and death of activist Oluwatoyin Salau, explained
Credit card rewards could become harder to earn