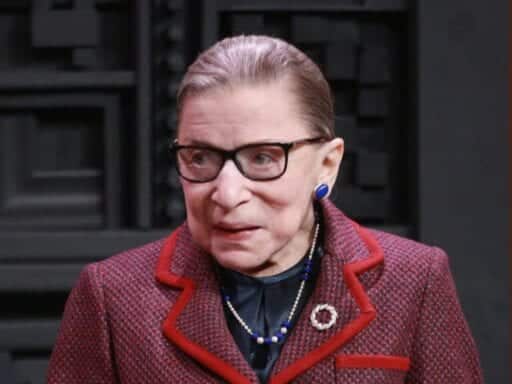 Democrats can breathe a sigh of relief: Supreme Court Justice Ruth Bader Ginsburg — currently 85 — said this weekend that she isn’t planning to retire anytime soon. “My senior colleague, Justice John Paul Stevens, he stepped down when he was 90, so I think I have about at least five more years,” she said in an interview, according to CNN. Her statement comes as Democrats become increasingly concerned about another potential opening on the bench — a development that could remake the Court for decades to come.

In the wake of Justice Anthony Kennedy’s recent retirement (he was 81 when he announced the decision), anxiety has grown among Democrats regarding how much longer justices like Ginsburg and Stephen Breyer will continue to serve. Liberal justices on the Court are, after all, much older than the conservatives ones on average. According to a June compilation by USA Today, the average age of sitting liberal justices is around 71. Meanwhile, the average age of sitting conservative justices clocks in at roughly 62.

Kennedy, though he was appointed by a Republican administration, had been seen as a longstanding swing vote on key decisions including the reaffirming of Roe v. Wade and the legalization of same-sex marriage. Since his replacement will almost certainly be a conservative — whether President Donald Trump’s pick, Brett Kavanaugh is confirmed or not, Trump has vowed to nominate justices from a list of candidates vetted by conservative groups — the Court will likely already shift right. Liberals fear that additional openings could ensure that the Court is further dominated by a majority that favors more extreme positions on issues like abortion rights and health care.

Ginsburg seemed to address this uncertainty during her interview and cited her late husband Marty when discussing a belief that keeps her “hopeful“ about the future. “My dear spouse would say that the true symbol of the United States is not the bald eagle — it is the pendulum,” she said. “And when it goes very far in one direction you can count on its swinging back.”

As Ginsburg notes, her plan is not without precedent

According to a calculation by Business Insider, the past 11 Supreme Court justices, including Kennedy, retired at the average age of 80 after serving for roughly 27 years. Ginsburg’s plan for retiring around the age of 90 puts her on the older end of the spectrum but is not without precedent. As she notes, Justice Stevens — and Oliver Wendell Holmes Jr. — retired at about that time.

In her interview, Ginsburg also threw cold water on the idea of term limits for Supreme Court judges and suggested that imposing them would require alterations to the Constitution.

“Article 3 says … we hold our offices during good behavior,” she quipped. ”And most judges are very well behaved.”