Ruth Negga’s moody, smoky Hamlet is a study in vulnerability 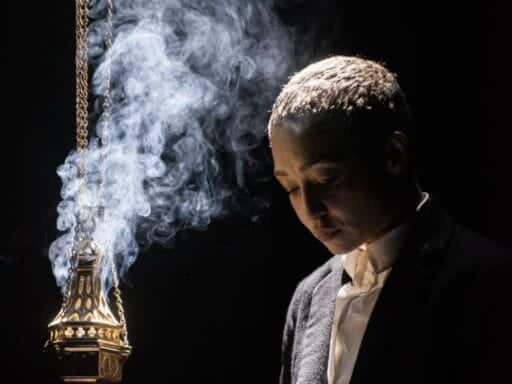 In 1741, Fanny Furnival became the first actress on record to play Hamlet. Furnival took the stage at Dublin’s Smock Alley Theatre to play the melancholy Dane as a publicity stunt during a financial crisis and found the exercise so successful that she repeated it twice. Soon after, more and more women began to follow in Furnival’s footsteps, most famously Sarah Bernhardt in 1899. And now, nearly 300 years after Furnival’s pioneering turn, the actress Ruth Negga is starring in Gate Theatre Dublin’s production of Hamlet, which has now transferred across the Atlantic to New York’s St. Ann’s Warehouse.

This Hamlet really does belong to Negga. Under Yaël Farber’s direction, Shakespeare’s famously interior play turns ever more inward. Hamlet’s psyche, even more than usual, is at the center of everything. Susan Hilferty’s psychoanalytical set and costumes (both modern day) are built as metaphors for Hamlet’s mind; the rest of the able cast swims in and out of focus, as Hamlet considers and then discards their characters.

Negga owns the stage. Nominated for an Oscar for her role in 2016’s Loving and star of TV’s Preacher, she plays an uncanny Hamlet. (Her Hamlet is male, with the original male pronouns maintained throughout the show.) Onscreen, her presence is weighted with gravitas, but in the theater, brute physics come into play, and the 5-foot 3-inch Negga automatically becomes the show’s most vulnerable figure onstage. When Claudius (Owen Roe), in his unbuttoned SS uniform, looms over tiny Hamlet in a closely buttoned suit, the sheer contrast of their sizes means Claudius is making a physical threat.

And, in turn, Hamlet’s newfound vulnerability means that when he puts on his antic disposition and moves like a madman, he is dramatically reshaping the existing power structures of his world: He is taking up more space. Negga throws herself into a sprawl across Claudius’s throne, climbs into Ophelia’s lap, twists her limbs like she’s fending off demonic possession as she crab-walks her way in front of a sanctimonious Polonius. Her eyes gleam darkly, and it’s clear that however much Hamlet’s madness might be real or feigned, he’s relishing the chance to exert physical, bodily influence over his space.

That space is heavily symbolic. Susan Hilferty’s set is a series of doors that open on to nothing but ever more doors, like the map of a mind that’s been, like Hamlet’s, “confined to a nutshell” with bad dreams. It’s covered in an oily slick of dark and iridescent paint, but periodically significant colors splash across it: the green of money and the state, in the form of a throne; the red of sex and sin in Gertrude’s satin-draped bedroom; the merciless and earthy brown of death in the grave dirt that strews across the stage in the final act.

We also meet death in the form of three grave-makers (Will Irvine, Ger Kelly, and Gerard Walsh), who between them split the traditional role of the gravedigger into three and serve double duty as the players of the play within a play. Bowler-hatted and cigarette-smoking, they lurk along the edges of the stage in the liminal territory between life and death, and it’s they who escort Aoife Duffin’s bright-eyed and smirking Ophelia from the first to the second. They’re ever-present and not quite sinister, suggesting at once Macbeth’s witches, a threefold deity, and — perhaps most pressingly in this very Irish Hamlet — the Catholic trinity.

Catholicism looms large in Farber’s production of the play, which is overwhelmingly concerned with sin and all the ways in which sin has corrupted Hamlet’s family and Denmark’s government. In the wake of Gertrude’s union with Claudius, Hamlet seems incapable of interpreting any familial relationship as being untinged with incest: Gertrude (Fiona Bell) makes her entrance splayed out on a bed in a pose that is at once crucifix and pinup, and Hamlet reacts to her with equal parts desire and fear. Hamlet leers as he insinuates that Polonius loves his daughter Ophelia “passing well,” and when he challenges Ophelia’s brother Laertes to a duel over Ophelia’s corpse, he’s acting out of romantic jealousy at the sight of Laertes cradling his sister’s body like a lover.

Redemption for sin can come only with repentance. But as Claudius confesses to his priest in a pungent reimagining of his “o, my offense is rank” soliloquy, it is impossible to truly repent when you’re still enjoying the wages of your sin. And no one in this grim, power-obsessed landscape is ever going to willingly give up either power or pleasure.

But no matter who has political power in Denmark at any given moment, it’s Negga who has all the power on the stage, and she never lets us forget it. By the time she’s declared that the rest is silence, she’s taken us so thoroughly inside Hamlet’s frantic, unresting mind; it feels as though we’ve walked through every door on that smoky stage. She proves that 300 years after Fanny Furnival’s famous turn, casting a woman as Hamlet can be far more than a publicity stunt.

BTS, the band that changed K-pop, explained
Facebook has already detected suspicious activity trying to influence the 2018 elections
Bill McKibben has been sounding the climate alarm for decades. Here’s his best advice.
Inside Mark Zuckerberg’s tense meeting with Facebook employees: Transcript
Congress just passed a border security deal
Hospital ICUs are filling up. It’s even worse than it sounds.