Ryan Zinke to the oil and gas industry: “Our government should work for you” 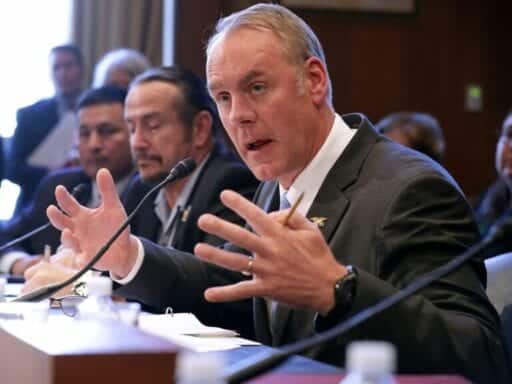 The interior secretary’s latest gaffe was a pledge of allegiance to fossil fuels.

Interior Secretary Ryan Zinke let the mask slip this week, turning the subtext of his term in office into the headline as he spoke to a friendly audience.

On Tuesday, Zinke gave the keynote address at the Louisiana Oil and Gas Association’s fall meeting in Lafayette, Louisiana. He told the conference over lunch “our government should work for you,” according to organizers:

You can debate what Zinke meant by “work for you,” but many heard it as a pledge of allegiance to the industry.

And according to the Louisiana Oil and Gas Association, the industry members in the room were thrilled with the pledge, giving Zinke a standing ovation. (An organizer told me none of the speeches at the event were recorded.)

However, environmental activists and some lawmakers were appalled by the statement.

Behind closed doors Ryan Zinke just told a meeting of industry lobbyists “Our government should work for you, the oil and gas industry.”

Your periodic reminder that Trump’s culture of open corruption could not happen without a GOP rubber stamp Congress. https://t.co/YDJg5wYjOQ

And then that evening, Zinke’s official Twitter account went into damage control mode, implying the message was meant for a broader audience rather than just the industries he’s supposed to regulate.

Government should work for you. Period.

For the record, the Interior Department’s job is to manage about 75 percent of federal public land, which amounts to about one-fifth of the total area of the United States. This means conservation, preserving culture, and facilitating recreation. It also entails leasing rights to mining, drilling, grazing, and logging. However, it does not mean that the agency needs to advance the fossil fuel industry’s interests, certainly not at the expense of the environment.

But the Interior Department under Zinke has been pushing much harder to open up public lands to private companies while drastically rolling back its environmental responsibilities.

“Our mandate is multiple-use of public lands, and multiple-use also includes the development of natural resources as we seek to leverage American energy for American strength,” Zinke wrote in the department’s 2018-’22 strategic plan.

One place we’ve seen Zinke pick sides is in his response to California’s record wildfires. Rather than acknowledging the role of climate change in increasing fire risks, he blamed “environmental terrorist groups” while calling for more private logging on public lands.

Since Saturday is National Public Lands Day, it’s worth noting that under Zinke, we’ve seen the largest rollback of federal land protections in US history. He also opened nearly all US coastal waters to offshore oil and gas drilling, preparing for the largest lease sale in US history. The National Park Service, which is part of the Interior Department, proposed more than doubling national park entrance fees before settling on increases of $5 to $10.

The Bureau of Land Management, also part of the Interior Department, announced this week it was revising its rules on methane emissions from gas drilling on public lands. Interior is also pushing for more roads in wilderness areas, dialing back conservation plans for wildlife, and selling leases for Arctic oil and gas drilling. The agency canceled a study looking into the health impacts of coal mining and dismissed violations committed by coal companies.

Taken together, it’s pretty clear who Zinke is working for.

Is Ryan Zinke the next Scott Pruitt?

However, the Trump administration has the odd habit of stumbling over itself. President Donald Trump’s trade war is already threatening to undo gains for the fossil fuel industry as China readies tariffs on US energy.

Zinke himself tendencies exhibited by former EPA Administrator Scott Pruitt that have invited scrutiny from lawmakers. He’s opaque with his schedule, obscuring his dealings with the energy industry. He took a $12,000 flight on an oil executive’s charter plane. He was involved in a land deal with the chair of Halliburton, which may have violated conflict of interest rules. The Government Accountability Office had to end a probe in June into whether Zinke threatened Sen. Lisa Murkowski (R-AK) over her vote on Obamacare because the Interior Department didn’t cooperate.

He also has his office fly a secretarial flag when he’s in the building and minted his own challenge coin.

With Pruitt no longer sucking the oxygen out of the room, congressional Democrats are now eyeing Zinke and have promised more investigations of his conduct should they take control of the House in the fall.

“Zinke is one the most ethically challenged members of the Cabinet and maybe one of the most ethically challenged secretaries of the Interior we’ve had in living memory,” Rep. Gerry Connolly (D-VA), who could chair the House Oversight Government Operations Subcommittee if Democrats win in November, told Politico this week. “[There’s] rich material here to look into his behavior and his fitness for continued service in the office.”

Trump’s RNC speech was a mess. But the optics of it were powerful.
Live results: Ballot initiatives on democracy reform
How Awkwafina established her dramatic bona fides without disrupting her star image
Brazil’s Jair Bolsonaro gets coronavirus after months of downplaying the pandemic
Why prediction markets are bad at predicting who’ll be president
A new poll shows a startling partisan divide on the dangers of coronavirus