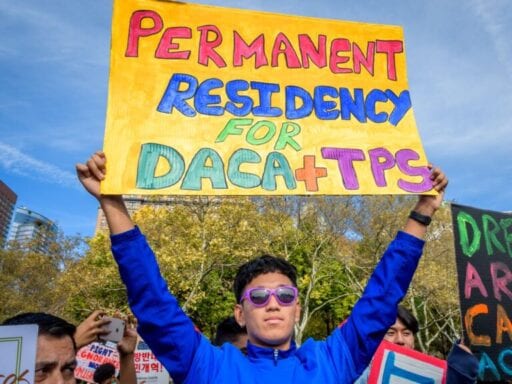 Salvadorans living in the US with temporary legal status will be able to remain in the country for another year, after the Trump administration signed agreements on Monday expanding cooperation between American immigration authorities and their counterparts in El Salvador.

About 265,000 Salvadorans in the US have Temporary Protected Status, which the US has historically offered to citizens of countries suffering from catastrophes such as natural disasters or armed conflict. Many of the Salvadorans with TPS status have lived in the US for more than a decade; the Bush administration first offered them protection in 2001 following a series of devastating earthquakes.

After President Donald Trump took office, he tried to end TPS status for El Salvador, Haiti, Nicaragua, Sudan, Honduras, and Nepal, asserting that conditions in those countries have changed such that their citizens can now safely return. But federal courts have so far kept TPS alive after advocacy groups claimed that, for many TPS recipients who have laid roots and raised families in the US for years if not decades, going back on a moment’s notice isn’t a viable option.

TPS was previously set to expire for Salvadorans on January 2, 2020, but Monday’s agreements will push that date back. Salvadorans will now have valid work permits through January 2, 2021, even if the courts uphold Trump’s attempt to end the program. After the lawsuits over TPS conclude, the Salvadoran TPS recipients will have another year to go back to their home country.

Acting Department of Homeland Security Secretary Kevin McAleenan characterized the cooperation agreements as a step toward implementing another agreement between the US and El Salvador. That agreement would allow the Trump administration to send migrants seeking asylum or other protections in the US back to El Salvador. The US has also reached similar such asylum agreements with Guatemala and Honduras.

“Today’s agreements will significantly help the US and our partners in El Salvador confront illegal migration and will strengthen the entire region as we approach the implementation of asylum cooperative agreements,” McAleenan said in a statement.

The Ninth Circuit could rule any day now in one of the cases over the Trump administration’s decision to end TPS. No matter the decision, it will likely set up a high-profile showdown over TPS at the Supreme Court. If the Trump administration prevails, it had previously agreed to establish a minimum 120-day wind-down period for El Salvador and the other countries.

Is El Salvador too dangerous for migrants? Or is it safe enough for asylum seekers?

The US ambassador to El Salvador, Ronald Johnson, said in a video announcement in Spanish on Monday that the agreements constituted an “extension” of TPS.

That might create a legal quagmire for the Trump administration. A formal extension of TPS would require the US to determine that the conditions in a country remain too unsafe for recipients to return there. The administration would have a hard time reconciling that position with its asylum agreement with El Salvador, which requires the country to have the capacity to accept asylum seekers.

Acting US Citizenship and Immigration Services Director Ken Cuccinelli contested that it was a formal extension of TPS in a tweet:

(2/2) A clarification: some reporting has spoken of “extending TPS.” That has important legal meaning, and that’s not what happened w/ the agreements. Rather, work permits for Salvadorans will be extended for 1 year past resolution of litigation for an orderly wind down period.

Immigrant advocates have said that El Salvador, which has the highest homicide rate worldwide by the UN’s estimate, is far from ready to start accepting asylum seekers.

“These countries do not have any kind of infrastructure for dealing with asylum claims,” Kerri Talbot, director of federal advocacy for the Immigration Hub, told reporters on Monday.

Monday’s agreements allow the US to send officials from US Customs and Border Protection and US Immigration and Customs Enforce to El Salvador to “advise and mentor” the Salvadoran authorities in the police, border security, immigration, and customs on matters relating to criminal investigations and human and drug trafficking. They will also increase El Salvador’s collection and sharing of biometric data with US law enforcement.

While immigrant advocates celebrated the announcement that Salvadoran TPS holders would be allowed to remain in the US for another year, they are still pushing Congress for more permanent protections for all TPS holders.

The Dream and Promise Act, which passed the House in June, would have made TPS holders who have lived in the US for three or more years eligible to apply for a green card and, eventually, US citizenship. Even though it’s unlikely the bill will be put to a vote under a GOP-controlled Senate, Democrats still see that as their baseline for negotiation, Talbot said.

Early voting in Georgia’s Senate runoffs is massive — but what does that mean?
WeWork is being sued for allegedly enabling sexual harassment
John Oliver: Kavanaugh’s Senate hearing was a “fuck you” to women
Singapore’s Covid-19 case fatality rate is remarkably low. Why?
Amid calls for his removal, Trump says he’ll support the transition to a “new administration”
Trump refuses to say the QAnon conspiracy theory is false