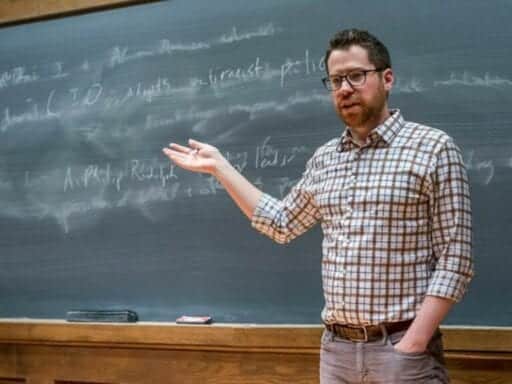 On The Ezra Klein Show, the political scientist explains how Republicans and Democrats became so divided.

On this week’s Ezra Klein Show, Sam Rosenfeld, a former reporter and the author of The Polarizers: Postwar Architects of Our Partisan Era, discusses the history of polarization, his revelation that our current system of polarization is a direct result of lobbying, and why politicians like Richard Nixon, John F. Kennedy, and Franklin Delano Roosevelt all disagreed with splitting political parties based on ideological differences.

When asked for his book recommendations, Rosenfeld was clear that his are “books that people could actually go out and buy, and would enjoy reading.” His three choices fit the bill, assuming you’re the type of person who enjoys reading histories of congressional power struggles, shifting political parties, and/or social policy in the United States.

1) On Capitol Hill: The Struggle to Reform Congress and Its Consequences, 1948-2000 by Julian E. Zelizer

Historian Julian Zelizer’s book about constitutional reform was a direct influence on Rosenfeld’s The Polarizers. Rosenfeld was assigned to review it when it was published in 2006, and enjoyed that it “has real actors and a kind of narrative.” It’s an interesting contrast to our current political climate because it tells “a story in which liberals who ended up lamenting some of this [polarization] in the Bush and now Trump eras have reasons to want to make politics in the United States more partisan.”

2) Making Minnesota Liberal: Civil Rights and the Transformation of the Democratic Party by Jennifer A. Delton

Jennifer Delton’s book on Hubert Humphrey’s project of consolidating the Minnesota Democratic Party with the left-wing Farmer-Labor Party is in some ways a very narrowly focused narrative. However, according to Rosenfeld, it’s “also a study of Cold War liberalism and how civil rights for white liberals in the North came to be such a keystone of postwar politics.”

3) Social Policy in the United States by Theda Skocpol

Theda Skocpol is “a kind of titan of political science and sociology,” according to Rosenfeld. Social Policy in the United States is a collection of her writings from the ’80s and early ’90s that trace how American social policy on health care, Social Security, welfare, etc. came to be. He often assigns Social Policy in the United States to his students, saying that when he read it for the first time in college, he thought “this is how to look at the world and make sense of it — this kind of approach that takes history and institutions and movements seriously as the engine of what makes the world tick.”

You can listen to the full conversation with Sam Rosenfeld on The Ezra Klein Show by subscribing on Apple Podcasts or wherever you get your podcasts, or by streaming the episode here:

The weekend in impeachment news, explained
What the heck is going on with TikTok and Oracle, explained
The US military may have spent millions to help prop up a Trump resort
Sen. John Cornyn showed he has no idea what systemic racism is
The world is careening toward a cliff. There’s never been a better time for Joss Whedon’s Angel.
How wearing masks will change us